Our feedback inboxes were choked with questions about gold this week. But before we get to that…

I use E-Trade and when I tried to enter a sell for my 40% stop loss, E-Trade only gave the following options to select from: Market, Market on close, Limit, Stop on quote, Stop limit on quote, Trailing stop $, Trailing stop %. I’d like to add that both the Stop on quote and the Stop limit on quote required me to enter an amount and not a percentage as would be for Trailing Stop %. Which should I choose?

Great question, Dennis. And we’ve got an answer for you… although it’s probably not what you and other new readers are expecting…

At Legacy Research, we advise against setting automatic stops in your trading platform. Here’s why…

If you set automatic stops on your positions, the big brokerages can see the price at which you’re willing to sell your shares. And they can see that same information for everyone else who sets an automatic stop, too.

Sometimes, those “market makers” will place big bids on a stock below a popular stop price. That pulls down the price and triggers the stop, forcing ordinary investors to get “stopped out” of their positions at an artificially deflated price.

Then, the market makers scoop up the stock at the lower price. And with their lower bids now satisfied, the market returns the stock to its “normal” price. That lets those big institutions rake in big profits in a very short amount of time.

It’s not a fair practice, but unfortunately, it happens all the time.

So, make a note of our stop prices and keep an eye out for any updates from our Legacy Research experts. We’re constantly monitoring the equities in our model portfolios and will alert you if any actions are necessary, including when stops are triggered by legitimate market action.

And now, let’s get to gold. First up, a question for our natural resources expert, Dave Forest (International Speculator)…

Reader question: I hear that, if we have an economic collapse in the next year, oil prices could collapse down below $30 per barrel. It would likely also depress all commodities prices.

What is going to happen to gold and silver in such a collapse? Would they suffer the same extreme devaluation as other commodities? Thank you and best.

So where exactly should we position ourselves to protect our wealth and profit if another crash emerges?

To give a clear picture, we plotted their performance during the three “acts” of each crisis:

This showed us a few things.

First, it showed which metals did well in the boom time just before a crisis.

Second, it showed which metals were the best store of value during investor panic.

Third, it showed which metals are best to buy at the depths of a crisis in order to profit from the recovery that’s historically taken place the year following a crash.

Here’s how that picture looks… Below is the average performance for those five metals during the last four big crises: 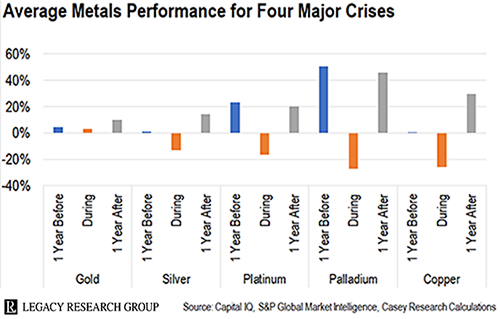 As you can see, gold was the only metal to increase before, during, and after the last four major market crises.

So what’s the investment takeaway here?

When markets are exposed to a significant correction or crash – like today – be very selective with exposure to the major base metals. The best strategy is to buy base metals firms that also hold significant precious metals exposure.

That’s why gold, gold stocks, and even gold ETFs are your best bet right now.

Brendan isn’t the only one worried about gold.

We got a bunch of questions for one of our biggest gold bugs – master trader Jeff Clark (Delta Report, Delta Direct, Jeff Clark Trader, and Market Minute).

Reader question: What is your outlook for gold for the next year? I am a bit overweighted in gold but think it is a bit early to take even partial profits. Thanks.

Reader question: What would you expect gold to do when stocks tumble this fall? Also, do you think gold will continue its recent rise into fall? Do you think real money can be made during the coming downturn? That’s why I signed up with you. I’m counting on you! Thanks for your frequent updates.

Jeff’s answer: Well, I’m quite confident gold will be higher in December than it is right now. My concern though is, in the short term, everybody’s gotten a little bit too bullish.

Gold stocks have had a great run, too. But they are now trading historically far above the relative moving averages. That alone doesn’t concern me, but there are signs that relative to previous gold bull runs, the momentum behind this move is slowing down.

That’s a caution sign. That tells me that maybe we’re running out of steam.

I have a feeling we’re probably going to see some weakness in gold stocks over the next couple of weeks. That doesn’t change my outlook for the rest of the year, though.

I think gold stocks are going higher the rest of the year, and I’m looking forward to using any decline as a chance to add exposure to the gold sector. So I like it. I just don’t like it right now.

I think traders will have a chance to buy gold stocks probably in the next three or four weeks at a cheaper price than they are right now.

And you’ll know when it’s time, because when I say, “It’s time to buy,” you’ll think I’m crazy because everybody else will have turned bearish on gold stocks. Just like everybody seems to have turned bullish while I’m taking the other side. That seems to happen quite often.

Reader question: I totally agree with Jeff that there are so many metrics (including the VIX) indicating a “correction” (or crash) is on the horizon. But we have a president who likes to manipulate the market with his tweets, plus he’s constantly beating up on J. Powell to lower interest rates… AND it’s his third year going into an election so he can’t afford to let the market crash. What does Jeff have to say about this?

Because of all of the above, I’ve been positioned VERY conservatively and have clearly been on the wrong side of the market. We’re entering a new earnings season and I suspect a lot will now depend on the results. Plus, if we start another war, all bets are off.

Jeff’s answer: Hi, Billie. Thanks for the great question. There is a certain bullish comfort in knowing that the stock market almost never declines during the third year of an election cycle, and that the president and the Fed are motivated to keep the stock market higher. It certainly makes anyone with a bearish tilt look a little bit foolish.

I was watching one of the financial networks a few days ago. One of the talking heads was raving about how this year had the best first-half performance of any year since 1987. He was wildly bullish for the rest of 2019. He scoffed at the thought of a market decline for the very reasons you mentioned.

In 1987, the S&P 500 gained about 20% during the first half of the year. It was also the third year of an election cycle. And there was a certain bullish comfort in knowing that this thing called “portfolio insurance” could be used by institutions to prevent any sort of serious market decline.

Of course, we all know what happened later in 1987.

It is worth noting, though, the stock market still finished up about 4% in 1987. So, the third year of an election cycle was bullish. But, if you bought stocks aggressively in July of 1987 you probably didn’t feel too bullish by the end of the year.

I think folks who are buying stocks aggressively right now might end 2019 feeling the same way.

Look… we all know the third year of an election cycle is bullish. We all know the president and the Fed want a higher stock market. I’m just arguing that maybe the market has already priced that in. And, with the CBOE Volatility Index (VIX) at such a low level, investors are probably too complacent. That’s usually when the market turns ugly.

For now… the music is still playing. So, you don’t have to leave the party just yet. It’s probably not a bad idea, though, to dance a little closer to the exit.

Jeff’s been preparing his subscribers for a market crash all year. And just a few months ago, he predicted the exact date he expects it to happen.

Read on here for more details – including Jeff’s strategy to help readers profit no matter what the market does.

And now… one last request for Jeff (aka Mr. Popular this week). It’s a quick one…

Reader question: Please recommend two practical investment books for someone who has no education in this field.

Jeff’s answer: For “practical” investment education, I like The Little Book That Beats the Market, by Joel Greenblatt.

And, for a deeper understanding of investor psychology, you can’t do any better than to read Charles Mackay’s Extraordinary Popular Delusions and the Madness of Crowds.

Have a nice weekend!

For those of you who were there, you may remember managing partner Amber Mason asked all the panelists… “What book would you recommend to everyone here today?”

If you couldn’t make it last year, here’s the rest of the Legacy Research summer reading list…

◦  The Enchiridion, by Epictetus

◦  My Adventures With Your Money: George Graham Rice and the Golden Age of the Con Artist, by T.D. Thornton

◦  Extraordinary Popular Delusions and the Madness of Crowds, by Charles Mackay

◦  Zen and the Art of Motorcycle Maintenance: An Inquiry Into Values, by Robert Pirsig

◦  Beyond Biocentrism: Rethinking Time, Space, Consciousness, and the Illusion of Death, by Robert Lanza with Bob Berman

◦  How I Found Freedom in an Unfree World: A Handbook for Personal Liberty, by Harry Browne

◦  The Bitcoin Standard: The Decentralized Alternative to Central Banking, by Saifedean Ammous

◦  Reminiscences of a Stock Operator, by Edwin Lefèvre