Your fellow readers have been sending their questions in totheir favorite Legacy Research analysts.

This is where we feature their responses

So if you have a question you’d like answered, drop us a line at [email protected].

First up today, one reader has a great question on an investment theme we covered earlier this week in these pages – the comeback of nuclear power.

And standing by with an answer is former Wall Street insider Nomi Prins.

She’s our macro – or big picture – expert here at Legacy. And one of the opportunities she’s spotted is in the energy market.

In fact, this week, Nomi went live with an urgent briefing about the chaos in energy markets… and how you can profit.

As you know, energy markets have been in turmoil all year. That’s partly due to Russia’s invasion of Ukraine… and its weaponization of oil and natural gas exports to countries that disapprove of its landgrab.

It’s also due to the efforts by governments to move away from fossil fuel-based power sources to generate electricity in favor of fuels that don’t release carbon.

Wind and solar will play a role. But so will nuclear. In fact, Nomi believes nuclear power will be one of the big winners of the energy war.

But not all her readers are fully onboard…

Reader question: I’m really enjoying your Inside Wall Street e-letter and the debate about energy.

Can nuclear be considered safe, given we have yet to come up with an environmentally friendly way of dealing with nuclear waste?

Are we not leaving a toxic legacy for future generations in the hope that someone may find an answer in the meantime?

Nomi’s response: Hi, Carole. Thanks for writing in with such an important question. My hunch is it’s on lot of readers’ minds right now.

Nuclear waste is radioactive. If it’s not properly managed, it could be a risk to the environment. And prolonged exposure or high doses could also damage our DNA and lead to us developing cancer.

I say “could” because since the advent of the civil nuclear power industry in the 1950s, properly managed nuclear waste has never caused anyone harm.

Two key questions often go unaddressed in the nuclear waste debate. How much waste does nuclear create? And how long before it’s no longer dangerous?

Nuclear fuel is highly energy dense. You don’t need a lot of it to produce a lot of power. And nuclear power creates a relatively small amount of waste.

For example, a typical nuclear power station produces 1 gigawatt (GW) of power per year, on average. That’s enough to meet the electricity needs of more than 1 million people.

But it produces only three cubic meters of high-level waste per year. And it releases no carbon dioxide (CO2) – one of the gasses that heats our atmosphere and drives climate change.

Plants keep their waste in wet storage facilities called spent fuel pools for up to 20 years. After that, they put it into large concrete-steel silos – known as dry casks – awaiting permanent disposal in an underground geological repository.

By comparison, a coal-powered plant that generates 1 GW of power produces roughly 300,000 cubic meters of toxic ash waste each year. And it releases more than 6 million tons of CO2.

Most power plants dispose of the ash waste in surface impoundments or in landfills. Others – especially in developing countries – discharge it into a nearby waterway under the plant’s water discharge permit.

“High-level” nuclear waste just means it’s highly contaminated. This comes mostly from spent nuclear fuel. And it’s important to note that this type of nuclear waste makes up only 3% of the total waste volume of a nuclear plant.

France is the most nuclear-intensive country in the world. Nuclear accounts for about 70% of its total electricity production. And when they reprocess the fuel from its reactors, just 0.2% of all radioactive waste by volume classifies as high-level.

Lightly contaminated items – up to 1% total radioactivity – such as tools and work clothing make up about 90% of all nuclear waste. They’re routinely discarded in near-surface disposal facilities due to their low… and brief… radioactivity.

Of course, coming up with better disposal solutions for nuclear waste should be topping the industry’s list of priorities. It’s still a work in progress. But things are starting to fall into place.

A case in point is nuclear fuel recycling. Most folks don’t know it, but most of the material in used nuclear fuel can be recycled.

And although some nations – most notably the U.S. – continue to treat used nuclear fuel as waste, others have started recycling it to generate more power. These include France, Russia, and Japan.

Designs for advanced reactors that run on used nuclear fuel have already been developed. The trick is getting this to a commercial scale to ensure it’s done economically.

If these efforts prove successful, it would be a game-changer for the industry.

There are also interesting things happening in Finland. A first-of-its-kind deep geological disposal site is due to enter operation there in 2025.

The consensus is that disposal deep underground is the safest way to store high-level nuclear waste.

The pioneering facility is called Onkalo, which means “cavity” or “pit” in Finnish. Engineers are building it 400 to 430 meters down into the bedrock. It will cost about $3.5 billion. And trial runs will start in 2023.

If it’s successful, it will be the world’s first permanent nuclear waste disposal site.

Other countries have developed plans for similar sites ­– including France, Sweden, Japan, and the U.S. They’re watching the progress at Onkalo as they advance in their own efforts toward geological disposal.

Right now, there’s still a lot of confusion and anxiety over nuclear. But I believe that will change as we focus more on cutting our carbon emissions… and see nuclear is one important way we can do that.

Sticking with the subject of nuclear power, our tech investing expert, Jeff Brown, addresses one reader who wants to know why we don’t use it more to replace diesel as a transport fuel…

Reader question: We know nuclear fission provides dependable carbon-free power. It’s been used in naval applications for almost 70 years. If it can power aircraft carriers, cruisers, and submarines, why hasn’t this technology been adapted for commercial use – powering container ships, tankers, etc.?

This would significantly cut pollution and carbon emissions from the shipping industry.

Jeff’s response: Hi, Jeff D. Thanks for sending in such fascinating question. I had a lot of fun digging into this one for you.

I reached out to speak to someone with direct working knowledge of this subject. For confidentiality reasons, I won’t reveal his name. He trains personnel to work on nuclear-powered military vessels for the U.S. Navy.

Here’s what he told me…

It is theoretically possible for commercial tankers and cargo ships to use nuclear power for propulsion, like U.S. Navy submarines do. But there are several problems with rolling out this technology at scale for commercial use.

First, there is a small talent pool of folks trained to operate nuclear-powered vessels. And as you might imagine, almost all of them are in the Navy.

It is also expensive to train these folks. Getting certified to operate a nuclear-powered vessel takes two years of intense training. It typically costs upward of $200,000. The Navy is willing to pay these costs. But for private businesses, training costs would eat into companies’ margins.

Nuclear vessels also require more trained personnel than you might imagine. It takes about 20 people to crew a regular commercial cargo ship. A nuclear submarine requires more than three times that amount of trained personnel.

And there’s another issue – size.

The U.S. military has proprietary engineering that reduces the overall size of the nuclear propulsion system. Obviously, my contact couldn’t reveal any specific details on these plans. Keeping this stuff secret matter of national security. But he could tell us that – even with the size reduction – half of the space on a submarine is dedicated to these systems.

Without these designs, commercial vessels would have to rely on commercially available systems. These are bulky and would take up significantly more room on a commercial vessel than a diesel engine. And a cargo ship needs as much room as possible to store cargo.

Finally, the cost to build these ships is prohibitive. It’s difficult to estimate. But we know a nuclear submarine can cost as much as $4 billion. Large cargo ships – by comparison – typically cost closer to $100 million.

Also, to run the small nuclear reactors that propel aircraft carriers, submarines, and cruisers, you need highly enriched uranium. Far more enriched than a land-based nuclear reactor. The more the uranium is enriched, the better the power density.

For all these reasons, we likely won’t be seeing nuclear-fission-powered cargo ships anytime soon. But what about nuclear fusion?

A company called Avalanche Energy that I recently spotlighted for my readers is developing a compact nuclear fusion reactor small enough to be carried by a human.

It’s called the Orbitron. Here’s a picture to give you an idea of the scale we’re talking about… 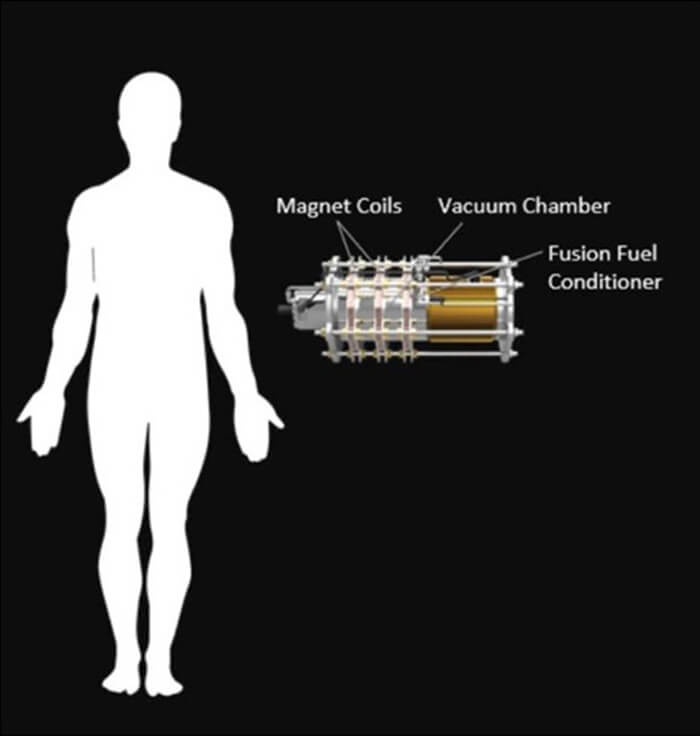 Avalanche Energy hasn’t commercialized this technology yet. But it’s one of the companies I’m most excited about in the energy industry right now. If it’s successful, this kind of reactor could be the answer to commercially viable nuclear propulsion.

Finally, the controversy in the Daily Cut mailbag over who blew up the Nord Stream 2 natural gas pipeline continues.

As I showed you in Wednesday’s Cut, on Monday, two explosions were picked up off the coast of Denmark in the vicinity of Nord Stream 2, which runs from northwestern Russia into Germany.

This caused natural gas to leak into the Baltic Sea. And it’s rendered the pipeline unusable.

I suggested that it could have been the U.S., but that Russia was likely to blame.

Remember, although there was gas in the Nord Stream 2 pipeline, it’s never been operational. Germany refused to greenlight it in the lead-up to Russia’s invasion of Ukraine. And given how bad relations are between Germany and Russia right now, the chance of it starting up operations are vanishingly small.

So although it’s a potential revenue source for Russia… it’s unlikely to ever bring in any cash.

But I’ve gotten some hard pushback on that theory…

Reader comment: You are struggling to see what or how this would benefit the U.S.? Seriously?

We block a revenue source for Russia that we can conveniently fill with our more costly LNG (liquified natural gas).

On top of that, without Nord Stream 2, it removes a source of leverage that Russia has over Europe. It’s entirely possible Biden’s advisers thought this was a great idea, but as usual, didn’t fully grasp the consequences that may happen now that it’s done.

That’s all we have time for this week. You can send your most burning questions for Nomi, Jeff, and the rest of the Legacy team at [email protected].

I’ll do my best to get you an answer.