And good luck protecting yourself with “safe haven” bonds.

This has been the most devastating year for bondholders since at least 1926.

Going by the iShares 20 Plus Year Treasury Bond ETF (TLT), long-dated Treasury bonds are down 31% so far this year.

It’s down almost 9% this year.

Meanwhile, central banks are jacking up rates to combat inflation. This is pushing economies into recession… if they’re not there already.

If you’re losing sleep over all of this, you’re not alone. It can seem like nothing is working for us as investors right now.

But here at the Cut, we’ve been focused on strategies you can use to protect… and even grow your wealth… through this bear market.

We’ve looked at how buying “fractionalized” art and collectibles helps you sidestep the carnage in stocks and bonds.

Today, we’ll continue that mission by looking at the role dividend stocks can play in helping you sleep better at night… while still growing your wealth over time.

As you’ll see, dividend stocks may not shoot to the moon in bull markets… but they won’t crash and burn in bear markets either.

Dividends allow you to collect regular income on stocks…

Companies pay this income out of their earnings. This typically hits your brokerage account every quarter.

Of course, companies have a choice. They could spend their earnings buying other companies… building new plants… expanding overseas… or going on hiring sprees.

That’s why 62% of publicly traded stocks on major exchanges in the U.S. don’t pay a dividend. They’re prioritizing growth. So they choose to spend their earnings on growing their market share.

That leaves 38% of all publicly traded stocks that pay a dividend. These are typically in companies that prioritize stability over growth.

They provide services folks can’t do without, such as heating and water. This gives them a reliable customer base. Plus, it gives them a steady flow of revenues… no matter what the economy is doing.

And if a utility wants to expand its operations, it knows it will earn a regulated rate. This gives it a predictable return on investment.

These are the staple items we buy in good times and in bad.

That gives them more stable revenues than, say, a startup electric vehicle maker.

Consistent dividend payers also set themselves apart just by the fact that they can keep paying a dividend.

And those are the kind of stocks you want to own in the challenging times like we’re in today.

That’s the story this next chart tells.

It contrasts the return this year of the SPDR S&P 500 ETF Trust (SPY) and the iShares Select Dividend Fund (DVY).

SPY tracks the largest 500 companies headquartered in the U.S. – whether they pay a dividend or not. DVY tracks 100 U.S. stocks with at least a five-year track record of paying dividends. 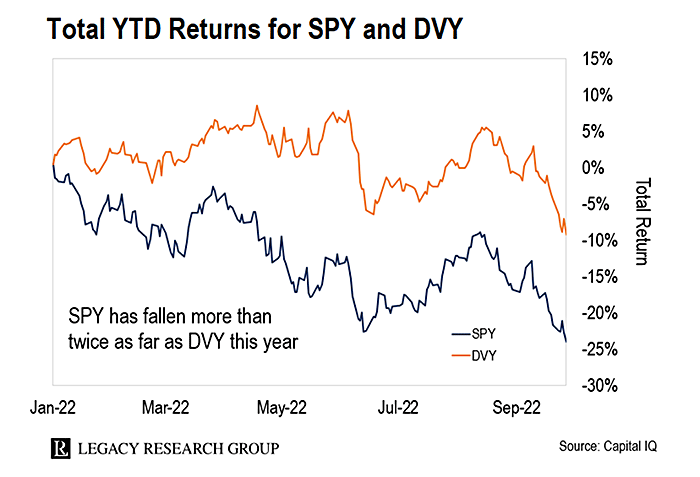 But those are the funds’ returns before you factor in dividends.

DVY has an annual dividend yield of 3.5%. That’s more than double the yield on SPY.

Almost 40% of the stocks DVY holds are in the utilities and consumer staples sectors. Just 5% are tech stocks.

It’s the other way around for SPY.

Roughly 27% of the stocks it holds are tech stocks. Just 3% are utilities. And only about 7% are in the consumer staples sector.

Dividend-paying utilities and consumer staple stocks won’t do as well when animal spirits are running wild. They’re not where the growth is at.

But they don’t fall as much when times get tough.

But those income streams are fixed… which is why investors often call the bond market the fixed-income market.

That’s why inflation is like kryptonite for bonds. It eats into the buying power of those fixed-income payments.

And when a bond matures, you’re paid the face value of that bond. But that payout doesn’t account for the wealth-eroding effects of inflation along the way.

Dividend-paying stocks are different because the income they pay out isn’t fixed. Companies can – and often do – raise their dividends when inflation rises.

This may be to further incentivize shareholders to stick with the company through tough times. Companies are also less likely to spend their earnings on growth when inflation is high. The uncertainty it brings is too great.

In fact, most investor returns have come from dividend income – not a rise in the share price– in times of high inflation.

Research by investment manager Fidelity shows dividends have made up roughly 40% of the total return of the S&P 500 since 1930.

Here at Legacy Research, we’ve been looking for someone who can help us bring best-in-class income investing ideas and strategies to our readers.

That’s how we met Brad.

He’s an income investor with over three decades of investing experience – and a whole lot of lessons learned – under his belt.

And he teaches at NYU and guest lectures at Cornell, Penn State, and Georgetown.

But it wasn’t his stellar CV that drew us to Brad. It was his life story.

A real estate developer by trade, Brad ruled a booming empire… until the 2008 crash.

Then he lost almost everything.

To say the following years were rough is an understatement, especially with a family of seven to provide for. But he used that time to build himself back “from the ground up,” as he likes to say.

This time, he made sure to start with a firm foundation – a new mindset that focuses on building multiple streams of income in the stock and real estate markets.

Nobody enjoys the kind of volatility we’ve seen in markets this year.

It can be psychologically draining to go through. Especially if you were riding high in the bull market.

So this week, Brad will take a deeper dive into why now is a great time to build reliable streams of stock market income… and how that’s the key to SWAN (sleep well at night) investing.

He’ll also pass on the lessons he’s learned about investing for income.

And he’ll introduce you to different ways you can do that outside of a dividend fund such as the iShares Select Dividend Fund.