If you think the U.S. is a basket case, you should see what’s happening in Britain…

British government bonds have been selling off as a result.

This has caused their yields to spike… putting their government’s financing under pressure.

And the British economy has another problem… It’s in a recession.

So her first act as prime minister was a multibillion-pound shot of government stimulus.

On Friday, she unveiled a “mini-budget.” It included measures to help British consumers with their energy bills… plus £45 billion ($49 billion) of unfunded tax cuts, mainly for the country’s top earners.

But instead of revving up growth, it triggered the mother of all currency routs.

The British pound crashed to its lowest level ever against the dollar.

And the 30-year British government bond has fallen as much as 24% since Truss’ mini-budget. That’s the worst selloff in history for the supposedly steady British bonds.

The panic got so bad, the British central bank stepped in to buy bonds… calm the market… and stabilize the situation.

But as you’ll see today, the big story isn’t a weak pound. It’s a strong dollar. And it’s kicking off a new generation of currency wars.

The dollar is at a 20-year high versus its rivals…

It tracks the exchange value of the dollar versus a basket of six foreign currencies – the euro, the Japanese yen, the British pound, the Canadian dollar, the Swedish krona, and the Swiss franc. 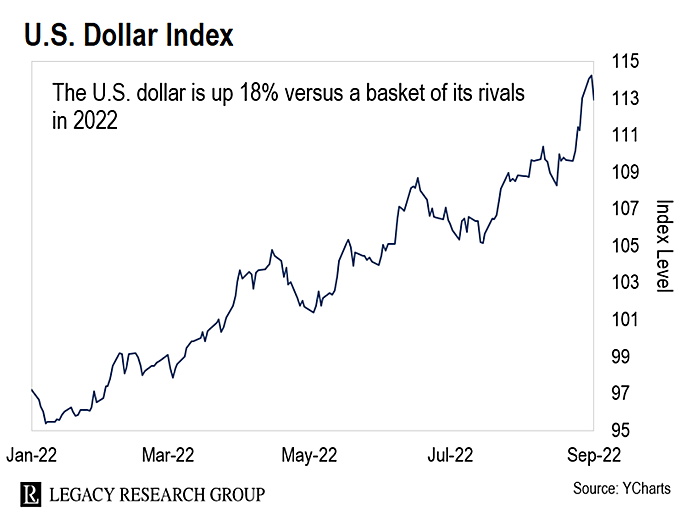 So far this year, the dollar is up 18% versus its rivals. That’s its highest level in two decades.

And although the plunging British pound has grabbed most of the headlines, it’s by no means the only currency to plummet versus the dollar over the past month. 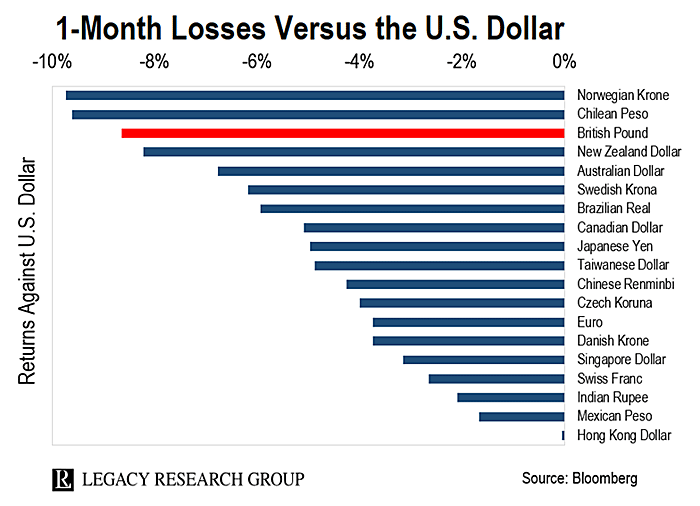 The pound is one of the worst performers. But its slide is almost matched by the New Zealand dollar. And the Chilean peso and Norwegian krone fared even worse versus the dollar this past month.

I know what you may be thinking…

“If inflation in the U.S. is so high, how can you say the U.S. dollar is strong? Haven’t you also been telling us that inflation is eating away at the value of our cash?”

I get the confusion. But both things can be true at the same time. Let me explain…

As an American, each dollar you earn or save buys you less stuff than it did in the past. That’s because inflation is eating away at its buying power.

But inflation isn’t just a problem in the U.S. As I mentioned, in Britain they have 9.8% inflation. In the European Union (EU), it’s closer to 9.1%.

That means the EU and Britain have higher inflation than the U.S. But their interest rates are lower. So there’s less income available for folks who park their cash in euros or pounds.

Plus, the euro and the pound don’t have the same level of haven status as the U.S. dollar.

Altogether, that’s raising the value of the dollar against its rivals. It takes more pounds, euros, and yen to buy a dollar on the foreign exchange market.

And the tech-heavy Nasdaq is down 31%.

But ETFs (exchange-traded funds) that track the value of the dollar versus other currencies have had a banner year.

One of the most popular is the Invesco DB US Dollar Index Bullish Fund (UUP). It tracks moves in the U.S. Dollar Index. And it’s delivered an 18% gain to investors this year.

That’s due to a new generation of currency wars he sees coming.

Imre has been in the markets since 2008. Since then, he’s managed millions of dollars in funds… given lectures to thousands of traders around the world… and worked with some of the most legendary forex traders of all time.

And now he writes regularly over at Jeff Clark’s Market Minute e-letter.

So today, I called him to get his insights into what’s going on. And he gave me his big-picture view of what’s happening in the currency markets right now…

Between 2008 and 2009, currency trading died. That’s because central banks around the world brought interest rates down toward zero at the same time. That killed the volatility in the currency markets because that differential went away.

You had longer-term trends. But most of the day-to-day volatility went away. And that made sense. We want currencies to be stable against one another to facilitate global trade and global integration of supply chains.

But that’s not the world we live in any longer. Back to Imre…

We’re now moving away from globalization. I think this is a long-term shift. Countries see China threatening Taiwan. They see what Russia is doing in Ukraine. So from a geopolitical risk standpoint, they rightly want to be more self-sufficient and bring supply chains home. They also want to be self-sufficient in terms of commodities and energy.

The slide in the pound is only part of it. We’re starting a new generation of currency wars. Over the 14 years since the 2008 global financial crisis, the currency war was a race to the bottom. How can we devalue our currency as efficiently as possible and boost our exports?

Now it’s the opposite. Countries are trying to protect themselves. They’re building these islands. They’re breaking away from the global village.

That means a lot more volatility between currencies… and a lot more opportunities to make outsized gains as a trader in these markets.

Imre is working on a new currency trading advisory…

It will be an opportunity to trade the fall of the pound versus the dollar… and other currency moves… as the currency wars heat up.

And it will be another way you can earn some returns while we wait out the bear markets in crypto and stocks.

I’ll have more news for you on that soon.

Meanwhile, you can catch updates from Imre at the Market Minute trading e-letter.

He’ll break down how currency trading works… highlight some of the big moves he sees happening in the currency markets… and show you how to navigate the currency wars.