Central banks are back in panic mode…

Take a look at the chart below.

It tracks the percentage of central banks slashing interest rates going back to 2000. 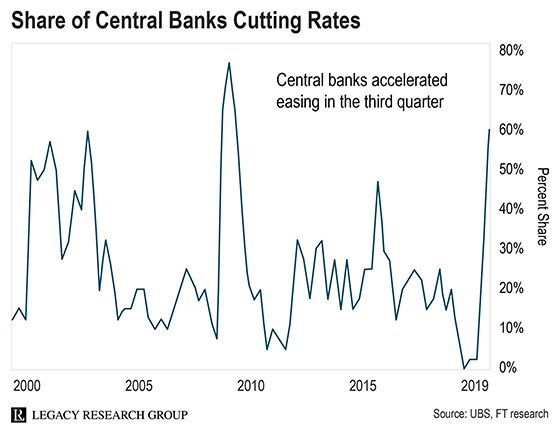 As you can see, almost 6 in 10 central banks around the world are slashing rates right now. That’s up from zero last year. And it’s the highest level since the depths of the global financial crisis.

Today, I (Chris) will show you why that should make you nervous. I’ll also show you how to turn it to your advantage.

A meeting with the Maestro…

Central bankers are experts at sounding like they know what they’re talking about. But in reality, they just blunder from one mistake to the next.

And underneath it all, they know how damaging their policies can be.

I (Chris) know this from firsthand experience.

In January 2017, I sat down with one of the world’s most silver-tongued central bankers, Alan Greenspan, at a closed-door meeting in Baltimore.

Legacy Research cofounder Bill Bonner had invited Greenspan to meet with him, me, and a small group of colleagues at Bill’s office in the Mount Vernon district of Baltimore.

Greenspan is in his 90s. As Bill told me, he was hoping Greenspan… seeing the mess he’d made… would “confess” to having been clueless all along.

If you’re of a certain age, you’ll recall that Greenspan was the first rock-star central banker. The press dubbed him as the “Maestro” because of his supposedly deft handling of the economy over his 19 years at the head of the Fed. (He served as chairman from 1987 to 2006.)

Bill and your editor listening to the Maestro

But Bill never bought the mainstream view. Instead, he blames Greenspan for the easy-money policies that led to the dot-com boom and bust… as well as the subprime mortgage boom and bust.

And one answer Greenspan gave me sticks in my mind to this day.

The question I put to Greenspan: “Isn’t it true that no civilization has survived fiat (government-issued) currency?”

His reply: “It is certainly true that, ultimately, fiat currencies have always ruined the economies that worked with them. That has never happened in a system in which gold was the medium of exchange.”

Here’s the most influential central banker of our time. He’s a guy who spent nearly two decades at the helm of the world’s most prolific fiat-money creation machine.

And he reckons that, over the long run, fiat money “ruins” economies that use it.

This won’t come as a surprise to Daily Cut regulars…

For instance, as we’ve been showing you, ultra-low interest rates evaporate income on your savings.

As Bill points out, they also twist and distort the economy… leading to widespread misallocation of capital… bubbles… manias… and crashes.

Ultimately, they risk destroying faith in the currencies they manage.

That’s why you should be worried that nearly two-thirds of the world’s central banks are slashing rates now… when the economy is supposed to be booming.

When the next recession… or stock market crash hits… who knows what they’ll resort to.

This is all bad news if you have most of your savings in dollars… euros… or yen.

But it’s great news for gold…

That’s bad news if you’re nearing retirement… or are already retired… and are looking for low-risk income streams.

But it’s a boon for gold. That’s because investors are piling into the yellow metal as an alternative to all this negative-yielding debt.

This next chart tracks that relationship. 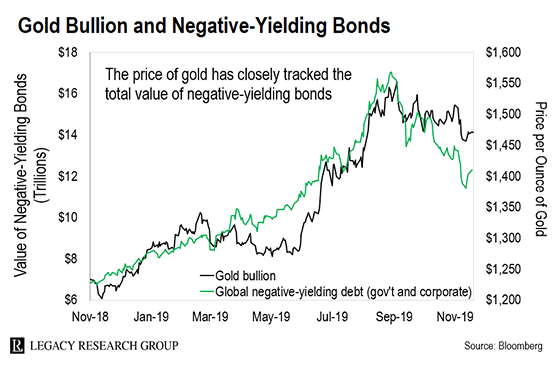 As you can see, the value of gold has closely tracked the value of negative-yielding bonds (government and corporate) over the past 12 months.

Now, as you can see, both the price of gold… and the value of negative-yielding bonds… have dropped over the past couple of months.

Don’t expect that to last long.

And there’s a simple reason for that.

Gold is the antidote to the phony money central bankers manage…

It’s something our other cofounder, Doug Casey, made clear to readers of our Casey Daily Dispatch e-letter…

It’s an unfortunate historical anomaly that people think about the paper in their wallets as money. The dollar is, technically, a currency. A currency is a government substitute for money. But gold is money.

Why is gold good money? Because unlike the money governments pump out, it has inherent value. Doug again…

A good money is something many people want or can use. This is critical to money functioning as a means of exchange; even if I’m not a jeweler, I know that someone, somewhere wants gold and will take it in exchange for something else of value to me. This is why we don’t – or shouldn’t – use things like scraps of paper for money, no matter how impressive the inscriptions upon them might be.

That’s why we’ve been urging you to add some gold to your portfolio.

Your first step is to buy some physical gold…

If you’re new to gold, start with common one-ounce coins.

Our gold industry insider, E.B. Tucker, has created this page as a starting point for his paid-up subscribers who are new to physical gold.

And he’s kindly agreed to share it with Daily Cut readers. (We do not get any compensation from Gainesville Coins for bringing you this offer.)

Next, you can move on to a few bars. For more on how to buy and store them, check out the special report from our colleagues at Casey Research here.

And tomorrow, I’ll show you why E.B. is predicting a 30% gain in gold from today’s levels.