Your ticket to triple-digit gains…

Over the past couple of dispatches, I’ve shown you how Jeff Brown helped his readers profit from the most explosive trends in tech.

We looked at why his top picks in the semiconductor and genetic-editing sectors are up 266% and 315%.

Today, we’re back at it. But this time, we’re doing something a little different…

I sat down with Jeff to talk about why it’s so important to have some exposure to tech stocks in your portfolio. It’s all got to do with the stage of growth we’re at in tech.

Chris Lowe: We’ve looked at specific tech trends that are making investors rich. Today, I want to focus on the big picture. What’s so special about tech stocks? What makes them fundamentally different from investing in, say, utility companies… or consumer staples… or retail stocks?

Jeff Brown: In a word, innovation. Over the next decade, advances in technology will bring profound changes to our lives. They’ll dwarf the progress we’ve seen since the start of the tech revolution that began in the late 1990s.

Everything will change… The ways in which we work, shop, sleep, eat, travel, bank, communicate, entertain ourselves, conduct warfare, manufacture, design, distribute, create, transact, and maintain our own health will all be different.

We’ve seen radical changes in technology over the last two decades – the internet, smartphones, streaming video. But these improvements were only incremental. They’re just the foundation for technology-based changes that will be exponential.

Chris: You hear the word “exponential” used a lot. What does it mean exactly?

Jeff: Simply put, exponential growth is a pattern of growth that shows greater increases with passing time. If you look at a chart of exponential growth, it stays nearly flat for a time. Then, suddenly, it goes almost vertical.

That’s the problem with spotting exponential growth. In its early stages, it looks the same as linear growth. It’s all in a chart I like to show my readers… 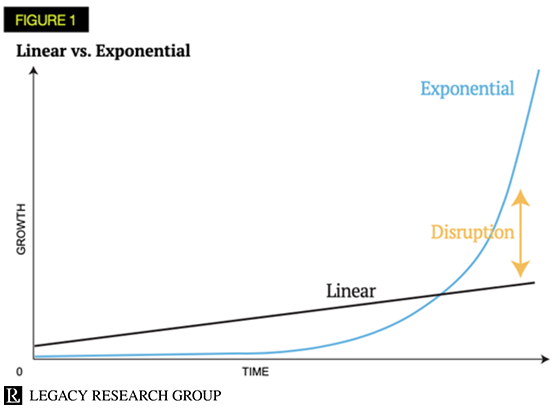 As you can see, exponential growth (blue line) goes along slowly at first. It’s not much different from linear growth (black line). But with exponential growth, we reach a tipping point – the sharp “elbow” you see on the chart – and it takes off like a rocket.

The classic example is Moore’s Law. It states that we can expect the speed and capability of microprocessors – and therefore our computers – to roughly double every two years.

Microprocessors – or “chips” – have been around since 1971. That’s a lot of doubling. We’re up to the stage where a microprocessor can function at the speed of the human brain in terms of calculations per second.

So, if you’d have asked me 20 years ago about the potential of tech stocks, I wasn’t this excited. And the reason was we were too early on the exponential growth curve. But over the course of the last five years or so, we’ve hit that “elbow.”

As an investor, you want to be in position just before the elbow.

Chris: How does this translate into investing profits?

Jeff: Over the last few decades, it took, on average, about 20 years for the typical Fortune 500 company to reach a market value of $1 billion.

But in 1998, Google was able to reach $1 billion in market value in just eight years. People considered this fast at the time. But that was just the start.

By 2004, Facebook had done it in five years. By 2009, Uber had done it in less than three years. In 2012, virtual-reality firm Oculus did it in just over a year. And in 2014, a workplace productivity company called Slack pulled it off in eight months. 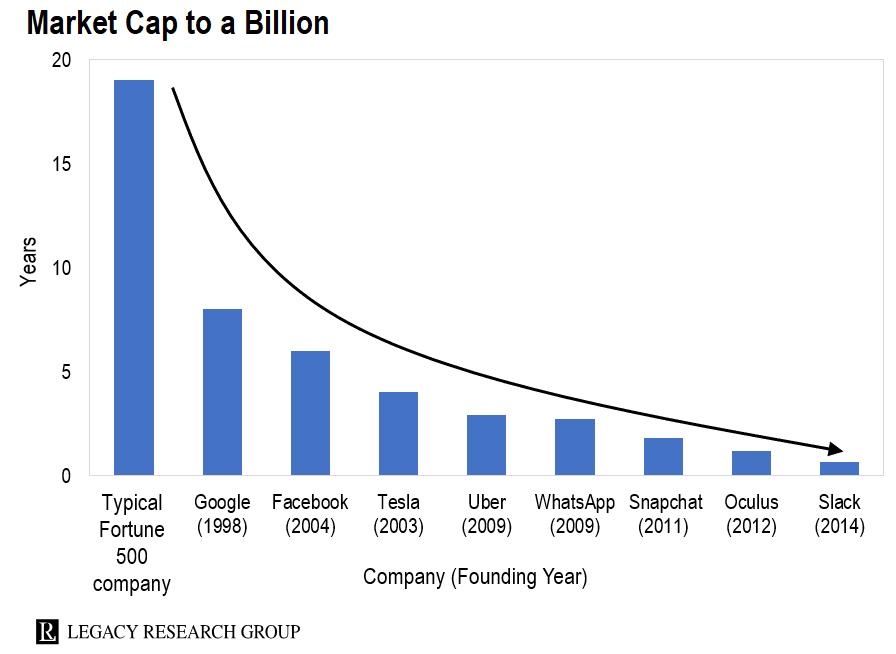 As you can see in the chart above, this trend is speeding up. And investors are reaping the rewards.

I know you’re not a fan of Facebook’s for-profit surveillance model here at The Daily Cut. I’m not either. As I’ve told my readers, I dislike Facebook’s business practices on a personal level. But I can’t deny Facebook is an incredible company and investment. And folks who bought Facebook shares when it went public have made 420% on their investment.

And they’re the laggards.

Chris: I guess the $64,000 question is whether this rapid pace of growth will continue?

Jeff: This is a trend that’s only going to accelerate as tech fills ever-larger parts of our lives.

A good example is Amazon. Last November, my Near Future Report readers had the chance to lock in 30% gains in less than a year on Amazon. It’s one of the largest publicly traded companies in the world. But it rose roughly three times the long-term average annualized returns of the S&P 500.

Chris: How is that possible? Amazon had a market value of $550 billion when you first recommended it to my readers. That’s larger than JPMorgan Chase, Johnson & Johnson, Visa, or Walmart. Amazon was already so massive, you’d think its share price couldn’t possibly gain that much in percentage terms over such a short time.

Jeff: We all know the company as an online bookstore and retailer. But after it purchased Whole Foods in August 2017, it’s now also a grocery store. Amazon now offers fresh, organic produce in addition to books, electronics, apparel, tools, and the hundreds of other product lines it has on its platform.

The company also has one of the largest logistics networks in the world. As I’ve been telling my readers, Amazon is in a position to replace FedEx, UPS, and DHL. It’s happening already. When third parties sell their products on Amazon, their orders arrive at their customers’ homes by way of Amazon’s logistics network.

And in many American cities – as well as in many international markets – an Amazon-owned van makes the delivery. And an Amazon employee is driving the van.

Chris:  Do you have a specific allocation to tech stocks in mind? I know that, ultimately, it depends on readers’ personal preferences and circumstances. But is there a rule of thumb they can follow?

Jeff: You’re right. It’s a personal choice. And it’s something your readers will want to discuss with their financial advisors. For me, the answer is almost 100%. I see no other sector with as much explosive growth potential as the tech sector.

That’s why I’ve been shifting all of my investments into the tech sector. I’m slowly selling off my investment properties and putting the funds into tech. I would much rather have my wealth in the kind of blue-chip tech stocks I recommend to my Near Future Report readers than in real estate, for example… where I have some of my own money tied up.

Chris: Why is that?

Jeff: A good yield on a real estate investment might be 7%. A really good yield might be 12%. But that’s in a good year… when you’ve got full occupancy… and you don’t have a big repair bill. But you have bad years, too. You get a lot of expenses that really eat into your rental yield. Or a tenant walks out and leaves you in the lurch.

As a real estate investor, you’ve got some upside in terms of capital gains, assuming you’re in a good area and the value of the property increases over time. But outside of a real estate bubble like we saw in the run-up to the 2008 crash, those types of gains are insignificant compared to investing in a tech company that’s leveraging exponential growth.

And remember, the best technology firms, like the ones I recommend, aren’t “business as usual.” They’re not companies that are simply improving on an existing product that’s been around for decades.

These companies are paradigm-shifters. In many ways, they are literally powering the future. You won’t find that potential anywhere outside of tech.

That’s where I’d want to stake my claim.

P.S. Yesterday, we showed you how Jeff’s Exponential Tech Investor subscribers were up 303% on CRISPR Therapeutics (CRSP). It’s a leading genome-editing company Jeff recommended in October 2016.

And as you can see from the chart below, the company’s shares jumped another 18% today. 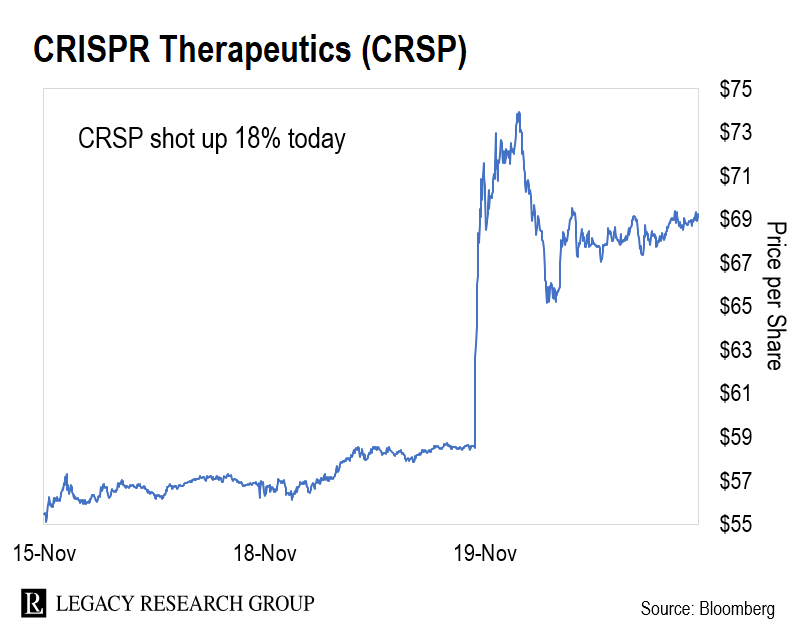 This was due to positive results from the first-ever human trials using CRISPR gene editing.

One patient suffers from beta thalassemia. The other suffers from sickle cell anemia. Both saw marked improvements after the gene therapy treatment.

That brings the gains for CRISPR Therapeutics since Jeff’s recommendation to 386%.