That works out to one new billionaire every 17 hours.

And it’s no coincidence.

It’s the result of the same phenomenon that’s caused the U.S. stock market to grow six times faster than the real economy since the 2008 financial crisis.

This phenomenon is also behind rising inflation… and the bubbles in parts of the stock, crypto, and housing markets.

It’s even behind the widening gulf between the ultra-rich and regular Americans.

As I (Chris Lowe) will show you today, Nomi’s insights into the distortions all this stimulus creates could mean the difference between achieving financial freedom in the near future… and having to spend years longer in the rat race before you can retire.

You see, lots of people believe these distortions are temporary…

So they’ve bowed out of investing… and are sitting in cash… until things get “back to normal.”

You may be one of them…

But as Nomi has been showing in her books, media appearances, and speeches, there’s no going back to normal.

Conjured money… and the distortions it’s creating… are here to stay.

So if you sit out on the sidelines in cash, you’ll jeopardize your retirement.

Some of the worst damage of so much stimulus is an annual inflation rate of 7% – which we’re closing in on now. That rate cuts the buying power of your cash savings in half after 10 years.

That’s why Nomi has identified five sectors set to thrive in the turbulence ahead.

I’ll break down each of them for you tomorrow. But first, it’s important you learn more about Nomi… and why she’s worth listening to.

Nomi is the newest superstar on the Legacy team…

If you’ve been with us for some time, you’ll already know our tech genius, Jeff Brown… our globetrotting speculator and natural resource investing expert, Dave Forest… and our crypto investing expert, Teeka Tiwari.

They’ve been knocking it out of the park with their recommendations for their paid-up subscribers.

Those are the kinds of wins most hedge fund managers only dream of.

But here at Legacy, we haven’t been resting on our laurels. We’ve been hunting for someone to help further level the playing field between you and Wall Street.

Someone who knows the strategies and dirty tricks Wall Street elites use to rig the game in its favor.

And it’s hard to imagine a better fit than Nomi.

She worked at the upper echelons of Wall Street…

As a child, she was a math whiz.

And when she was 19, she got her start on Wall Street as a computer programmer for Chase Manhattan Bank.

She went onto run the international analytics group as a senior managing director at Bear Stearns in London.

She also worked as a strategist at Lehman Brothers. And she was a managing director at Goldman Sachs (GS).

But after the 9/11 attacks, she left her career as a global investment banker and set out to demystify money for regular investors.

And she’s become a leading authority on the distortions central bank stimulus causes… and how they affect our lives.

That’s why we’re thrilled to have Nomi on board. Alongside Jeff, Dave, and Teeka, she’ll help you not only protect… but also grow… your wealth over the years ahead.

Here’s a chart Nomi showed readers of her new e-letter, Inside Wall Street With Nomi Prins.

It’s of global central banks’ balance sheets. It’s a good proxy for how much stimulus they’ve conjured up. Take a look… 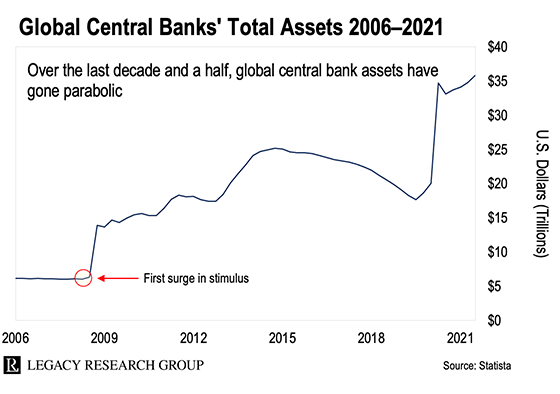 You can see the first surge in stimulus (red circle) on the chart around 2008. That’s when central bankers fired up trillion-dollar stimulus programs.

But as massive as that surge was… it’s just a blip on the chart compared with the levels of central bank stimulus today.

At the height of the coronavirus meltdown in March 2020, the Fed (America’s central bank) was creating $1 million a second and using it to buy financial assets.

That’s about $90 billion a day… or more than the Fed was creating in a month at the tail end of the 2008 global financial crisis.

Here’s how Nomi put it over at Inside Wall Street…

Since the financial crisis of 2008… and through the COVID-19 pandemic… the planet’s largest and most powerful central banks have fabricated trillions of dollars.

This money, like a virus, has multiplied itself many times over as it flowed from central banks… to commercial banks… to hedge funds… and into financial assets such as stocks, bonds, and crypto.

And as crazy as it all may seem, it’s not stopping anytime soon. Back to Nomi…

Can this situation change? The short answer is no. I used to think that, at some point, central banks would fail to deliver the bounty of money the markets craved.

I believed that would cause a crash from which there would be no escaping. The market and the economy would suffer epic casualties.

But I don’t believe this anymore.

No laws or regulations limit the size of central banks’ balance sheets. The behavior of central banks during the pandemic revealed to me, Wall Street, and investors that there will always be a conjured money cushion from which markets can spring back higher.

The good news is we can take advantage of this new reality by focusing on the five sectors Nomi says will thrive in this environment.

Details of those in tomorrow’s dispatch…