The drop came after the minutes from the Fed’s mid-December meeting hit the newswires.

They also said they were considering shrinking the central bank’s $9 trillion balance sheet faster than expected.

That’s the biggest one-day fall for the Nasdaq since last February.

As usual when stocks fall on Fed tightening talk, folks in the mainstream press ran around with their hair on fire.

My advice to you is ignore them.

As we looked at yesterday, we’re living through an age of unprecedented central bank stimulus.

And as Nomi Prins, the newest member of the Legacy Research team, has been spreading the word on, nothing Fed boss Jay Powell or his fellow Fed officials say changes that.

So I (Chris Lowe) recommend you turn off the mainstream news… and focus on five sectors Nomi says will benefit most from the trillions of dollars of stimulus central bank officials are pumping into the markets.

Powell has changed course on rate hikes before…

And he promised to raise rates and tighten credit conditions.

At first, he made good on his word. He raised interest rates four times that year (red circles on the chart below).

Then the bottom fell out of the stock market. And he had a sudden change of heart…

Then at a press conference on January 30, 2019, he said the Fed would be “patient” about raising rates any higher. 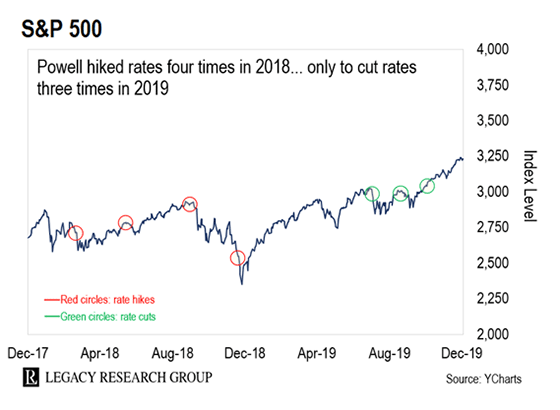 It’s what the press dubbed the “Powell Pivot.” Or my favorite, “Powell’s pirouette.”

Since he pivoted before, there’s no reason to think he’ll stand his ground this time if stocks keep heading south.

And remember, the Fed isn’t the only central bank pumping out stimulus…

It’s a point Nomi made yesterday at her new e-letter, Inside Wall Street With Nomi Prins.

The European Central Bank (ECB), the Bank of Japan, and dozens of other powerful global central banks are also in the stimulus game.

Even if Powell had the guts to raise interest rates into a stock market sell-off in an election year, it won’t end the stimulus era.

Just as they did when the Fed turned hawkish in 2014… and started to tighten credit conditions… the ECB and Bank of Japan made it clear to investors that they would extend their ultra-dovish monetary policies.

It doesn’t make sense to isolate what the Fed does. No matter what Powell said, or says in the coming months, the average interest rate on offer to the international financial community will hover at about 0% for the foreseeable future.

In short, abundant liquidity won’t be a problem.

Don’t worry if some of this is new to you…

We’ve brought Nomi on board to help you chart a course through today’s stimulus-addled markets… and position yourself to profit.

She’s a former investment banker who quit a seven-figure job at Goldman Sachs (GS) to blow the whistle on Wall Street’s dirty tactics.

And it’s not just Wall Street she has her sights on. She’s become an authority on the distortions central bank stimulus causes… and how they affect our lives.

She’s spoken at the Fed, the International Monetary Fund (IMF), and the World Bank on how to get banks to better serve the economy.

And she’s written two books exposing the influence central bankers have over our lives – All the President’s Bankers and Collusion: How Central Bankers Rigged the World.

Nomi with her 2018 book, Collusion

The scale of their influence is hard to fathom. Since the 2008 financial crisis, the Fed, the ECB, and the Bank of Japan… along with China’s central bank… have conjured up roughly $31 trillion.

About one-third of that stimulus – $11 trillion – has hit global financial markets since the start of the pandemic.

But remember, it’s not all doom and gloom…

Sure, so much stimulus causes massive distortions across markets and the economy.

Inflation is at its highest level in 40 years… and there’s bubble-like behavior in parts of the stock, crypto, and housing markets.

Meanwhile, the government is going on a spending spree, knowing the Fed is buying its bonds with infinite firepower… and keeping interest rates low. And venture capitalists (VCs) and private equity investors have nearly limitless access to cheap cash.

But as Nomi will show her readers, five sectors are set to benefit most from all this conjured money in 2022. By focusing on these sectors, you can profit as the stimulus continues to gush.

4. The metaverse and AI

Conjured money has been pouring into developing clean and sustainable energy sources.

And the infrastructure bill President Biden signed into law in November earmarks $65 billion to upgrade the grid so it can carry more renewable energy.

It also sets aside $7.5 billion for building out America’s charging network for electric vehicles (EVs).

Nomi says this – along with billions more in spending by governments around the world – will create massive opportunities to profit in the sustainable energy and green tech sectors.

That’s why Nomi will also be focusing on engineering and construction companies set to benefit from all that spending.

The infrastructure bill sets aside a further $65 billion to extend broadband access to the entire nation.

Nomi is also focused on investment in space companies.

As she points out, a new record of $10.3 billion is about to flow into space travel companies this year.

And investment bank Morgan Stanley (MS) says the global space industry could generate revenue of more than $1 trillion in 2040.

Sector No. 4 – The Metaverse and AI

As I’ve been showing you, the metaverse is the next evolution of the internet.

Instead of just looking at web pages on a screen, you’ll step inside 3D virtual worlds as an avatar (digital representation of yourself) to work, shop, hang out with friends… and even set up your own virtual business.

Think of it as a massive-scale network of real-time 3D worlds that are all connected.

Metaverse-related companies raised more than $10 billion in VC funding last year. And they’re a top target for funding heading into 2022.

AI (artificial intelligence) will also be a focus for Nomi. As she put it…

AI is already being used across a range of industries, including finance, media, healthcare, agriculture, legal, retail, oil-and-gas exploration, and manufacturing. And the number of companies developing AI is staggering. These range from startups to titans.

Some top players are among the biggest names in tech. These include Amazon (AMZN), Apple (AAPL), Facebook/Meta (FB), Google (GOOG), IBM (IBM), Intel (INTC), Microsoft (MSFT), and Nvidia (NVDA). Consulting firm McKinsey & Company estimates that AI will add at least $13 trillion to the global economy by 2030. So this is set to be another huge opportunity.

This sector covers traditional financial tech companies as well as crypto- and blockchain-based ones. Here’s Nomi with more…

We’ve already seen huge flows of capital into the crypto sector. And Nomi expects even more to flow into the sector in 2022.

I’ll have more from Nomi on each of these sectors in tomorrow’s dispatch. So keep an eye out for that.