The most important question for every gold investor… A simple way to “turbo charge” your returns in the coming gold bull market… In the mailbag: “Do we need a nanny state to ban stock buybacks?”…

That was the message in yesterday’s Daily Cut from gold industry insider E.B. Tucker.

In short, E.B. says a new bull market in gold began last summer… and that gold is headed back toward $1,500 an ounce before the end of 2019.

But in today’s dispatch, we’ll show you how you can magnify gold’s gains by adding gold mining stocks to your portfolio.

If history is judge, this one simple move can potentially 25x the returns of the physical metal.

Before you buy your first gold stock, you want to own some physical gold – whether that’s in the form of bullion or gold coins.

Here’s how E.B. explained it during a conversation I (Chris) had with him for tomorrow’s issue of our Legacy Inner Circle advisory all about gold investing…

I comanaged a gold fund before I came to work at Legacy. We had high-net-worth clients who wanted to own gold stocks. And they wanted us to manage these gold stock holdings for them.

The first thing we always did in our first meeting with new clients was ask them a simple question: “How much physical gold do you own?” If the answer was none, we said, “You can’t buy a gold stock until you own physical gold – period.”

That’s because physical gold and gold stocks serve different aims in your portfolio.

It also protects your savings from government wealth grabs such as negative interest rates on bank accounts… or inflations (even hyperinflations) in government-issued fiat currency. E.B. again…

It’s like when people say, “Before you go on vacation, you’ve got to have your emergency fund topped up. Because if you get fired on vacation, and you come home and you’ve got no money, you’re really in trouble.”

You need to own physical gold before you buy gold stocks, because that’s your stability. That’s your insurance policy.

It’s why E.B. says physical gold should be a cornerstone asset in your portfolio. It’s something you hold onto over the long run.

Gold mining stocks, on the other hand, are shorter-term speculations…

As we mentioned above, gold stocks deliver “turbo charged” versions of the returns on the physical metal. 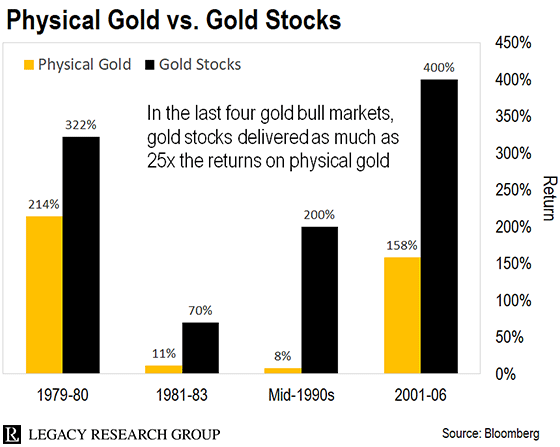 As you can see, physical gold more than tripled in price during the 1979-80 bull market… racking up a 214% gain. But the average return for the leading gold stocks was 322%.

It was a similar story in the 1981-83 bull run in the gold market. Physical gold rose by 11%. But the average return for the leading gold mining stocks was 70%.

And during the gold boom in the mid-1990s, the gap was even wider. Gold rose 8%, while the average gain for the leading gold miners was 200%. That’s 25 times higher returns from gold stocks than from physical gold.

This isn’t just some accident of history. It’s a direct result of the way the gold mining business works.

Gold miners are “leveraged” to the price of gold…

When you think of adding leverage to a portfolio… you typically think of using borrowed money to amplify your returns.

But that’s not what’s going on with the gold miners. It’s got nothing to do with borrowed capital.

Instead, a rising gold price has an exponential effect on the profitability of gold miners. And this translates into explosive gains for shareholders. Here’s E.B. with more…

When the price of gold goes up, say, $100, the profitability of a gold mining company goes exponentially higher. All its labor costs… its processing costs… its smelting costs… and its transportation costs are locked in over the short term.

The extra $100 flows straight to the gross profit of the company. The mining company is doing the same work – at the same cost – to extract the ore. But it’s selling it on for $100 more.

Here’s an example from E.B. of how that works…

Now, let’s say you own shares in a mining company that owns 1 million ounces of gold in the ground. And say it costs the company $1,250 per ounce to mine that gold. At a gold price of $1,300, that company is turning a profit of $50 on each ounce of gold.

It’s why small increases in the gold price can cause a gold stock to soar many times that amount. And it’s why gold stocks are a great way to add some speculative oomph to your gains on physical gold.

These are the gold stocks he believes are most likely to benefit from the bull market in gold he sees coming.

But if you’re not a paid-up Strategic Investor subscriber, E.B. recommends you buy shares in the VanEck Vectors Gold Miners ETF (GDX).

It holds shares in 46 of the most well-established and widely traded stocks involved in the gold mining business. So it’s the easiest alternative to picking individual mining companies.

More important… GDX is a way to get broad exposure to gold stocks – and the leverage they give you to rising gold prices.

Next week, we’ll be talking more to E.B. about some of the lesser-known ways to profit from the coming boom in gold… including the closest thing to being “tax collector” in the gold mining sector.

Meantime, don’t forget to save your spot for E.B.’s “Stock Market Escape Summit”…

E.B. says the rise in gold will be accompanied by a spike in stock market volatility… as the bull market in stocks gives way to the next bear market.

It’s why, next Wednesday, February 27, E.B. is teaming up with Legacy Research cofounder Doug Casey for a special broadcast.

For the first time, he’s going public with a strategy he and Doug have been using for years to profit when stocks hit turbulent times.

It’s an overlooked type of investment that can help you make 1,000% gains from big and small companies alike – without touching the stock market. And it has nothing to do with cryptos… options… or even gold.

To make sure you don’t miss it, secure your spot right here.

Finally, in the mailbag: “Do we need a nanny state to ban stock buybacks?”

Last Thursday, we questioned the calls on Capitol Hill to limit stock buybacks as a way to boost wages. And judging by the mailbag responses we’ve been getting, we hit a nerve.

I don’t like it when companies buy back shares. If a company has nowhere else to reinvest, then it should pay dividends. I also think it is downright immoral for a company to borrow money to buy back shares. I also feel that it is NOT governments’ place to regulate this.

I think it would be great if they got rid of stock buybacks. They are used not to reward shareholders, but instead, to reward executives through stock options. For me as an investor, it makes it hard to know if the earnings per share are genuine, or if they’ve been juiced by stock buybacks, or if the company should be avoided.

Invariably most buybacks take place when the stock is already trading at expensive valuations, meaning that I, as an investor in such a company, am covertly being made a larger-percentage stakeholder in a company that already has too high a valuation. All this so that company executives can cash out their stock options.

So, we’re going to ban stock buybacks? So, when a corporation thinks its stock is undervalued, it can’t buy any of it back? And when a mature corporation spins off more cash than it has use for in funding good projects, it must find marginal internal projects to invest in, rather than buying back stock and returning the cash to investors, who can then allocate it to other stocks with more promising projects available to them?

All these restrictions on a legitimate method of returning profits to a corporation’s investors, just to stymie managements that would buy back stock when it is overpriced, or buy back stock just to goose its own compensation packages?

Who would invest in a company run by such managers in the first place? Do we really need a nanny state to impose a blanket ban on stock buybacks because we don’t bother to investigate the backgrounds and character of the people hired to run the companies we invest in? Or is there some other agenda behind the proposal to ban buybacks?

I like investing in companies with smart, honest managements. And I like giving them a means, besides dividends, of returning profits to investors.

Are stocks buybacks a great way for companies to return value to shareholders, as Scott G. says? Or are they immoral as Mike A. believes? Have your say at [email protected].