The IMF issues a rare bearish alert… Why up can mean down for stocks… Proof gold is your best friend in a market collapse… In the mailbag: “As a species, we have an amazing ability to make stupid decisions”…

Global growth is hitting the skids…

That’s according to the number crunchers at the International Monetary Fund (IMF).

In their latest report, out yesterday, they said the global economy would grow just 3.5% in 2019.

This comes hot on the heels of news that China – the supposed “growth engine” of the global economy – had its slowest annual growth rate in 28 years.

Stocks in Asia, Europe, and the U.S. are a sea of red today following the news.

From September through December last year, the S&P 500 plunged 19.8% peak to trough – just shy of the 20% plunge needed for official bear market territory.

But since the low on Christmas Eve, the index is up 14%… A sign that the buy-the-dip mentality is alive and well.

But the IMF warns that buying the dip was a risky move. From its report…

A range of catalyzing events in key systemic economies could spark a broader deterioration in investor sentiment and a sudden, sharp repricing of assets amid elevated debt burdens. Global growth would likely fall short of the baseline projection if any such events were to materialize and trigger a generalized risk-off episode.

Translation: Anything from a botched Brexit… to an escalation in the U.S.-China trade war… to a shooting war could cause stocks to crash. If that happens, global growth could grind to a halt.

We’d be silly to ignore this warning…

It’s tough to find a more bullish organization than the IMF.

The wonks at IMF headquarters in Washington, D.C. almost always have an upbeat outlook for the global economy and markets.

And that shouldn’t surprise.

Its mandate – under the Bretton Woods Agreement that followed World War II – is to keep the global economy motoring along. So it tends to never want to deliver bad news for fear of sending markets… and economies… lower.

Going back to 1991, there’s been an average of 26 recessions around the world. The IMF has forecast, on average, just five recessions a year.

One of the biggest bloopers was the forecast the IMF put out in October 2008 – one month after Lehman Brothers collapsed.

Unfazed by the bankruptcy of one of America’s top investment banks… and a wildfire of subprime defaults, threatening a chain reaction of defaults across the world’s biggest financial institutions… the IMF predicted an economic expansion for 2009.

So when a perma-bull organization such as the IMF warns that the economy is slowing… and that it will struggle to withstand the shock of a stock market crash… it’s another strong signal that the 10-year bull market on Wall Street is on shaky ground.

For instance, in December, we suggested that you take some profits on your stocks and raise your cash levels. And we showed you why it makes sense to own gold (more on that in a moment).

Skeptical readers may point to the bounce in stocks earlier this month as proof that we’re overly concerned… and that the coast is clear for a while longer.

But whipsawing markets are not healthy markets.

The average bear market drop for stocks is 35%. But the pain isn’t clumped together. It’s spread out over an average of 15 months.

That was the message from master trader Jeff Clark at the start of the year. As he warned in the January 2 Daily Cut…

Wild swings are typical bear market behavior. Stocks take a big plunge. Then you get these powerful rallies that whip everybody who dared “go short” – that is, bet on stocks falling – for too long.

That’s why we’ve been urging you to own gold…

But they’re in lockstep when it comes to the importance of having “disaster insurance” in your portfolio.

And that means owning gold.

Our globetrotting geologist Dave Forest did a deep dive on gold for readers of our elite commodities advisory, International Speculator.

He looked at how gold holds up in a crisis. And what he found proved what we all know to be true…

He then took the metals that have comprehensive historical data available – gold, silver, platinum, palladium, and copper – along with other, rarer metals which he shared only with his paid-up readers. And he compared their performances during the three “acts” of each crisis. 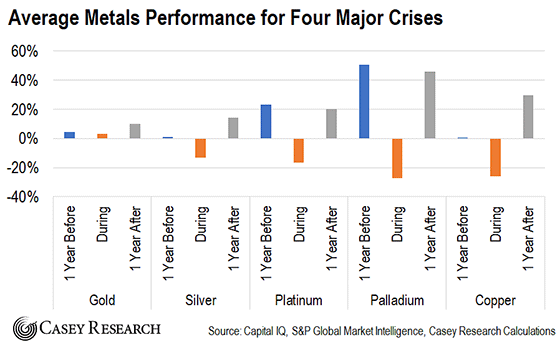 As you can see, only one of the five metals rose, on average, during those crises… gold. Here’s Dave with more…

Gold is the way to go during uncertain times. That makes it a great asset to own if you want a no-worries financial crisis. During the last four major financial crashes, it gained an average 3%.

That may not sound like a lot. But remember, in a financial crisis, most of your stock portfolio is going to be taking on water. Your real estate portfolio may also be in trouble. So even an asset that stayed flat would be an advantage.

Gold also delivered gains before [blue bar on the chart] and after [grey bar] the crashes. It rose an average 4% in the year prior to a crash and 10% in the year after.

The other four metals Dave looked at – silver, platinum, palladium, and copper – outperformed gold after the crisis had passed. But only gold was a reliable safe haven while the financial storms were still blowing.

If you haven’t already bought gold, now is a great time… before we enter a new crisis phase.

You can find out how to get started as a gold investor in The Gold Book.

It’s 48 pages filled with everything you need to know – including a four-step checklist for buying the right coins… flexible storage options… and what to look for in a gold stock.

In the mailbag: “As a species, we have an amazing ability to make stupid decisions”…

Last Thursday, as part of the pot legalization debate that’s been raging in the mailbag, reader Karen W. said…

I find it very interesting that people are so passionate about telling other people what to do “for their own good.” People should be able to decide what to put in their own bodies. Of course, with freedom comes responsibility – people would have to be held accountable for their actions if they were given the freedom to choose.

I have been following this debate and occasionally weighing in. But I thought Karen W.’s point today was particularly worthy of emphasis. In the United States today, we are at a curious juncture of rights and responsibilities – we are vastly expanding the definition of rights and simultaneously contracting the idea of personal responsibility.

I once had an employee who steadfastly refused to wear his seatbelt in the ambulance. His reasoning was that in the event of an accident, he would either walk away uninjured or he would be killed outright… and what he feared most was being disabled. His thesis was not supported by the statistics, but he wasn’t subject to reason.

So, I just told him I would support his decision to not wear a seatbelt if he could guarantee me that neither the company nor society would be held responsible for any costs related to his disability or death.

While in general I agree that individuals should be free to harm themselves in whatever way they wish just as long as they do not harm others, I must disagree with Karen W., who said “It should be up to me to decide what is appropriate for me and for my family, not up to the government or anyone else who believes that they know better than me.”

Unfortunately, there are visible and repeating cases where “the government or anyone else” is morally enjoined to protect the children of those who chose to injure themselves. It has been long recognized that whether it is “the government” or the rest of us, i.e., “anyone else,” there is a collective responsibility to protect children who are being harmed by parental behavior.

There is a limit to parental authority over the family. Despite the “nanny state,” to assert otherwise, in such cases, is to elevate principle over rational practice. We have had quite enough of that. Complex issues do not readily lend themselves to simplistic flag-waving declarations.

Do you agree with Karen W. that people should be able to decide what they put in their own bodies? Or is that just ignoring the wider costs to society? Write us at [email protected].