The “Crypto Winter” is ending… Bitcoin buyers step back in… You should, too… In the mailbag: “You get what you deserve when you act in a lawless fashion”…

It’s been a brutal 14 months for bitcoin investors…

That was 1,991% higher than where it had started the year.

But as you can see from the chart below, it’s been downhill ever since. 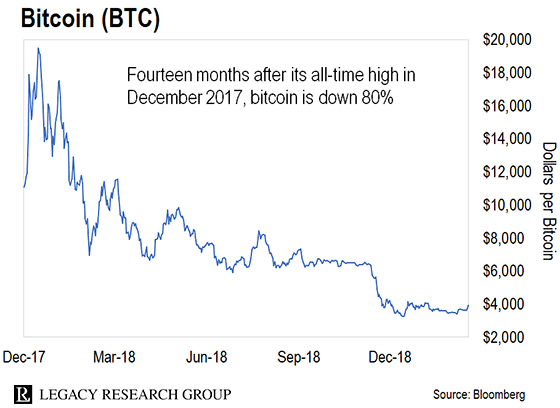 It’s what folks have been calling the “Crypto Winter” – a long and difficult time of falling cryptoasset prices.

But as you’ll learn in today’s dispatch, we’ve picked up on two bullish signals that the Crypto Winter is coming to an end.

That means now is a great time to be a bitcoin buyer.

Take a look at the following chart. It tracks the dollar price of bitcoin going back 12 months.

On Friday, master trader Jeff Clark flagged it for readers of our free Market Minute trading e-letter, under the headline “The Next Big Move for Bitcoin.” 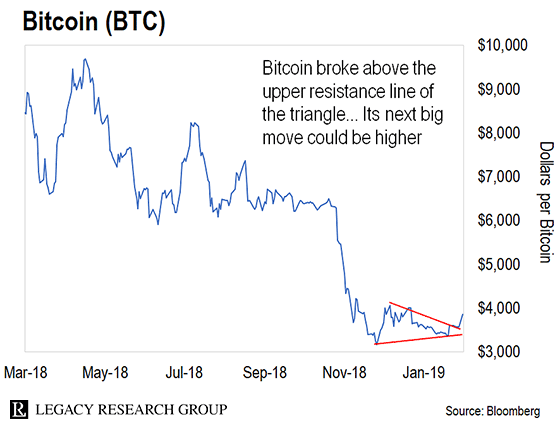 There are two things to note here.

First, for all of last year, bitcoin was trading in a bearish pattern of lower highs and lower lows.

That’s the classic definition of a bearish downtrend.

Second, since its December low, the pattern has morphed into what Jeff calls a “consolidating triangle.” Here he is with more…

This pattern is created when the price of a particular asset chops back and forth in a tight trading range. It’s called a “consolidating” pattern because it builds energy for the next big move – higher or lower.

The last time bitcoin formed a similar pattern was back in November. Bitcoin chopped back and forth in a tight trading range for a few months. But it eventually broke below the lower support line of the triangle. And we got a big move lower. You can see it on the chart. In mid-November, bitcoin falls off the proverbial cliff.

This time, though, bitcoin has broken above the upper resistance line of the triangle. So this time, the odds favor the next big move for bitcoin to be higher.

Now, there are folks who don’t put a lot of faith in chart analysis.

But Jeff has been trading chart patterns like this for almost 30 years. And it’s allowed him to rack up one of the most impressive track records in our industry.

Since its inception in January 2017, Jeff’s Delta Report trading advisory booked 63 winners out of 76 trades for an 83% win-rate and an average profit of 20%.

And if you include the “scalp trades” Jeff shares in his Delta Direct blog, you’re looking at 121 winners out of 153 trades for a 79% win-rate and an average return of 16%. (You can view Jeff’s full Delta Report track record, including closed trades, right here.)

But even if you’re not a fan of chart analysis… there’s a second signal that higher prices are on the way.

Bitcoin is consolidating even in the face of negative news…

That’s been the core message from world-renowned crypto investing expert Teeka Tiwari to his readers in 2019.

If you don’t know him already, Teeka was the first one in our industry to recognize the money-making potential of cryptos.

He first added cryptos to the model portfolios at our Palm Beach Letter and Palm Beach Confidential advisories in April 2016 – before bitcoin became headline news in the mainstream press.

And it’s made him well-known among crypto developers and entrepreneurs.

I (Chris) have joined Teeka at cryptocurrency and tech events in Berlin, Germany and Lisbon, Portugal. And I lost count of the times his subscribers came up to him and thanked him for his recommendations. At a little seafood restaurant in Lisbon, the waiter even came up and thanked Teeka for his research.

It’s no surprise, considering the returns Teeka has made for his readers. Even after a long and painful Crypto Winter, his top open positions across the two model portfolios are up 6,940%… 1,517%… and 810%.

What we are seeing is some good base-building in bitcoin. That doesn’t mean we can’t flutter back down to $3,200 and revisit last December’s low.

But even in the face of what the market should’ve perceived as very negative news – the pulling of an application for a bitcoin ETF – the market still didn’t budge. It didn’t go down at all. And that’s very encouraging.

Teeka is talking about the application from Cboe Global Markets to launch an exchange-traded fund (ETF).

Cboe Global Markets is one of the world’s largest exchange holding companies. And it’s the owner of the Chicago Board Options Exchange, the biggest options exchange in the U.S.

Last June, Cboe Global Markets applied to the main U.S. stock market regulator, the Securities and Exchange Commission (SEC), to list ETF shares that would track the price of bitcoin.

The SEC was due to rule on the proposal by February 27. But as a result of the recent government shutdown, it was unable to make a ruling. And had the shutdown continued, the SEC would have automatically denied the ETF.

To avoid this outcome, on January 23, Cboe Global Markets withdrew its application.

That was a blow for bitcoin investors. Getting a bitcoin ETF up and running would allow deep-pocketed institutional investors to easily get exposure to bitcoin – bringing fresh money into the crypto market.

Cboe Global Markets has since reapplied for approval for its ETF. But the fact that bitcoin didn’t budge after the withdrawal of its application on January 23 is another sign we’re close to the bottom. Teeka again…

When you’re in a bear market, prices go down on good news and get absolutely hammered on bad news. So when you have bad news come out, and the market stays flat or goes down only a little bit… that’s the sign of a bottoming process. And it’s very, very encouraging.

What’s the key takeaway? Well, it means it’s time to start dipping our toes back into the crypto waters.

Just remember to treat cryptocurrencies as speculations – and that means keeping your position sizes small.

The returns, as Teeka has shown, can be massive. So you don’t need to invest much to make life-changing gains.

To find out how to buy your first bitcoin, check out this guide Teeka and his team put together.

Besides recommending the best exchanges to buy bitcoin, it also shows you the four digital “wallets” Teeka recommends you use to store your bitcoin… and where you can trade it for other cryptos.

Judging by today’s mailbag, our defense of stock buybacks hit a nerve…

In last Thursday’s Daily Cut, we questioned the calls on Capitol Hill – from both Democrats and Republicans – to limit stock buybacks as a way to boost wages.

And it’s prompted some confusion in the mailbag. (Scroll down for more on that.)

We’re not the only ones at Legacy Research – the publishing alliance between Bonner & Partners, Casey Research, Palm Beach Research Group, and Jeff Clark’s Delta Report – writing about it.

As colleague Nick Rokke put it over at our Palm Beach Daily e-letter, if politicians wanted to increase workers’ pay they could just propose jacking up the minimum wage.

Instead, they’re proposing a backdoor scheme to punish profitable companies and prevent them from returning value to shareholders in a tax-efficient manner. (Buybacks, for now, aren’t taxed. Dividends are.)

If this subject gets you hot under the collar, check out Nick’s take on buybacks. And let us know what you think.

Will banning buybacks boost wages, as the folks in Washington say? Or is it another attack on prosperity?

Write us at [email protected]. We read every email you send in. And we regularly feature your comments in our Daily Cut mailbags. Speaking of which…

In the mailbag: “You get what you deserve when you act in a lawless fashion”…

As promised, your fellow readers weigh in on whether the feds should outlaw stock buybacks… and on whether we should stay out of politics here at the Cut…

Your article on buybacks ignores a wealth of current research that shows (i) buybacks are used by insiders as a form of insider trading (as they dump much larger volumes of stock during buyback periods and ahead of bad news) and (ii) buybacks are executed by insiders at horrible prices (i.e., buybacks slow when a company’s stock price is the cheapest by traditional metrics and accelerate when a company’s stock price is at stratospheric valuation levels).

While I am no fan of government regulation, we have long ago lost any semblance of a free market – and insider conduct is genuinely criminal in the area of buybacks. So, you get what you deserve when you act in a lawless fashion.

Until 1982, stock buybacks were illegal. Since I became an owner of stock prior to 1982, I find some of your statements regarding the impact to making stock buybacks illegal “again” lacking, as corporations seemed to operate successfully prior to 1982.

I do realize that stock buybacks tend to increase the stock price which, in many cases, is another executive metric that enhances the variable compensation (aka bonus).

As far as you staying out of the arena of politics, I believe there are at least two reasons why you should continue writing about it. First, there is no doubt that it affects the financial markets, which of course, is germane to your function. Second, you are trying to help your readers prepare for the catastrophic environment that is coming, at least in part due to our dysfunctional government.

On the issue of stock buybacks, I think you left out one important argument against them. I believe that they benefit corporate executives far more than they benefit the ordinary shareholder. Executives, with their stock options and stock grants have far more to gain than the average shareholder, and I believe it makes them short-sighted in their judgment about the best course for the company.

Are buybacks an investor’s best friend, as we claimed in our original essay? Or should the feds ban them altogether? Write us at [email protected].