Last week, I (Chris) took you on a whistle-stop tour of monetary history.

And I showed you how, in 1933, President Franklin D. Roosevelt confiscated American citizens’ gold… and banned them from owning it.

It became legal again for Americans to own gold bars, coins, and certificates only in December 1974.

That’s when President Ford signed a bill into law that reversed this 41-year ban.

This past weekend, gold hit its highest level since it started to trade freely again: $1,976 an ounce. Take a look… 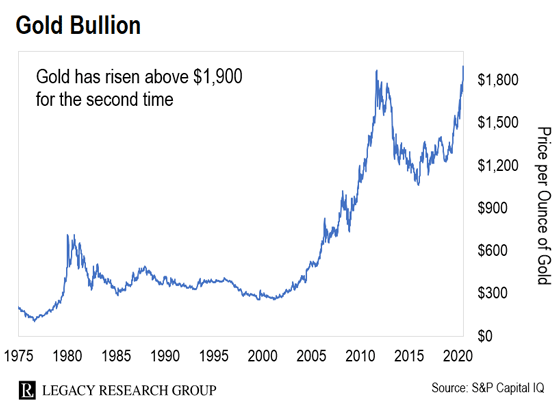 But don’t worry if you’ve ignored the rally thus far.

As you’ll see in today’s dispatch, the bull market is still in its infancy. So it’s not too late for you to make transformative profits from it.

Most folks still don’t have gold on their radars…

They’ve heard about the monster gains in cryptos… tech stocks… and pre-IPO deals.

And gold can seem fuddy-duddy by comparison.

But when gold bull markets get going… they’re some of the market’s most powerful wealth-creating machines.

In the last great bull run for gold, the physical metal rallied 166%. That’s not bad… but it’s not transformative.

Something similar happened in the first great gold bull market in the modern era.

First, a quick word on what we’re all about…

Every week, thousands of new readers seek out The Daily Cut and one of our 17 paid advisories here at Legacy Research as an alternative to the mainstream financial press.

Traditional media outlets such as Bloomberg, CNBC, and The Wall Street Journal are really just advertising platforms. They don’t like to think of themselves this way. But they exist to serve their advertisers… their stockholders… and their sponsors.

But as a subscription-based business, our only loyalty is to you – our reader.

We generally don’t earn a profit from marketing trial subscriptions. Instead, we seek long-term relationships with you and your fellow readers by providing you insightful, actionable, and profitable advice.

If our analysis benefits you, you’ll continue to read and subscribe. If not… you’ll move on.

It’s a business model we’re proud of… because it’s a win-win. For us to be successful, we have to first help you succeed.

Our big call on gold two years ago is a prime example of how we do that.

It was the first recommendation I passed along to you from the Legacy team.

Things had gotten so bad, the Vanguard Group – the world’s largest provider of mutual funds – had just dumped its precious metals mining fund.

Nobody wanted to know about gold… let alone invest in it. And that looked a lot like a classic contrarian buy signal to colleagues Dave Forest and E.B. Tucker.

Take a look at what happened next… 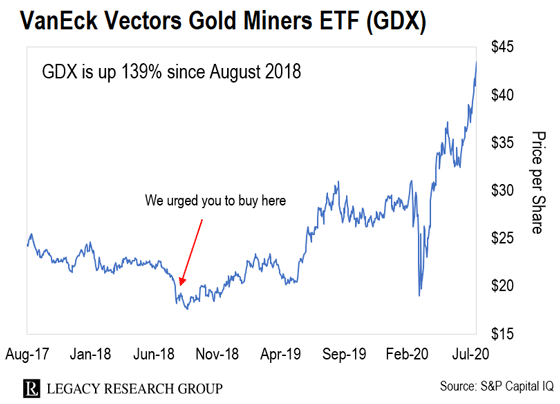 Gold is up 52% since we penned that dispatch. And gold mining stocks, measured by the VanEck Vectors Gold Miners ETF (GDX), are up 139%.

And we hammered home the message again a year later at the 2019 Legacy Investment Summit.

Unfortunately, COVID-19 quashed our plans for this year’s event.

But last September, more than 300 of your fellow readers joined us at the luxury Park Hyatt Aviara resort in Carlsbad, California, to catch our best ideas for the year ahead.

Gold was trading at $1,533 at the time. It wasn’t deeply hated, like it had been when we first wrote about it a year earlier. Still, it wasn’t on the front pages of mainstream newspapers like it is now.

But at Legacy, we don’t do mainstream. And I hosted a special panel discussion all about the opportunity we saw ahead in gold.

It was called “Your Roadmap to Profits as Gold Shoots Higher.” And it was an all-star lineup.

Rick, Dan, Dave, and E.B. were all bullish on gold. But E.B.’s forecast stands out as particularly prophetic. As he told folks who made the trip to be with us in Carlsbad…

Next year, I think gold will take out its previous high of $1,900 an ounce. It’s already done that in almost every other currency except the U.S. dollar.

Until gold hits its previous high, people won’t be aware of what’s going on. The average asset manager has no gold stocks. He’s much more likely to be figuring out how to open a crypto wallet than he is to be buying gold.

You want to be involved in things as they’re moving through the awareness curve. Once everyone’s finally convinced themselves it’s a good idea, it’s too late. Every fundamental reason why gold should move has been laid out in the last couple of years. Now, you’re going to start seeing things take off.

Since then, the investment case for gold has only gotten stronger.

For one, the coronavirus has upended the whole economy…

The jobless rate spiked to a high this year of 14.7% in April (and is currently at 11.1%)… GDP plunged 5% in the first quarter… and more than 3,600 businesses have filed for bankruptcy.

And the Fed has once again slashed interest rates to zero…

This is all pushing what’s known as the “real yield” on Treasury bonds into negative territory.

If the real yield is high… gold tends to suffer. Gold pays no income. So it can’t compete with income on bonds.

But when the real yield on bonds is negative, gold’s lack of income isn’t a problem. 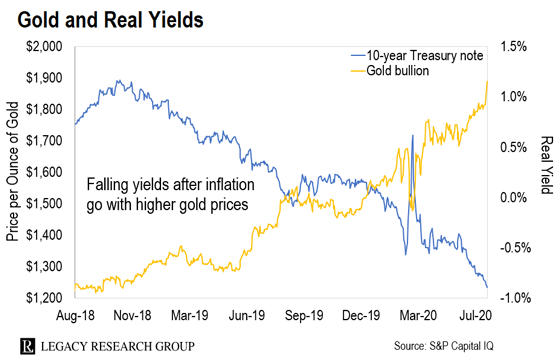 That’s why – as you can see from the chart – as real yields go negative, gold tends to surge higher.

As he told readers of our Palm Beach Daily e-letter back in April, he’s buying gold for his personal account for the first time since 1999.

As Teeka explained it to his readers…

When real rates go negative like they are now, globally, smart money flees bonds and paper money as they drop in value.

Instead, they go for the protection of gold, which rises in value and offsets the losses from holding paper money.

As I wrote to you about in March, right now it’s extremely hard to get your hands on physical coins or bars. Gold demand has been outstripping supply for months now.

So I recommend you do the next best thing and buy shares in the Sprott Physical Gold Trust (PHYS). It’s an exchange-traded trust that stores gold bars allocated in your name in vaults at the Royal Canadian Mint.

But Teeka isn’t playing the rally only through owning gold bars and coins.

As he’s been showing his readers, the real magic happens when you invest in gold miners. That’s because they give you leverage – or extra oomph – over the gold price.