Chris’ note: As colleague Nick Giambruno revealed two weeks ago in this viral video… a devastating monetary shock is on the way. When it hits, it will wipe out dollar savings and send bitcoin and gold soaring. And Nick’s timing on this urgent briefing couldn’t have been better.

As I showed you yesterday, gold just hit a record high of $1,976 an ounce. Meanwhile, bitcoin just smashed through the $11,000 mark. That’s up 50% from the start of the year. And as you’ll see in the insight from Nick below, that’s just the start of a multiyear bull run that will stun observers.

Right now, bitcoin’s major drawback is slow transaction speeds. That’s why its critics say it will never be a global currency. But thanks to an incredible innovation, it will soon able to handle every transaction on the planet…

Now, over to Nick.

Today, I’m going to slaughter a cryptocurrency sacred cow (for some).

It’s the idea that Bitcoin cannot scale without altering its protocol.

Think of the Bitcoin blockchain as simply a public database of transactions, distributed across thousands of computers around the world.

A computer that hosts the entire Bitcoin blockchain is called a “full node.”

These full nodes play a crucial role in securing the network.

About every 10 minutes, a new block – or set of transactions – is added to the existing database (blockchain).

Today – after over 11 years of transaction history – the size of the Bitcoin blockchain has grown to about 293 gigabytes (GB). The Bitcoin protocol sets the maximum size of each new block at about 1 megabyte (MB). [There are 1,000 MB in 1 GB.]

That means there is a hard limit on the maximum number of transactions the Bitcoin network can process – about 375,000 transactions a day.

Bitcoin does not have anywhere near the capacity to handle these daily transactions. Bitcoin can accommodate only about 0.019% of them – about two-hundredths of one percent.

In other words, Bitcoin would need to increase its transaction capacity by about 5,333 times to be able to process all the world’s consumer transactions.

Some people think the solution is to simply alter Bitcoin’s protocol to increase the size of the blocks.

To be able to handle all consumer transactions, the block size would have to increase around 5,333 times, to roughly 5,333 MB, or 5.3 GB.

That means every 10 minutes, each full node in the Bitcoin network would need to download an additional 5.3 GB.

By contrast, most modern laptop hard drives have about 750 GB of space. It simply would not be possible for them to run a full Bitcoin node.

Here’s the bottom line: A minor change in the Bitcoin block size won’t move the needle much on transaction capacity. We’d need an enormous change.

But doing that would cause some serious problems.

The first problem is it makes Bitcoin subject to change, which destroys its immutability.

If you can easily change the block size parameter, it’s conceivable that people could also tweak Bitcoin’s other parameters. It’s a slippery slope.

Next, they might decide Bitcoin’s monetary policy must be changed to inflate the supply. Or that certain people have too many Bitcoins and should be subject to a “fairness” tax.

The second problem is it destroys Bitcoin’s decentralization.

If the Bitcoin block size was anywhere close to large enough to handle all credit and debit card transactions, the average person would not be able to run a full node. Only those who could afford highly advanced computers and large internet bills would be able to.

In this scenario, Bitcoin would become centralized and at serious risk of capture… by petty hackers or corrupt governments.

At that point, Bitcoin might as well be another PayPal, Visa, or another centralized financial service where you need to ask for permission to do anything.

Remember, Bitcoin’s primary value proposition as a global money is that it is immutable, censorship-resistant, permissionless, accessible to everyone, and controlled by nobody.

These attributes are possible only because of Bitcoin’s decentralization.

It deserves emphasis: Without decentralization, there is no Bitcoin.

Therefore, a scaling solution that compromises decentralization is a non-starter – you would be destroying the very thing you’re trying to scale.

Here’s the bottom line: We are basically stuck with Bitcoin as it is – with a maximum capacity of about 375,000 transactions per day.

Remember, there are about 2 billion consumer transactions every day worldwide. Does that mean Bitcoin will never be able to scale and achieve widespread adoption?

As the hardest money the world has ever known, Bitcoin is only going to grow in popularity.

The demand for hard money is likely to far exceed Bitcoin’s ability to accommodate each consumer transaction on its blockchain. It will necessitate innovation.

Fortunately, solutions exist that could allow Bitcoin to scale and handle every transaction in the world. All without compromising its decentralization or immutability, and at practically no cost.

It’s the most exciting development for Bitcoin since its creation and will turbocharge its adoption.

A Competitive Free Market at Work

Bitcoin is the world’s first – and only – genuinely scarce digital asset.

Think of the digital space on each Bitcoin block as scarce real estate.

Whenever you make a Bitcoin transaction, you must pay a fee for Bitcoin miners to inscribe it onto the next block of the blockchain.

Remember, the size of each Bitcoin block is about 1 MB. There are precious few transactions – a maximum of about 2,600 – that can fit on each block every 10 minutes.

Whenever you make a Bitcoin transaction, you are bidding against everyone else in the world to get your transaction inscribed onto the next block through the transaction fee.

The higher the fee you pay, the faster your transaction will be finalized, which means it has been added to the blockchain.

Here is a chart of the average fee for each Bitcoin transaction since 2009. 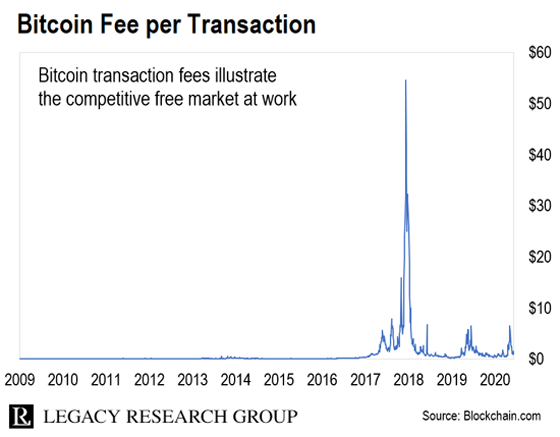 As you can see, Bitcoin’s transaction fees have fluctuated over the last few years.

That’s because the marketplace for Bitcoin transaction fees is an excellent illustration of a competitive free market at work. It ensures that only the most productive uses utilize Bitcoin block space.

For example, suppose demand for Bitcoin block space rises, which causes transaction fees to rise to $25. It would not be economical to buy a $5 coffee and record the transaction on the Bitcoin blockchain.

In other words, higher-value transactions that demand the high security of Bitcoin have crowded out small consumer transactions.

The good news is that there is an incredible innovation that will address these smaller transactions, which higher fees have priced out of the Bitcoin blockchain.

It has near instantaneous speed, zero counterparty risk, and almost zero fees. And eventually, it will be able to handle every transaction in the world – many millions per second.

I’m talking about the Lightning Network, a peer-to-peer network built on top of Bitcoin.

On the Lightning Network, people can perform an unlimited number of transactions without needing to add them to the Bitcoin blockchain. It is not necessary to delegate custody of funds to a third party – you always remain in control.

The two people can then transact with each other – and any other payment channels they are connected with – an unlimited number of times. Those transactions are on the Lightning Network and will not be recorded on the Bitcoin blockchain.

At any point, either party can close a payment channel. The outstanding Bitcoin balance at that time will return to the two people. The transaction to close the payment channel will then be recorded on the Bitcoin blockchain.

Think of it like keeping a running tab, and then settling up on the Bitcoin blockchain when either party decides to.

As of writing, there are about 32,000 open payment channels in the Lightning Network. Check out the map of connections below. Or view it real time here.

Keep in mind that the Lightning Network is still a developing technology. It’s not quite ready for mass adoption, but it could be soon.

(Readers of my newsletter, The Casey Report, are positioned with an industry titan that’s about to ramp up the Lightning Network’s adoption. If you’re a subscriber, you can catch up on the latest here.)

And once that happens, the already accelerating Bitcoin trend will get a boost. I am very confident about the Big Picture for Bitcoin… and believe everyone should own some.

P.S. We’re in a financial crisis. And Bitcoin is a great safe-haven asset to protect against a weakening dollar.

But there’s another crisis you should have on your radar.

While everyone is distracted by the pandemic… politicians have buried a sinister plan in a stimulus bill, hoping no one would notice…

The plan would confiscate everyday Americans’ wealth… and even ban those who don’t comply. I don’t want you to be blindsided.

That’s why I put together a free special briefing to help keep you and your family safe from this cash grab. Go here to access it.