Welcome to this week’s mailbag edition of The Daily Cut.

Today, one of our go-to trading experts, Jeff Clark, reveals how to read the markets during times of financial chaos…

And we catch up with Legacy cofounder Bill Bonner in lockdown on his remote Argentine ranch. 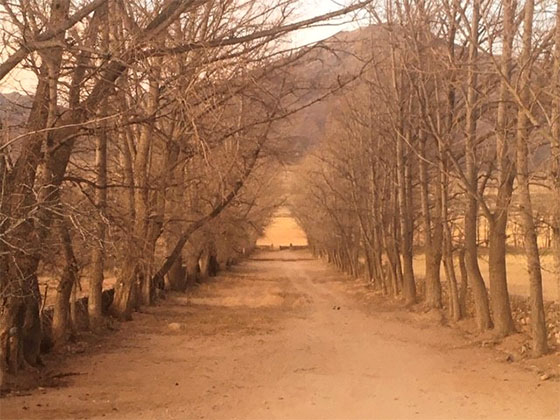 The entry to Bill’s ranch in the evening light

But first, a Casey Research reader has a question about the big theme on our radar here at the Cut this week, the War on Cash.

It’s in response to research from Nick Giambruno, who heads up our Casey Report advisory.

As he explained in this video that went viral among your fellow readers, Nick says the paper dollar is on its way out.

In its place will be FedCoin, a digital-only cash.

It will work along the lines of bitcoin. But instead of being decentralized and outside of government control, the Fed will issue it at will.

Reader question: Regarding the end of cash and the switch to a digital currency, I was at a fast-food drive-thru and saw a sign saying, “There is a national shortage of coins. Please pay with the exact amount or a credit/debit card.”

Has the U.S. Treasury stopped making coins? Is this the start of the end of cash? Are they still making currency?

Nick’s answer: Exploiting crises has long been the modus operandi and ethos of the many sociopaths that fill governments.

Governments always have a set of radical programs they could never pass under normal circumstances sitting on the shelf, waiting for the right moment. Crises offer them the perfect opportunity to roll out these programs.

The U.S. is facing a global pandemic and the biggest economic crisis since the Great Depression. And you can bet the government’s not going to let it go to waste.

One thing is for sure, the government will try to use the current crisis to accelerate the War on Cash. The end goal is the elimination of all cash and a totalitarian control grid that would make the government of China blush.

Aside from the personal freedom aspects of the War on Cash – which are extremely important – there will be financial consequences too. You’ll want to make sure your wealth is out of harm’s way. I recently released an urgent video that shows you exactly what you should do before it’s too late. If you’re interested in learning the full details of what’s going on, you can access it here.

As Nick notes above, we’re facing the biggest economic crisis since the Great Depression. Markets in 2020 are as volatile as they have been in living memory.

And one reader of master trader Jeff Clark’s over at the Delta Report wants to know how to make sense of markets using “technical analysis” – aka chart reading.

Jeff makes all his trades based off of technical setups in the market that have predictive power. He doesn’t look at balance sheets, earnings, or profits like regular investors.

Reader question: Thank you for your grounded, sane analysis based on your years of experience and clearly good judgement. How does technical analysis work when the market is insane – and how can you trust this analysis?

Jeff’s answer: Thank you for your question, Barbara.

Technical analysis – or TA – is valuable in any environment. It’s more than just drawing lines on a chart. It’s a way of measuring investors’ emotions. We can use it to tell when investors are depressed or euphoric. We can use it to determine overbought and oversold conditions. And we can use it to spot potential reversal points in stocks and the market.

Keep in mind, though, TA is not a science. It’s more of an art. And, as such, it’s constantly evolving. So, we have to allow for some flexibility in the interpretation.

For example, in March, nearly all technical indicators were wildly oversold after the S&P 500 had fallen from 3,400 to 2,500 points in just a couple of weeks. I wrote a bunch of essays at that time about how the proverbial “rubber band” was stretched to the downside and how a snapback rally could happen at any moment. But the market kept falling. The S&P 500 dropped all the way to 2,200.

That didn’t mean that TA was wrong. Clearly, conditions were oversold when the S&P 500 was at 2,500. But the market was evolving. So it took an even more severe oversold condition to create that snapback rally.

Today, the stock market is overbought. Many technical indicators are hitting overbought extremes we haven’t seen in 20 years. There’s no doubt in my mind we’re due a pullback. But the market is evolving. So it’s taking even more extreme conditions to create the setup for that decline.

There are also unique issues that affect today’s environment – the Fed’s rampant money-printing, high-frequency trading, computer algorithms, etc. All of those issues, though, are reflected in the emotions of investors.

And the best way to measure those emotions is still through TA.

Reader question: I haven’t seen many references to real estate recently. What do you think is going to happen with real estate prices? Will they be lower as a result of potential foreclosures? Or will they be higher due to the inflation you are predicting? Is this a good time to invest in real estate hard assets?

Dan’s answer: Great question. From a finance point of view, real estate is national. The 30-year mortgage rate is tied to the yield on the 10-year Treasury note. So ebbs and flows in the availability of mortgage credit are influenced by the Fed and its policies. It’s cheap to borrow now. Why wouldn’t you?

But that assumes you can find a lender. Or that the lenders can find a secondary buyer for the mortgages they write. That’s probably the big risk right now… or the big uncertainty. With nearly 50 million people unemployed, and the Overton window opening up for “cancel my rent” and “cancel my mortgage” movements, lenders might be cautious about extending new credit.

As part of my bolthole strategy, I see residential or rural American real estate as “functional wealth.” You can get money out of the banking system and into a real, tangible asset.

It’s a diversification move as much as anything. Residential real estate may get a nice tailwind from the exodus of people leaving big cities and high-tax states or lockdown states. But you’re not doing it for the financial gains. You’re doing it because it promotes the physical and financial safety of you and your family.

Colleague Tom Dyson and I are meeting up later this month in Wyoming. We’re going to compare notes on our experiences traveling the length and breadth of the country. My sense is there are plenty of places where you can buy cheaply, get a lot of house (or land), and improve your quality of life while lowering your cost of living.

But it involves a mindset, too… being willing to change how you live. This is a lifestyle choice, not a mere trade or investment decision.

Switching gears, a Daily Cut reader is keen to invest in the legal cannabis boom. But she’s hit an obstacle…

Reader question: Chris, thanks for your articles, very informative. I can’t buy the Horizons Marijuana Life Sciences Index ETF (HMLSF). My brokerage is Schwab. The problem is that HMLSF is foreign and not listed on U.S. exchanges. Do you have a different recommendation we can buy instead?

Chris’ answer: Thanks for your question, Tina. Sorry to hear of your issue with Schwab. The Horizons Marijuana Life Sciences ETF is a Canadian-based ETF, and U.S. investors have access to it on the OTC (over-the-counter) market. Unfortunately, the levels of access vary among the different online brokers.

It may be worth reaching out to Schwab to ask about its Global Account add-on. Adding that offers greater freedom in trading foreign-based investments.

But there are a couple cannabis ETFs listed in the U.S. that will serve as a good alternative. The first is ETFMG Alternative Harvest ETF (MJ). Like HMLSF, it gives you broad exposure to the cannabis industry. MJ’s holdings include some of the largest cannabis companies on the planet.

But keep in mind that this isn’t a pure play on legal cannabis. One-quarter of the companies in the ETF are tobacco companies. These companies earn a portion of their revenue from cannabis. But they mainly focus on tobacco.

The other alternative is the Global X Cannabis ETF (POTX). It also provides exposure to some of the largest cannabis companies around the world. But with positions in just 25 stocks, it offers the narrowest exposure to the cannabis industry compared to HMLSF (54 stocks) and MJ (36 stocks).

We’ll wrap up today’s mailbag with a message for Legacy cofounder Bill Bonner.

If you’re a regular reader of his e-letter, Bill Bonner’s Diary, you’ll know that Bill has been locked down on his ranch in northwestern Argentina since March.

Every day, Bill writes his Diary from his refuge high in the Andes.

Bill’s usual beat is money… and markets. But once in a while, he turns his attention to life in the remote Calchaquí Valley.

And last week, he described a cattle roundup with the gauchos on the ranch…

Bill, I really enjoyed this one. I have done all that in the same way. As a kid, I worked on a dairy farm in Washington State where we would dehorn the cows. We ran them into a chute like the one you have.

My job was to put the rope around the cow’s neck, pull it tight, and hold on. The boss would use a big pair of bolt cutters and cut off a horn close to the head. The blood would shoot out and run on the ground. The boss would stop the cut horn from bleeding with some sort of white powder. Then he repeated this with the other horn. Then I removed the rope and released the cow. And away she would go.

In rodeo “bulldogging,” you want horns. I would come off my horse headfirst. With my left hand, I’d grab the right horn. Meanwhile, my right forearm would go under the neck, from the right side of the cow to the snout. With my right arm, I’d pull the snout up, and with my left hand, I’d pull the right horn over. That way I could turn the head of the cow, twist its neck, and plow the left horn into the dirt – shortening the time to get first place.

Now I’m 75 and too old to do that fun stuff anymore. But I like reading how your boys do it. Hardly any different.

In case you missed it, here’s that link again to Bill’s essay about life on the ranch.

That’s all for this week’s edition of The Daily Cut mailbag. We’ll be back next Friday with more of your questions and our answers.

If you have any queries you’d like to put to the Legacy “brain trust,” write us at [email protected].