The FDA has issued a warning on CBD…

As you may have heard in the press, the Food and Drug Administration (FDA) just issued a warning on CBD.

It sent 15 warning letters to the heads of American firms selling CBD products – from oils… to lotions… to gummies… to tinctures.

It also issued a press release saying it had yet to make up its mind on the safety of CBD.

But the “Federal Death Authority,” as Legacy Research cofounder Doug Casey likes to call it, has no clue what it’s talking about.

So if you’re considering selling your CBD stocks… or you’re worried about using CBD products… rest assured. The FDA news doesn’t add up to a hill of beans.

CBD is fully legal in the U.S…

It’s one of the 113 known chemical compounds (cannabinoids) of the cannabis plant.

Last December, President Trump signed into law a bill that makes CBD fully legal nationwide. You can even carry it on planes anywhere in the U.S.

That’s because CBD doesn’t get you “high.” But it has revolutionary potential as a medicine.

The FDA has greenlighted a CBD-based epilepsy drug, Epidiolex. It has been shown in clinical trials to reduce seizures by up to 26%.

And folks use CBD to treat everything from sore joints, to anxiety, to Parkinson’s disease.

Even our own Teeka Tiwari swears by it…

As he reported to our Palm Beach readers…

I have a lot of pain in my joints from lifting weights – especially in my shoulder. And although CBD doesn’t eliminate the pain, it drastically reduces it. Its anti-inflammatory effects are real.

In the past, I’d wake up with every joint in my body hurting. I’d have to gradually get out of bed. Some days, it took much longer than others.

But I started taking half a dropper full of CBD every day. And it’s had an outstanding effect. I can move again like I did in my early 30s. It no longer takes forever to get out of bed. Getting up the stairs isn’t a struggle anymore, either.

Of course, that’s not scientific data. But from Teeka’s personal experience, at least, it’s remarkable.

CBD is everywhere these days…

There are even dog kennels that give CBD gummies to pets.

And corporate brands such as Ben & Jerry’s, Unilever, and Anheuser-Busch are getting in on the action. They all have CBD products in the pipeline. Walgreens, Kroger, and CVS have vowed to sell them.

This isn’t a problem for most Americans.

According to Pew Research, two out of three Americans are in favor of legalizing cannabis. That’s up from the one in 10 when Pew began its poll in 1969. 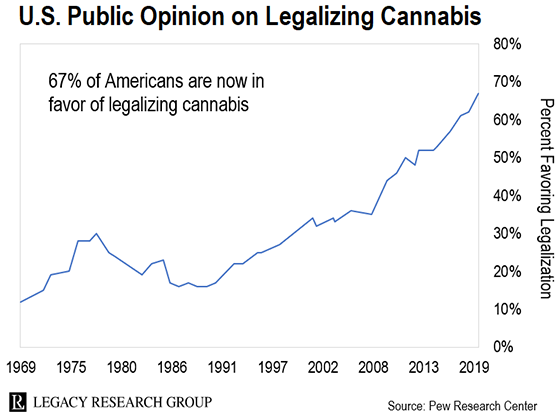 And last month, the House Judiciary Committee passed legislation that will see a debate on the floor of Congress over lifting the federal ban on cannabis.

It will be the first time Congress debates such a bill.

But what about the FDA’s concerns?…

This is from FDA’s mission statement:

The Food and Drug Administration is responsible for protecting the public health by ensuring the safety, efficacy, and security of human and veterinary drugs, biological products, and medical devices.

That all sounds well and good… but the FDA doesn’t do a very good job of it.

Or think of all the disclaimers of shocking side effects at the end of every FDA-approved-drug commercial – including hallucinations… psychosis… even cancer.

As we’ve been showing you, cannabis has been used safely for thousands of years. And according to the U.S.’ National Institute on Drug Abuse, there have been no reports of teenagers or adults dying from cannabis alone.

Survey data reveals that Americans use cannabis products billions of times a year. If the risk of death was one in a million, that would mean a thousand cannabis overdose deaths a year.

So don’t get spooked…

The cannabis megatrend is still closer to the beginning than the end… despite the brouhaha over legal CBD.

But it won’t be a straight shot higher. And not every pot stock will make it.

There are 113 unique compounds in the cannabis plant. Several of them could be real breakthroughs. Right now, it’s just THC and CBD. I’ve used CBD after a strenuous workout, and found it really is a very helpful painkiller, among other favorable properties. That business is going to continue growing. That’s the good news.

The bad news is there are hundreds of public marijuana companies. And who knows how many thousands of private ones. There’s going to be a giant glut of every kind of cannabis product. The space just isn’t big enough for all of them. Most of them are going to go bankrupt.

We agree with Doug. That’s why we’ve been urging you to stick to cannabis companies with at least double-digit sales growth, little debt, and cash and equivalents making up 20% of the market cap.

And if you want to know how you can invest in Teeka’s top recommendations for 100% legal profits on CBD this year, watch this interview.

What do you think? Have you used CBD products? Do you find they help? Should the FDA be more concerned with CBD than the opioid epidemic?

Let us know your thoughts. Write us at [email protected].