This was a very different Thanksgiving for bitcoin “evangelists”…

Two years ago, bitcoin was the hot topic over Thanksgiving dinner.

And as Pop was carving the turkey, bitcoin was midway through a parabolic move that would take it to an all-time high of $20,089 by the end of the year.

You can see all that in the chart below. 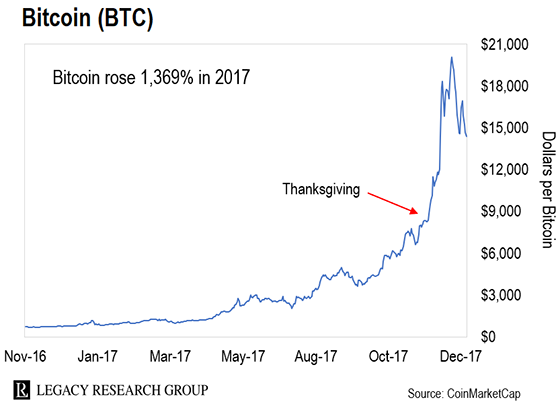 This led to a lot of evangelizing around the dinner table… especially from family members who had bought in ahead of the boom.

Maybe you were even one of them.

It wouldn’t shock us…

World-renowned crypto investing expert Teeka Tiwari first recommended bitcoin to his readers in April 2016, when it was trading at just $428.

But here at the Cut, we’re not worried.

When you look behind the headlines, there’s plenty of good news to celebrate. We’ll get to that in a moment…

But first, some context for last month’s tumble.

Bitcoin’s ALWAYS had its wildest swings in November…

That’s according to Bespoke Investment Group.

Since 2011, it calculates that the biggest monthly change – up or down – for bitcoin has been in the month of November.

The average gain or loss is about 20 percentage points higher than the next most volatile month. 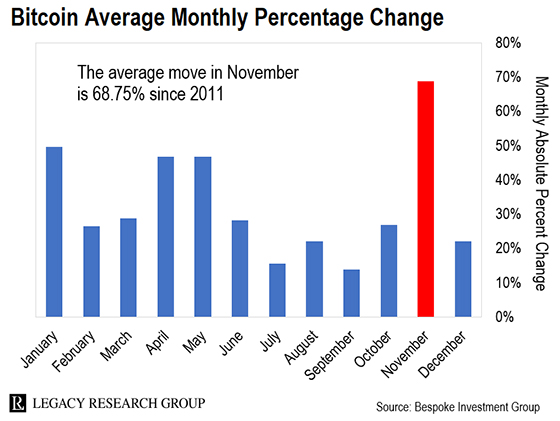 This puts the past month’s roller-coaster ride in perspective.

One theory is that this is down to “tax-loss harvesting”…

And like when you sell your house, the taxman makes you report capital gains on your bitcoin and other cryptos.

This applies whether you’re spending bitcoin… swapping it for another crypto… or swapping it back for dollars.

Tax-loss harvesting comes in handy if your crypto holdings are down in value… but you made some gains earlier in the year.

In that case, you can sell some of the cryptos that are down in value in your portfolio. You record a loss on them. You then use this loss to offset your gains elsewhere.

This allows you to slash your capital gains tax bill.

That’s the position many crypto investors are in right now… 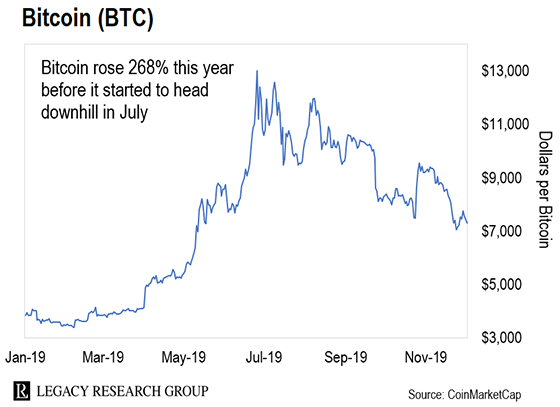 But it’s been downhill since then.

But investors often use tax-loss harvesting to offset those gains by selling some bitcoin.

There are really two crypto markets…

And often, they’re out of whack. Here’s Teeka with more on that…

The internal market deals with the long-term drivers of crypto prices. This has to do with innovation and adoption. But there’s also the external market. It’s the constant stream of price information you see crossing your screen on a minute-to-minute and hour-to-hour basis. And it’s driven by all sorts of factors… not just the all-important fundamentals.

Right now, most folks are hearing about the external market. But there’s so much that’s positive right now in the internal market. And it’s these internal levers that will eventually push prices higher.

One of the most powerful levers is the arrival of Wall Street money into the crypto market. As Teeka told our Palm Beach Confidential readers at the start of the year…

Once institutions are positioned to profit, you’ll see the entire crypto narrative transform from a wild, unregulated fringe market to a socially acceptable alternative asset class.

This is the future in front of us, and it’s critically important you stick around for it.

Think of it this way…

Right now, the value of all bitcoins in circulation is $132 billion. The global stock market is worth $69 trillion.

So even if only 1% of the value of global stocks flows into bitcoin, it will rise 523% in price. (This is calculated from a rise of $690 billion in the total value of all bitcoins.)

And as Teeka predicted, institutional investors are already showing increasing interest in bitcoin.

That’s according to Michael Sonnenshein, the managing director of Grayscale Investments. It’s the firm behind the Grayscale Bitcoin Trust (GBTC), which allows you to own bitcoin through your brokerage account.

Currently, this fund is available only on the OTCQX market. This isn’t a regular stock exchange. Instead, it’s a decentralized market where stocks and funds are traded directly by a network of dealers.

But as Sonnenshein told Bloomberg, the trading volume in GBTC has tripled since this time last year.

And that’s without trading on a regular exchange.

And in the third quarter of this year, Sonnenshein says 84% of the money flowing into GBTC came from Wall Street institutions – hedge funds, endowments, pensions, and family offices.

So this is no time to cut and run…

Despite its poor performance in November, bitcoin is still up 95% year to date.

And as Teeka’s market script for cryptos continues to play out – and more deep-pocketed investors buy bitcoin – prices will surge higher.

Just remember, it’s vital you never invest money you can’t afford to lose in crypto. And Teeka recommends buying bitcoin directly, not through a fund.

That’s because GBTC often trades at a premium to bitcoin, making it an expensive option.

So stick to buying your bitcoin on an online exchange and storing it in a digital wallet.

If you don’t know how to get started, we’ve got you covered…

Teeka’s Palm Beach Confidential subscribers can learn how to buy, store, and trade bitcoin – and dozens of other cryptos – in the Crypto Corner section of the members-only website.

If you’re not already a Teeka subscriber, check out our free bonus report on buying and storing bitcoin. As a Daily Cut reader, you can access it here.