This week, I (Chris) have been visiting an old university pal in a small village in Oxfordshire, England.

And last Monday, about 50 miles south from here… the Polish government did something you’d expect to see only in a blockbuster heist movie…

The Poles had been storing their gold – worth about $5 billion – in a private vault in northwest London. Then, in the middle of the night, Polish officials packed all 100 tonnes of their gold into armored trucks… sped it to a London airport… secured it on eight planes… and flew it all to Warsaw.

The gold was put in boxes and then strapped down with netting. Here’s a picture…

Polish officials then met the planes at two separate airports and split each shipment into three armored trucks. Then they took it all to secure vaults on Polish soil.

Why should you care about what Poland does with its gold?

As you’ll see in today’s dispatch… it shows that gold is once again being valued as money.

That means more demand… and higher prices ahead.

Remember, it’s our mission here at the Cut to put the trends that really matter on your radar before they hit the nightly news.

And one of the most important trends you need to be aware of right now is this resurgence of gold as money.

The Greater Depression will likely hurt consumption of base metals but it’s going to help gold; I’m reasonably confident gold is going to be re-instituted as day-to-day money.

The Greater Depression is the collapse Doug sees on the horizon…

Right now, stocks are hitting all-time highs… and the good times are rolling on Wall Street.

And the good times may keep rolling for a while longer.

But as Doug warned here, the U.S. economy is a “house of cards, built on quicksand, with a tsunami on the way.”

The good times will eventually end. And we’ll get another downturn.

Central banks will try more “stimulus” to reverse the slide. But Doug says that will just make things worse…

Rather than let the market adjust itself, government typically starts the process all over again with a new and larger “stimulus package.” The more often this happens, the more ingrained become the distortions in the way people consume and invest, and the nastier the eventual depression.

This is why I predict the Greater Depression will be… well… greater. This is going to be one for the record books. Much different, much longer lasting, and much worse than the unpleasantness of 1929-1946.

Nobody can predict the future with perfect accuracy. But even if Doug is only half right… and we get “just” a nasty downturn… you’re still going to be happy you have plenty of gold on board.

This realization is getting traction from mainstream investors…

He warns that, at some point, nobody will want the U.S. dollar or U.S. bonds anymore. And they’ll look to other assets for safety.

And as he put it recently, that leads to an important question…

The question is, what else? That’s the environment I think that we’ll be in. And there’s a saying that gold is the only asset you can have that’s not somebody else’s liability.

Gold is wealth. Its value doesn’t come from someone else’s promise to pay.

China and Russia are stocking up at a record pace.

Take a look at the chart below. It shows the rise in gold reserves for China (black line) and Russia (green line) since the start of 2015. 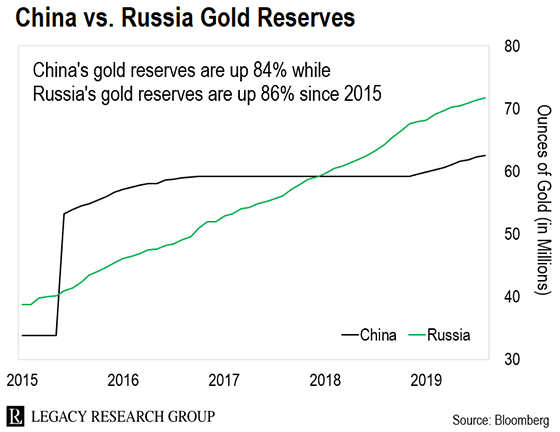 As you can see, the Chinese and Russian governments roughly doubled their gold stockpiles over the last five years.

The Dutch central bank put it best… In a major monetary reset, it said, “gold stock can serve as a basis” to rebuild the global monetary system.

That’s because, “Gold bolsters confidence in the stability of the central bank’s balance sheet and creates a sense of security.”

That’s why you can expect more gold stockpiling.

So these nations have a lot of catching up to do to the U.S. And they increasingly see themselves as equals.

That means the gold price will keep climbing as the largest gold buyers return to the table.

Gold is the best defense from failing government currencies…

Tom cofounded Palm Beach Research Group along with Mark Ford back in 2011.

And last year, he cashed in all his U.S. dollar savings and swapped them for gold. Since then, he’s been traveling the world with his family, waiting for his bet to come good.

As he has been telling readers of his free daily newsletter, Postcards From the Fringe, many countries are about to weaken their currencies – including America. And that will be the catalyst for higher gold prices. Tom…

Look at Trump’s recent tweets. Or the U.S. government’s $22 trillion in debt (which is effectively a massive bet on the dollar losing value). America needs a weaker dollar to win back industry from overseas and keep the credit flowing.

Look at the Chinese, who want their products to seem cheap in the rest of the world. Or the Japanese and the Germans, who compete with the Chinese. Or the Brits, who are about to Eurexit…

We’re entering an era of “competitive devaluations,” or “currency wars.” Gold will be the only practical way to preserve purchasing power.

What does it mean for the gold price? Tom again…

The markets are starting to sense this, I think, but it’s still just a trickle. Yet as more and more people buy gold, we get closer to the tipping point… the bursting dam… the avalanche.

That’s the moment when the idea cascades and there’s a stampede into gold. Gold will go far higher than it is today… maybe even double or triple. We’re not there yet. But it feels like the moment is getting closer.

You want to own gold ­– now. It’s the best form of “disaster insurance” you can buy. And it’s the best way to protect your wealth from tumbling fiat currencies.

Tom recommends you stick to physical gold for protection…

There’s hobo gold – actual gold coins – which you can lock in a bank vault. There’s brokerage gold – gold in digital or share form – which you can buy with your 401(k) or IRA.

There’s greedy gold – derivatives of gold, like mining stocks or gold options – which goes up much faster than gold.

If you’re still clinging to your buy-and-hold 401(k), index exchange-traded funds (ETFs), and mutual funds, you’re in the WRONG place. I’m afraid you’re about to be made into the sucker. Gold is the place to be now.

For more on how to pick up physical gold, you can access a special report from the folks at Casey Research.

In it, you’ll find details on the top four dealers they recommend. And you’ll learn why the Casey team thinks you should place 10-20% of your portfolio in gold bullion.

Plus, if you’re willing to bear more risk for higher upside, this guide even shows you the best way to buy gold stocks. As you’ll see, it comes down to three steps…

Read the guide for free here.

And let us know: How are you preparing for the coming currency crisis? What kind of gold are you holding? Write us at [email protected].

Before you go, an important reminder…

As we told you, Larry has a knack for trading the markets for fast gains.

It’s how he built his wealth over a 35-year trading career. But now, he’s taking everything he’s learned and showing everyday folks how to use those same strategies.

In a special event airing on December 11 at 8 p.m. ET, Larry aims to generate $70,000 or more in less than an hour – and donate the proceeds to a local South Florida charity.

You’ll see the results of Larry’s challenge… and how he uses that same strategy to make money every single trading day.

But you don’t have to wait until next Wednesday to hear more from Larry. Every day leading up to his event, he’ll release a new installment of a video series exploring his trading process.

And the first one – detailing the early days of his career and what he sees ahead for future generations of traders – just released. Just enter your email address here to watch it.

P.S. As I mentioned up top, I’ve been spending the last couple of days in a small village in Oxfordshire, England.

Tomorrow, I’ll be at a “matriculation” ceremony for a friend who’s starting a postgraduate writing course at Oxford University.

Here’s a picture of the church in the village of Stratton Audley, close to where I’m staying. It dates back to the 12th century. 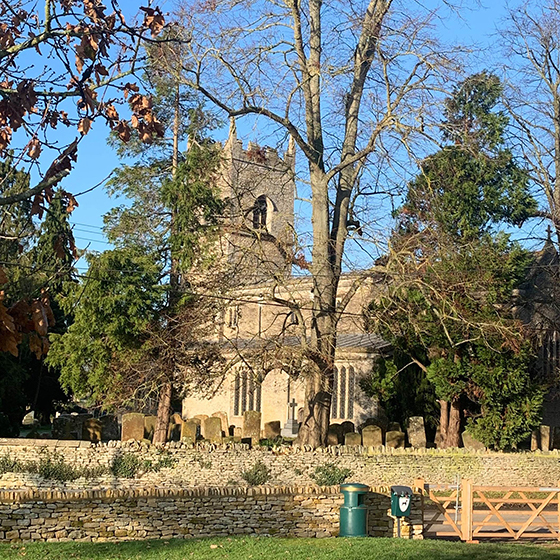 And here’s a picture of the village pub. It’s called the Red Lion. It was built more than 400 years ago. 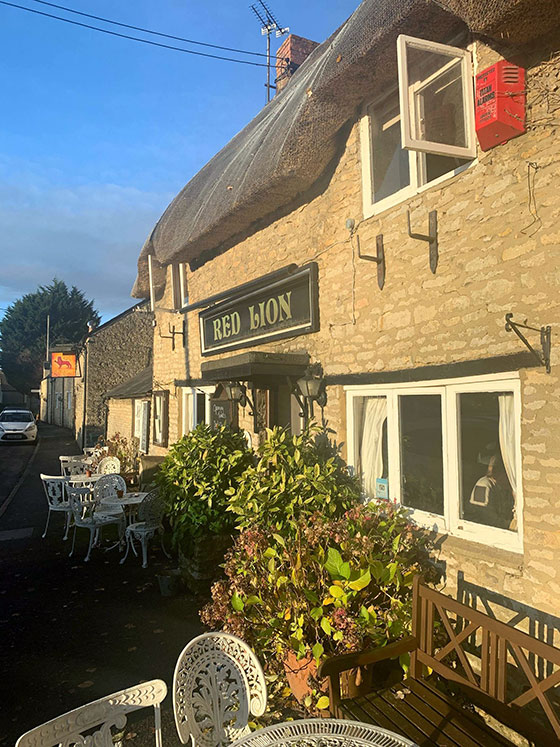 As you can see, it has a thatched roof. And inside at this time of year, there’s a roaring fire. If you ever go there, ask for the landlord, Frank. He’ll sort you out with a warm, nut-brown English ale.