That was Palm Beach Research Group cofounder Tom Dyson’s big call back in 2000.

Sentiment had gotten so bad, the British government sold more than half of its reserves for the “fire sale” price of less than $300 an ounce. (An ounce of gold now costs more than $1,700.)

Meanwhile, the dot-com bubble was in full swing. If you’re of a certain age, you’ll remember the euphoria about stocks around that time. People thought stocks were going to the moon.

But the exact opposite happened. Gold zoomed. Stocks went nowhere.

And as you’ll see today, Tom believes the same thing is about to happen over the next decade.

It’s why he’s hosting a special briefing on gold tomorrow night at 8 p.m. ET. He says gold’s the only thing that could realistically make you rich going forward.

After Tom’s call in 2000, gold went on to become the top-performing asset of the decade.

It’s all in the next chart. It tracks gold bullion; gold stocks, by way of the Arca Gold BUGS Index (HUI); and the S&P 500. 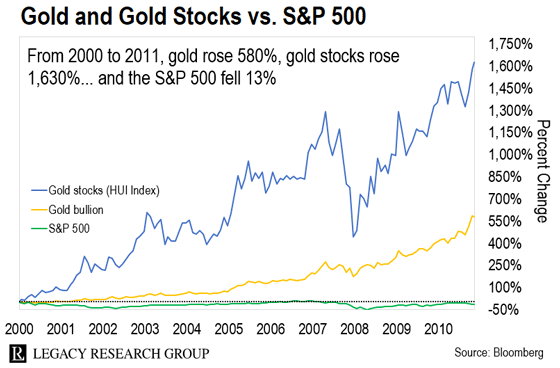 And Tom reckons this time around, gold bullion will shoot past $10,000 an ounce.

That’s a 474% gain from here. And as they did last time, gold stocks will shoot even higher.

That’s because gold stocks have leverage on the gold price. Read up on how that works here.

But what about the overall stock market?

So far, at least, it’s a V-shaped recovery in the stock market.

A lot of folks think stocks are out of the woods.

But that’s not the lesson history teaches us…

It’s something Dan Denning has been warning paid-up readers of his and Legacy Research cofounder Bill Bonner’s advisory, The Bonner-Denning Letter.

And as they’ve been pointing out, in past stock market crashes, it paid to stay on the sidelines even after stocks bounced. Here’s Dan with the details…

In short, investors should have sold, not bought, the snapback rallies after the 1929 and 2000 plunges.

Dan reckons the Dow could fall 80% from here…

That would take the index back to 4,915 points… or roughly where it was when President Clinton occupied the Oval Office.

That may sound shocking. And it’s certainly not a mainstream view right now… even among the analysts at Legacy.

But it’s in line with the aftershocks that hit stocks after the initial post-crash bounces in 1929 and 2000.

As regular readers will recall, this ratio tells you how much it costs to buy the Dow index in gold terms.

And it’s a useful contrarian indicator for what’s ahead for gold and stocks.

Here’s a 30-year snapshot of what it looks like. 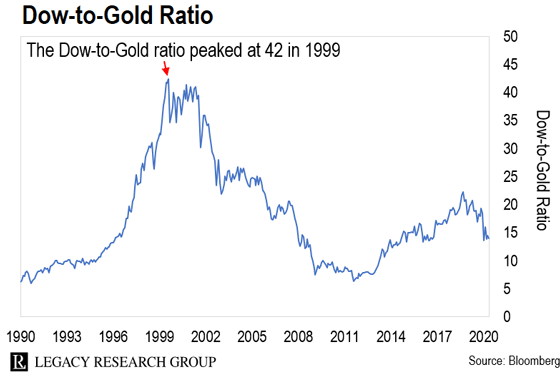 That was seven months before the peak of the dot-com boom. Gold was dirt cheap relative to stocks. It was a great time to lighten up on stocks and load up on gold.

Between the peak for gold in September 2011 and August 2018, stocks outperformed gold again.

But now that trend has reversed. Right now, the Dow-to-Gold ratio is at 14… and falling.

And Tom believes gold will outperform stocks until the Dow-to-Gold ratio gets back to about 5 again. Here’s Tom with more on that…

The Dow-to-Gold ratio has been falling since October 2018, when it was at about 22. That’s when I made a personal $1 million bet. I sold all my stocks and bonds, and I invested the proceeds in gold.

Right now, the Dow-to-Gold ratio’s “primary trend” – the trend I expect to win out – is down. It’s at 14… and falling. That’s when you want to own gold.

I’m going to hold on to my gold until the ratio gets down below 5 – meaning stocks are dirt cheap in gold terms. At that point, I’ll reverse my trade. I’ll sell my gold and load up on stocks again.

How does the Dow-to-Gold ratio fall below 5? Either stocks crash hard… or gold rallies hard… or a bit of both.

Tom is a professional investor with more than 30 years’ experience. (He bought his first stock when he was six.)

He’s made these kinds of highly risky bets before. (As I showed you, he turned a net profit of $500,000 off his initial bitcoin investment from 2011.)

But for 99.9% of investors, the best advice is to follow a sensible asset allocation plan.

That means owning some stocks, cash, gold, real estate, and cryptos in separate “buckets” in your portfolio.

You never go “all in” or “all out” on any of your buckets. But as you get more or less bullish on each bucket, you can increase or decrease its size.

And if Tom is right, now is the time to increase the size of your gold bucket.

It’s called Tom’s Portfolio. It will focus on the strategy he’s personally using to take advantage of the setup in gold today.

This is no fuddy-duddy strategy, either. Tom intends to knock it out of the park on tiny gold stocks.

I’ll leave him with the final word on that…

The gold stocks I’ve chosen are the most leveraged… the most junior… the most uneconomic. My ideal gold stock is a hill full of gold in the middle of nowhere. There are no roads to it. There’s no electricity there. It’s completely uneconomic to mine at current prices. You can buy the shares in those companies for next to nothing.

But if gold shoots up to $2,000… or $5,000… or even $10,000… that little hill in the middle of nowhere suddenly becomes attractive, exploitable, and economic. Its shares resemble options contracts. They give you enormous leverage – or extra oomph.

At the moment, shares in these companies are not very valuable. But if gold skyrockets – and I think it will, by about 6x – then these stocks could go up 20x… or even 30x and higher.

Make sure to hear it all from Tom directly at his urgent gold briefing tomorrow night.

Consider buying shares in the Sprott Physical Gold Trust (PHYS). This is a way to legally own gold stored in a vault at the Royal Canadian Mint.