He’s one of the best “noses” in our business…

Our master trader, Jeff Clark, is a long-term gold bull.

Like the rest of us here at Legacy Research, Jeff has a healthy dose of skepticism when it comes to the stability of the financial system… and government-issued currencies.

In fact, he believes gold is one of the best long-term investments in the world right now.

But Jeff’s bread and butter is sniffing out short-term market moves… and trading them for profits.

And he has one of the best noses in the business.

Here’s what he told readers of our free trading newsletter, Market Minute, yesterday at 7:30 a.m. ET. That’s two hours ahead of the opening bell on Wall Street. Jeff…

The gold sector is on the verge of generating its first sell signal since 2016.

Gold stocks have had an amazing run higher over the past few months. The sector has been much stronger than I anticipated. And the current rally has lasted much longer than I thought it would.

But the gold sector remains vulnerable to a sharp and swift pullback.

And this morning, at 7:30 ET, he issued a second warning. He wrote to Market Minute readers:

Buying into the gold sector right now is a mistake. You’ll have a better chance to do so in the weeks ahead.

Let’s be clear… Gold stocks are in a new, long-term bull market. They will be higher several months from now than where they are today. But, in the short term, they’re most likely headed lower.

It was an uncanny call.

Look what happened to gold stocks next…

The chart below is of the VanEck Vectors Gold Miners ETF (GDX). It tracks the performance of 44 top global gold mining stocks. As you can see, it fell more than 5% today. 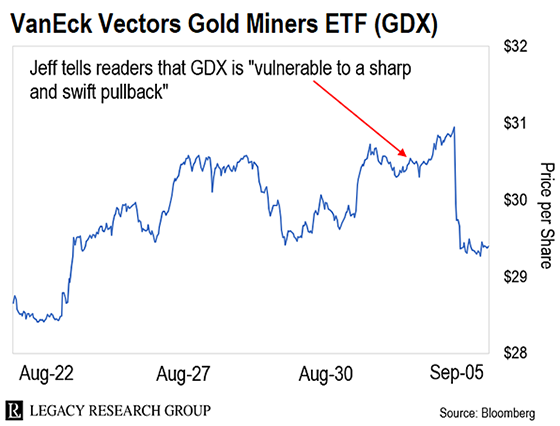 And as we’ll show you in today’s dispatch, Jeff believes there’ll be more of a pullback over the coming weeks.

It’s not a reason to panic… or sell your gold. But it does indicate better buying opportunities ahead if you’re still adding to your position.

At the Cut, we’ve been bullish on gold for more than a year…

In fact, the first recommendation from the Legacy team that we wrote to you about was to buy gold.

That was in August 2018. Gold was beaten down and hated. And colleagues E.B. Tucker and Dave Forest were telling their readers to get ready for a turnaround. 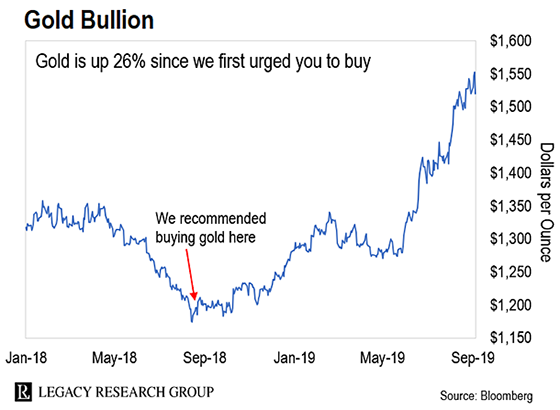 And gold stocks have done even better. 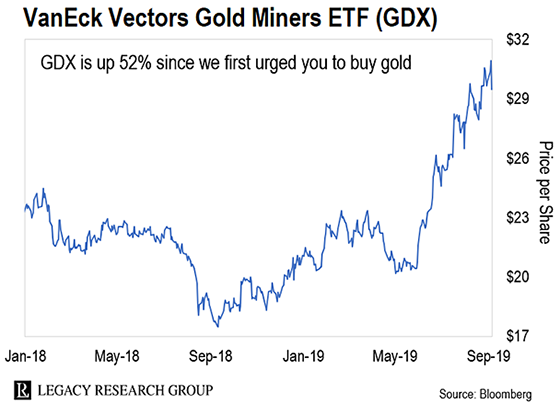 Even after today’s pullback, GDX is up 52% since our call last August.

E.B., our go-to gold expert at Legacy, says he wouldn’t be surprised to see it take out its all-time high of $1,900 an ounce.

Over the long term, the markets move in long, powerful trends.

Here at the Cut, we call them megatrends. They’re the kind of trends you can profit from over years… even decades.

But over the short term, markets move like a rubber band. Regular readers know what we mean. As Jeff has put it before in these pages, the market gets stretched too far in one direction, then it snaps back.

And that’s what happening right now with gold and gold stocks.

It’s all in the chart below…

This is a tool Jeff uses to tell him how far the rubber band has stretched on gold stocks. 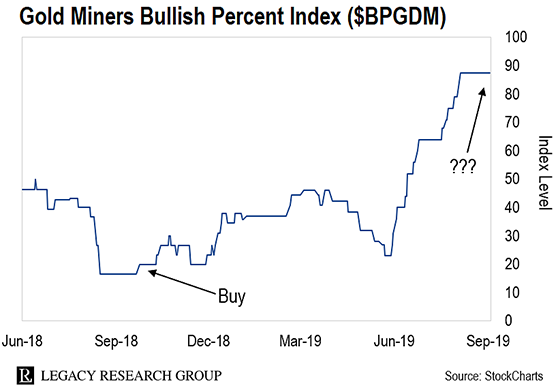 A bullish percent index gauges overbought and oversold conditions. It tells us when the proverbial rubber band is stretched too far in one direction.

For example, last September, we reached a deeply oversold reading of 13. That’s the left arrow on the chart. That triggered a buy signal for gold stocks. It took a while to get going, but that turned out to be one heck of a buy signal. Since then, the gold mining sector is up 65%.

That’s great for folks who bought into the gold rally last September. And if you’re a longtime Daily Cut reader, that hopefully includes you.

But that run-up stretched the rubber band too far in one direction… and now we’re seeing it snap back.

Again, this is not a reason to panic… or sell your gold…

But after its big run-up, the gold market does look like it’s taking a breather.

Here’s Jeff with more on what that means for you…

The GDX gold miners ETF is trading almost 39% above where it started the year. Now is probably a good time to press pause on buying gold stocks.

I’m not saying we’re headed for the same sort of decline this time around. But I am suggesting that now is probably not the best time to be putting new money to work in the gold sector. We’ll likely have a better chance to do so in the months ahead.

If you own gold already, that means sitting tight. And as Jeff said above, if you’re adding to your portfolio, now’s a good time to hit pause.

And of course, when Jeff sounds the all clear again, we’ll update you on that.

In the meantime, if you’re interested in learning more about how Jeff profits from gold… whichever way it’s trending… make sure and check out his new presentation.

It’s about a trading technique that offers up to 5 or 10 times bigger gains in the gold market… in a fraction of the time.

Check it out here.

Next week, we’ll be coming back to gold’s sister metal, silver…

Gold wasn’t the only metal pulling back. Silver is also down 5% over the past 24 hours.

But as we told you yesterday, silver is crucial to one fast-growing energy market. It’s why E.B. calls silver the “energy metal.”

And as you’ll see, it’s going to cause demand for silver to soar.

Stay tuned for more on that next week.