Just over one year ago, colleagues E.B. Tucker and Dave Forest laid out the contrarian case for buying gold. (Catch up here and here.) 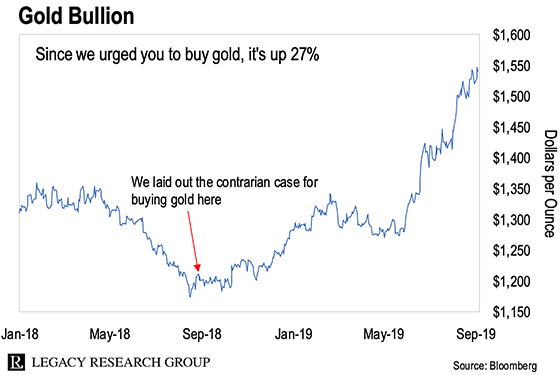 And as we showed you last week, the gold rally has plenty more gas in the tank.

But gold isn’t the only precious metal on a tear…

So is its sister precious metal, silver. 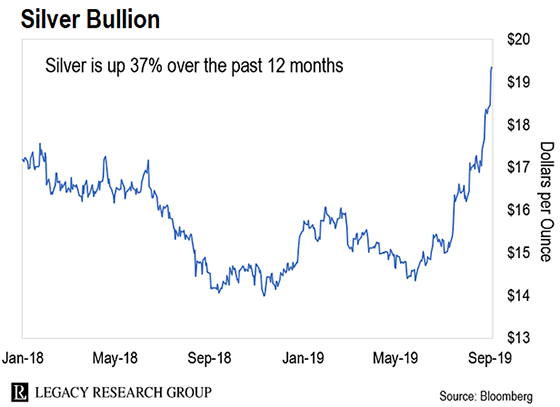 As we’ll show you in today’s dispatch, if you’re a gold bull right now, you should be a raging silver bull.

When silver takes off, you don’t want to miss out…

Take the last time gold and silver prices soared together. That was in the wake of the 2008 global financial crisis.

And E.B. says silver is about to do something similar again…

And when he’s not researching new investment opportunities for his readers, he’s building a fast-growing precious metals “royalty” company. (It finances new mines in return for a share of the profits – or royalty – on the gold and silver they produce.)

This has made E.B. a connoisseur of the precious metals market cycle. And it shows…

And in July, in an interview at the Sprott Natural Resource Symposium in Vancouver, he said silver would hit $20 this year.

E.B. is more bullish on silver than he is on gold…

Don’t get us wrong. E.B. believes there’s a monster rally still ahead for gold.

But he thinks silver will do even better.

Look at the following chart. It tracks how many ounces of silver it takes to buy an ounce of gold. When the gold-to-silver ratio is high, it means silver is cheap relative to gold. 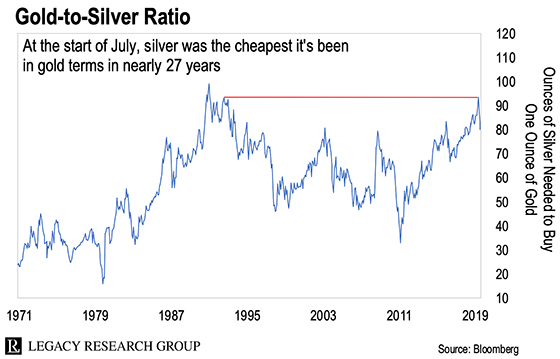 As you can see, at the start of July, silver was at its cheapest in gold terms since October 1992. And although the ratio has fallen since… silver is still historically cheap in gold terms.

It’s one of the reasons E.B. likes silver so much right now. As he puts it…

When the ratio hits extreme readings… it signals turning points in the precious metals markets.

In June, gold rose 8%. But silver sat flat. This helped push the gold-to-silver ratio to a 26-year high of 93 on July 3. It took 93 ounces of silver to buy one ounce of gold. And that’s when silver really took off. It’s up 29% since the start of July.

Silver still has a lot of catching up to do, in other words…

As we mentioned up top, the last time the two metals rallied together, in the wake of the 2008 crash, silver delivered gains three times larger than gold delivered.

As E.B. has been telling his readers, gold is in the early innings of a long-term rally. But silver is setting up for even more explosive gains over the next few months.

Here’s how he recommends you profit…

First, you may want to look into owning at least some physical silver. Just like with gold, physical coins are a good starting point because they represent a real, hold-in-your-hand asset.

But you’re going to see the biggest returns in the silver mining stocks. Like with gold stocks, they give you leverage to the price of the physical metal. When the silver price moves an inch… silver stocks move a mile.

E.B. is not a fan of exchange-traded funds (ETFs) when it comes to buying mining stocks. They’re easy to buy and sell instantly. But if you dig deep, they own a lot of laggard companies you don’t want to touch.

As E.B. says, all mining firms are not created equal. So this is one sector where it pays to own the best.

In Strategic Investor, he covers the gold and silver mining stocks with the most profit potential.

For instance, Pan American Silver (PAAS) is up 47% since E.B. added it to the Strategic Investor model portfolio last November.

And shares in gold exploration company Aurion Resources (AU-V) are up 156% since E.B. added this company to the model portfolio in August of last year.

For more on how to take Strategic Investor for a test drive… and get access to E.B.’s upcoming recommendations… read on here.

Tomorrow, more on why you want some exposure to silver in your portfolio…

Silver is different from gold in more ways than you may think.

Silver is the world’s best conductor of electricity… it’s the most reflective metal… and it also produces some of the world’s strongest alloys.

In fact, silver is so important to one fast-growing energy market that E.B. calls silver the “energy metal.”

We’ll have full details on that for you tomorrow. So stay tuned.

Meantime, check out master trader Jeff Clark’s new presentation on how to supercharge your gains…

As we mentioned above, the gains in gold and silver are just getting started.

But when it comes to gold, our master trader Jeff Clark believes you could be missing out on serious gains if you’re just buying and holding.

He recently uncovered a way to earn up to 10x bigger gains in the gold market, in a fraction of the time. And it doesn’t matter what happens to gold along the way.

He released a special presentation with all the details. Watch it right here.