Welcome to your Friday mailbag edition of The Daily Cut.

Each week, your fellow readers send their most pressing questions to our team of experts here at Legacy Research.

And every Friday, we showcase their responses.

Coming up today, master trader Jeff Clark shows how you can limit your risk as a trader.

And colleague and former hedge fund manager Teeka Tiwari reveals why this year’s stock market plunge is temporary… and why the “secular” bull market still has a long way to run.

First up, Nomi Prins shows why the Federal Reserve is in a tight corner.

Regular readers will know Nomi as the bestselling author, investigative journalist, and former Wall Street investment banker who’s spent the last two decades blowing the whistle on the unethical practices of the elites there.

Since quitting investment banking, she’s been on a mission to help ordinary folks beat Wall Street at its own game… and build lasting wealth in the markets.

And today, one Nomi reader has a question about the Fed’s balance sheet.

The balance sheet reflects how much stimulus the central bank has done by way of quantitative easing or QE.

This pushes up bond prices and pushes down yields… which move in the opposite direction.

As a result of these purchases, the size of the Fed’s balance sheet more than doubled from about $4 trillion before to the pandemic to nearly $9 trillion at the start of 2022. And it hovers around $8.8 trillion, currently.

And Nomi reader Edward C. wants to know how the Fed can unwind all this stimulus…

Reader question: You’ve shared how the Fed has added trillions of dollars to its balance sheet, and that this has created a difference between the stock market and the real economy.

Could the Fed take steps to reduce its balance sheet? If yes, what would those steps be? What would be the economic impact on the U.S. economy?

Nomi’s response: Hi Edward. Thank you so much for participating in our Elite membership program.

I’m honored by your trust in me and my team. And I’m committed to helping you understand the markets and invest profitably over the long term.

As for the Fed, it’s taken only tiny steps to reduce the size of its balance sheet. Right now, that balance sheet – or “book” – stands at about $8.8 trillion.

The Fed is afraid of shrinking that book too quickly. It doesn’t want to spook the markets even more – after already hitting them with a series of jumbo three-quarter-point interest rates.

There’s a lot of fear in the headlines. Folks are worried the Fed will raise rates to the double-digit levels we saw the early 1980s, when inflation was also in the double-digits.

I don’t think that will happen.

The Fed can flood Wall Street with cash at will. It can cut interest rates, which makes borrowing easier. It can also do as much QE as it wants to make sure bond yields also stay low.

This has the added advantage of keeping government debt costs down… as lower Treasury yields means lower borrowing costs for Uncle Sam.

It’s all part of the Fed’s smoke-and-mirrors management of our finances.

If the Fed was serious about shrinking its book – and reversing its stimulus – it could sell its bonds… rather than just letting them “roll off” its book when they mature.

It won’t do this. Nor will any other central bank. Dumping those bonds back into the markets would create even more uncertainty and turmoil.

If you don’t know him, Jeff’s been a professional trader for more than 30 years. He used to manage money for celebrities, entrepreneurs, and tech moguls in Silicon Valley.

And he specializes in options trading – which allows you to make side bets on stocks with a limited amount of money at risk.

He personally made enough to retire at age 42.

He had one of his best trading years in 2008 during the global financial crisis. And now, he’s aiming to do something similar in this bear market.

On Wednesday, Jeff hosted a special presentation in Las Vegas. He’s spotted a rare 12-day window coming this fall where you could book a decade’s worth of S&P 500 gains… if you’re prepared for it.

Jeff says these 12 days could open the biggest moneymaking opportunity he’s seen since 2008. So go here to catch the replay while you still can.

One reader wants to know about how to use stop loss orders to limit his risk on his options trades. Stop loss orders are instructions you leave with your broker to sell a stock as soon as it reaches a certain price. Here’s Jeff…

Reader question: Should I have stop loss orders on all my options trades? How long should I wait after getting into a trade before I put a stop loss order on it?

Jeff’s response: That’s a great question, Brian. Stop loss orders are designed to protect a profit or limit a loss.

When trading stocks, it’s important to use stop loss orders to limit your downside risk. That way, one bad trade won’t blow up your account.

But when buying speculative call and put options, it’s different. The most you can lose when buying an option is the premium you spend on it. So, your potential loss is already limited to a fraction of the stock price.

If you exercise proper position sizing… and don’t take on an option trade far larger than is appropriate for your account… you don’t need a stop loss strategy when buying options.

But once an option trade is profitable, it makes sense to set a stop loss price to protect your gains. As a trader, I get the worst feeling watching a profitable trade turn into a loser. Don’t let that happen.

As a rule, once an option position is up 50% or so, I’ll set a stop at my breakeven price. Then I’ll keep raising the stop as the trade continues to move in my favor. This way, I’m ensuring a profitable trade.

Finally, I almost NEVER enter stop loss orders on stocks or options with my broker.

If an options market maker looks at a quote screen and sees thousands of option contracts from my subscribers with stop-loss orders at the same price, and within range of being hit, there’s too much potential for “monkey business”

It’s better to keep your stop loss as a mental note. Watch the position. If the price hits your stop, then enter an order to exit the trade.

We wrap up today with a question for Teeka Tiwari.

He knows all about going against the crowd. He wasn’t afraid of controversy in April 2016 when he first recommended bitcoin. Back then, the world’s first cryptocurrency traded at just $428.

At the time, the mainstream narrative was that bitcoin was a Ponzi scheme… or a currency for criminals and money launderers.

Teeka showed foresight and courage to make that call. And our Palm Beach Letter and Palm Beach Confidential subscribers are sure glad he did.

Now he’s out with another controversial call. Despite all the doom and gloom in the mainstream press, he says the bear market in stocks are “cyclical,” or short term. And it’s in the context of a longer term – or “secular” – bull market.

Reader question: Teeka says we’re in cyclical bear market within a secular bull market, and that now is the time to buy cheap assets for the next run up.

Could he explain his reasoning? He’s been right about so many things, but I’d like to know his rationale for such a bold call.

Teeka’s response: Thanks for your question, Tony. Let’s start by defining secular and cyclical markets.

“Secular” bear markets are long-term downtrends. They generally last between 12 and 20 years.

“Cyclical” bear markets are shorter-term downtrends within secular bull markets. They generally last between 6 and 18 months. Then the longer-term bull trend takes over again.

Bull markets are the same – either secular or cyclical.

But each of those was a cyclical – or short-term – bear market within a larger, long-term bull market. So, they weren’t times to sell out of stocks and move to cash.

I’ve gone into more detail about this for our Palm Beach Letter readers (and they can access that here). But one reason I believe we’re in a secular bull market is because of something called the Golden Ratio.

This happens when the number of people in the 35–49 age bracket grows larger than that of the 20–34 age bracket. And it triggers a secular bull market.

It makes sense when you think about it. Most people in the 35–49 age range are earning a lot more money at their jobs. And they’re spending to support their families. That’s good for the economy.

When the Golden Ratio is in effect, GDP grows faster, corporations make more profits, and the stock market rises faster.

According to Census Bureau projections, the median age of Americans will rise significantly between 2020 and 2050, as older people start to outnumber younger people. 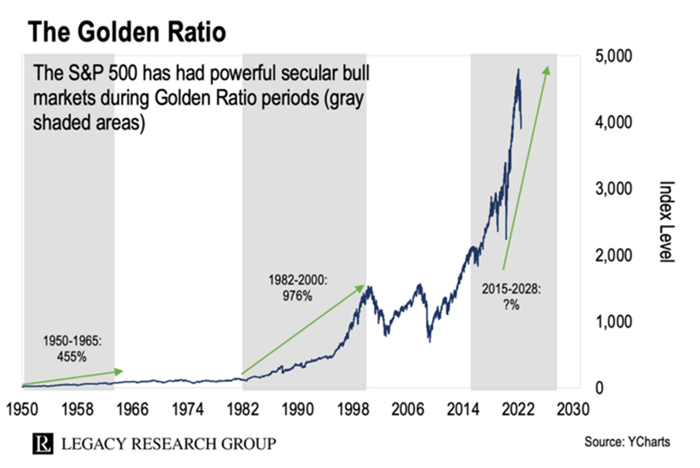 Now we’re back in a Golden Ratio period. And demographic trends show it’s set to last until at least 2028.

Folks in the mainstream are panicking about the sell-off this year. I’m not. These demographic trends point to stock prices going up. The Golden Ratio says this bull market has another six years to run.

I know this market sell-off is painful. But if you want to emerge from this bear market richer, you must view it as a gift.

The key is to pick investments backed by powerful megatrends that can make it through this cyclical bear market.

When you understand that we’re in a cyclical bear market, not a secular one, you’ll see there’s no reason to panic. Instead, you can focus on picking up quality investments at low prices.

If you have a question for anyone on the Legacy team, be sure to send it to [email protected].