At 6.9%, the average rate on a 30-year fixed-rate mortgage is now more than double where it was at the start of the year.

It’s pushed housing affordability to its lowest level since 2006… just before the 2007 housing market collapse.

It’s another market distortion the Fed has caused by keeping interest rates so low for so long… and then jacking them up aggressively.

And it’s bad news if you’re looking to buy your first home.

But as friend of Legacy Research Brad Thomas has been showing his readers, it’s good news for one of his favorite ways to build reliable streams of stock market income.

So today, I’ll pass along one of his top recommendations for how to profit.

But before we dive in… a quick look at how we got here.

In March 2020, the Fed dropped interest rates to zero…

It was an attempt to stimulate the economy in the face of COVID-related lockdowns.

And it was a boon for first-time buyers.

That made buying a first home more affordable.

But the Fed doesn’t only give… It also takes away…

The Fed funds rate is the rate banks lend to each other overnight. And it’s the base rate for the entire economy.

As the Fed funds rate goes up, it pushes up Treasury bond yields. This causes mortgage rates, which are linked to Treasury yields, to rise.

Since the start of the year, the yield on the 10-year Treasury note is up 230 basis points. (A basis point is 1/100th of a percentage point.) 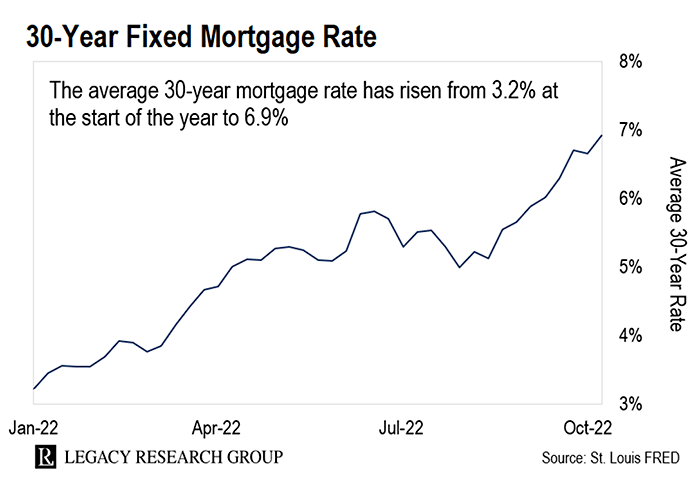 That’s 59% more than you would have paid in January of last year.

And it’s making homes unaffordable for many potential first-time homeowners.

That’s not something to celebrate…

In an ideal world, first-time buyers could afford new homes.

But that’s off the table for a lot of Americans thanks to a bunch of unelected economics PhDs and Wall Street insiders messing around with interest rates.

Fortunately, there’s a way you can turn this situation to your advantage.

It’s especially important if you’re one of the millions of Americans who was hoping to buy your first home… and now can’t because of spiking rates.

REITs trade like regular stocks on a public exchange. And they allow you to collect rent checks from the world’s largest portfolios of income-producing real estate.

That makes them one of the best ways to achieve financial freedom… so long as you don’t expect it to happen overnight. Here’s Brad with more…

To me, financial freedom means your passive income stream is higher than your expenses in retirement. In other words, once your dividend income stream can safely and sustainably support your lifestyle, you’ve reached the promised land.

REITs are my favorite way to build true financial freedom. They’re one of the best sources of rising streams of income. And in my book, financial freedom means having enough passive income to fund your lifestyle.

In 1960, Congress passed a wealth-building law that legalized real REITs. These corporate landlords funnel 90% of their taxable intake to shareholders through regular dividend payments. In return, they don’t have to pay corporate taxes.

So most REITs boast high dividend payouts… while still staying in the “safe yield” range. That’s the best of both worlds.

Brad is one of America’s leading experts in REIT investing…

He writes for Intelligent Income Investor. It’s a research advisory that focuses on REITs and other sources of stock market income.

And a few months ago, he published a book on REITs called The Intelligent REIT Investor.

He also teaches an entry-level course out of this book at New York University.

And as I showed you last week, he used REITs to help turn his finances around after he lost everything as a real estate developer in the 2008 crash.

Brad says that had he invested in strong, stable REITs instead of investing directly in real estate, he could’ve retired by now.

But even all these years later, REITs are helping him rebuild his net worth with safety-oriented returns of up to 15% a year.

First, they tend to do well when Treasury bond yields are rising, like they have been this year.

It looked at the dozen largest one-month increases in 10-year T-note yields from 2000 through the end of March 2018. 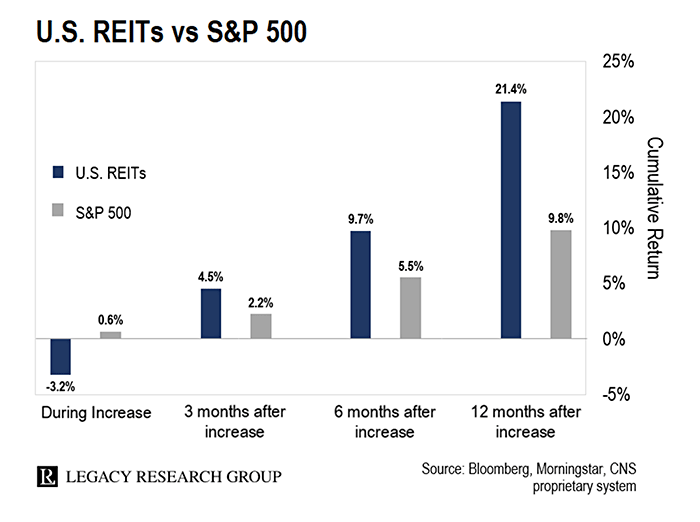 As you can see REITs (dark blue bars) underperformed stocks immediately after sharp yield hikes. But they outperformed over the following 3-, 6- and 12-months periods.

That makes sense when you think about what causes Treasury yields to rise.

Usually, it means the economy is running hot… so rents are high. Or inflation is rising.

And REITs are great ways to hedge against high inflation.

And rising rents are one factor that pushes inflation higher.

What the government calls “shelter costs” carries the biggest weighting – 32% – in the Consumer Price Index (CPI). And it’s mostly made up of rents.

Real estate prices also tend to rise along with inflation.

Real estate is a hard asset. It’s hard to produce more of relative to its existing supply. That’s opposite of the dollar, which the Fed can digitally “print” at virtually no cost and without limit.

Investors naturally want to get out of the dollar and into real estate. This pushes up prices. 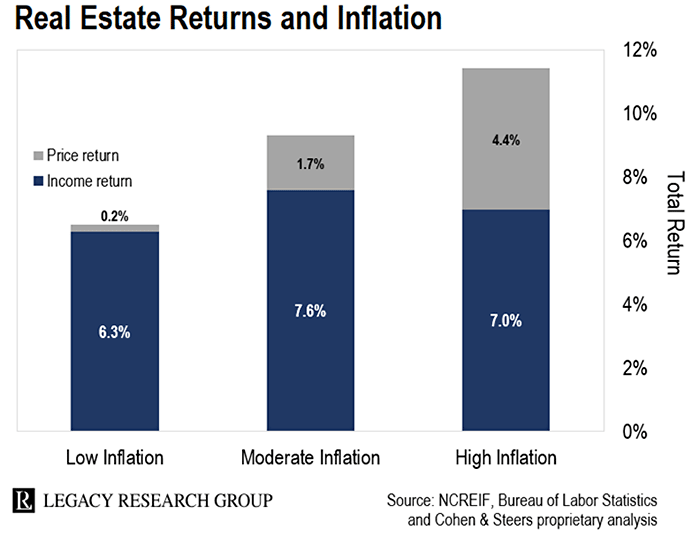 As you can see in this chart from Cohen & Steers, the price return on real estate (gray area of the bars) goes up as inflation rises.

At Intelligent Income Investor, Brad has recommended REITs with yields of 5.3%… 6.1%… and even 8%.

So if you don’t have exposure to REITs in your portfolio, now is a great time to change that.

You can up your general exposure through something like the Schwab U.S. REIT ETF (SCHH).

An even better plan, says Brad, is to focus on apartment REITs…

REITs cover all types of real estate – from office buildings… to malls… to self-storage units.

But right now, Brad is particularly bullish on REITs that own apartments.

Millennials and older Gen Z – folks between the ages of about 25 to 41 – are entering the peak years for first-time home buying.

But unfortunately, the Fed is pricing many of them out of the market.

Essex has about 65,000 units, mostly on the West Coast in Californian cities like Los Angeles, San Diego, San Francisco, San Jose, and Seattle. These are some of the most expansive and supply constrained rental markets in the country. So we don’t have to worry about rent prices falling, even during a recession.

But that’s only one way to create reliable income streams in your portfolio.

Brad is going live on Wednesday, October 19, at 8 p.m. ET, with a strategy he says he wishes he’d known about in 2008. It could pay you up to 50 years of stock income… in less than a minute.

He’ll even share the name and ticker of a recession-proof investment play that could double in the next few years… just for attending.