As Jeff shares below, the GameStop saga shows just how rigged the investing game is against the “little guy.” But Jeff is helping his readers beat Wall Street at its own game. He held a special presentation with all the details on Wednesday.

You can catch the free replay here. Then read on below for more on how to tip the scales in your favor…

Earlier this year, we went through one of the most insane market moves I’ve seen in my 35 years as an investor.

Here it is in one chart… 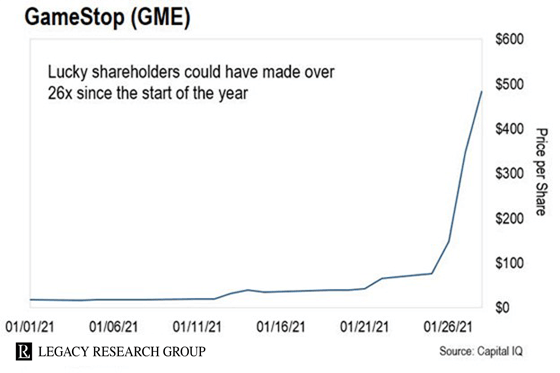 Most of us know the story by now. An army of retail investors got together to push up the shares of struggling video game retailer GameStop (GME).

This pushed up its share price as much as 2,700% over the course of January.

But as I’ll show you today, it’s not the skyrocketing share price that’s so interesting about the GameStop saga. It’s what happened next… as moneyed elites fought back.

It’s more proof the market is rigged against regular investors. And it’s why I’m on a mission to help you balance the scales in your favor. (Stick around for more about that at the end of today’s insight.)

How Wall Street Got a Bloody Nose

GameStop is the video game equivalent of Radio Shack for electronics… or Blockbuster for movie rentals.

The company sells games for game consoles such as the PlayStation and the Xbox. It’s been floundering in a world where gamers can download new games online or buy them on Amazon.com (AMZN).

But in late January, GME jumped 783% over the course of seven trading days.

Here’s how shorting works: These hedge funds had borrowed GameStop shares and sold them, intending to rebuy the shares at a lower price. They’d then return the shares to the lenders, keeping the difference in price as profit.

But shorting can be costly if a stock rises instead of falls. The short-sellers would have to buy back the shares at a higher price than they bought them… and suffer a loss.

With GME, Main Street traders got word of these hedge funds’ shorts… and coordinated using a forum called WallStreetBets on the social media platform Reddit. They figured out that if enough of them bought GME, they could raise its price and “squeeze” the hedge funds out of their positions.

That’s exactly what happened. This hurt several hedge funds that were short GME stock. One fund, Citron Research, said it lost 100% on its short position in GameStop. Another, Melvin Capital, needed a nearly $3 billion capital injection to cover its losses.

Down the Rabbit Hole

The GameStop saga shows that regular investors are joining forces. They’re sharing investment ideas and beating hedge funds at their own game.

But the rabbit hole goes down even further…

And what happened next is hard to believe.

There was so much activity around GameStop that Robinhood could no longer meet its regulatory capital requirements. It had to raise private capital to shore up its balance sheet and avoid getting into trouble.

It drew down on credit lines of $500-600 million. It also raised more than $1 billion in emergency funding… just hours after saying it had no liquidity problem.

Days later, it raised another $2.4 billion from its shareholders. That’s $3.4 billion in less than a week. For perspective, Robinhood had raised just $2.1 billion from its founding in 2013 until its Series G round closed last September.

Then Robinhood took a more drastic measure. To stop its large capital requirements from exploding even higher, it suspended trading on GME.

Robinhood even started selling its users’ positions in GME. Many traders using Robinhood reported having their shares sold without their permission.

As of February 5, Robinhood has lifted its trading restrictions on GameStop. But the damage is already done. Retail investors lost more than $1 billion in profits as a result of these restrictions.

Robinhood users have been fleeing the app in droves. And they’ve been vocal about it.

Nearly 100,000 one-star ratings for the app appeared on the Google Play app store in the hours following Robinhood’s shenanigans.

But then Google began removing the negative reviews. And Robinhood was back at a four-star rating.

It’s insane… except when you consider that some of the most powerful venture capital firms in Silicon Valley back Robinhood.

One is CapitalG, formerly known as Google Capital. GV – aka Google Ventures – is another.

So Google has a financial interest in Robinhood’s success. By my calculations, its stake in Robinhood will be worth more than $1 billion on a successful initial public offering (IPO).

Robinhood had been planning to go public this spring. Now its investors – who just had to pony up $3.4 billion to help it evade its liquidity crisis – will insist on an IPO in the coming months to get their money back… quickly.

Steer well clear of this IPO. I predict that Robinhood and its backers will dump shares on regular investors at an inflated valuation. They’ll take billions of dollars in profits off the table and leave IPO investors holding the bag.

Steer clear of the app, too…

It routes its customers’ orders through hedge funds for execution.

The hedge funds then front-run those orders by buying shares at a lower price and selling them to Robinhood’s customers at a higher price.

That’s right… Robinbood “sells” its order book for a profit.

And if you want a mobile-first stock-trading app, Webull and Moomoo are two suggestions.

As a private investor in early stage tech deals… with a network of contacts in Silicon Valley… I’ve seen this kind of situation play out many times.

For far too long, institutional investors, venture capitalists, and private equity firms have taken all the best profits and left retail investors with the scraps.

And the GameStop saga shows that the moment regular investors band together and start to get ahead… Wall Street cries foul.

Now folks are finally waking up to this fact.

And I want to help them beat Wall Street at its own game.

So far, I’ve had great success.

At my Exponential Tech Investor advisory, where I focus on small-cap tech stocks, there are 10 triple-digit winners in the model portfolio.

And I’ve given paid-up subscribers of my trading service, Early Stage Trader, the chance at returns of more than 100% on three biotech stocks… including one that’s up over 432%.

But my mission to rebalance the scales isn’t finished. That’s why I’m so excited about what I have to say next…

I hosted an event called Investment Accelerator on Wednesday night. And I shared one of the most important predictions of my career…

Not only that… I also revealed an investment opportunity so big, it could put you on the path to sharing $1 billion of tech stock profits.

It’s was a jam-packed night. So, if you didn’t get a chance to tune in on Wednesday, be sure to watch the free replay here.