Welcome to our weekly mailbag edition of The Daily Cut.

And Jason Bodner, who heads up our Palm Beach Trader advisory, reveals what his ace stock-picking system says about the chances of a market sell-off.

But first, I (Chris Lowe) am extending an invitation for you. I want to see if you have what it takes to be our next investment guru.

Someone who can rub shoulders with Teeka Tiwari, Jeff Brown, or Doug Casey. Someone who, after latching onto a big trend, researches everything there is to know about it. Someone who makes sure friends, family, and colleagues know about it, too.

Right now, you may be working on Wall Street or in Silicon Valley. You may be disillusioned with the way the firm you work for treats its customers… its clients… even its staff.

Or maybe you’ve read our research and wondered why we haven’t covered the ideas you’re thinking about.

If any of what I just said rings true for you, my colleagues and I want to hear from you.

You should satisfy the following criteria:

If you’re the right candidate… with the right idea… this is your chance to join the Legacy team.

It won’t be easy. There will be a multistage application process. You’ll sit for analytical and writing tests… pitch ideas… and attend several interviews with our team.

But if you’re up for the challenge, here’s the first step…

Describe in no more than 1,000 words your best investment idea. Also, tell us about a specific way to profit from it. Include this with a resume and a cover letter.

Send this all to [email protected]. If we believe you have the potential to join our team, we’ll be in touch.

Now, let’s dive into the questions from your fellow readers.

First up, we turn to Jason at our Palm Beach Trader advisory.

As regular readers know, Jason was one of the few guys on Wall Street authorized to make trades worth $1 billion… and up. He now helps his subscribers profit in the stock market using a strategy he developed after he quit his job on Wall Street.

Jason’s “Big Money Index” (BMI) is key to this winning strategy. Think of it as an early detection system. It reveals when unusually high levels of institutional buying are pushing quality stocks higher.

Reader question: Can you update us on what your BMI shows about today’s stock market? Is it still overbought, in the midst of selling, or nearing oversold? I find it interesting and valuable to receive the information while the market is changing.

Jason’s response: I get a lot of questions about the Big Money Index. It tracks big-money buying in the stock market.

I use it to predict where the stock market – as measured by the S&P 500 – is headed.

In December 2020, the BMI (purple line on the chart below) signaled that the S&P 500 would peak around January 19. That peak happened on January 25… more or less on time. But we got only a brief pullback.

You see, the GameStop (GME) and AMC (AMC) short-seller attacks kicked off the pullback.

But when we see a big intervention in markets, things change fast. By “intervention,” I mean brokers such as Robinhood and Interactive Brokers stopping trading on these stocks.

That helped calm big-money investors. And instead of the pullback I saw coming, the big-money buyers showed up in force. They bought the dip. And they’ve been showing up ever since. 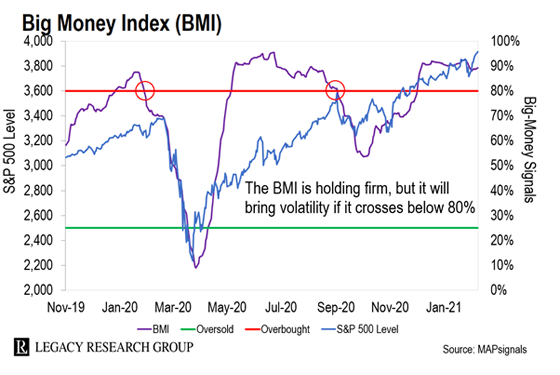 As you can see, the BMI pulled back a touch. But we’re not out of the woods.

As long as the BMI is above 80% (red horizontal line on the chart), the stock market remains overbought. But it can’t stay that way forever. And the red circles on the chart show that when the BMI drops below 80%, the S&P 500 (blue line) falls, too.

I’ve told my subscribers to buckle up and get ready for more volatility ahead.

As I wrote to you about in more detail in yesterday’s dispatch, Jeff is a Silicon Valley insider and early-stage tech investor.

And the recommendations across his model portfolios are on fire.

Of the 31 open recommendations at our flagship tech-investing advisory, The Near Future Report, Jeff has delivered 10 triple-digit gainers… and 19 double-digit gainers.

And at Early Stage Trader, Jeff’s readers have had a chance at returns of more than 100% on three biotech stocks… including one that’s up over 432%. It’s Jeff’s trading service that delivers fast gains from small tech stocks.

That’s why, if you haven’t already, I urge you to catch the free replay of his Accelerated Investor event here.

He outlined five tech-investment opportunities he believes can 10x your money over the next five years.

He also opened up an opportunity to join a top-tier group of investors for the chance to share in a potential $1 billion in tech profits.

After you’ve caught up… read on below for Jeff’s take on one of the trading platforms that “intervened” in the GameStop saga – Robinhood.

Reader question: I’ve been trading a little over a year now on Robinhood. I recently read a note from Jeff Brown on what they did and why. Now I want to pull all my investments out.

Can you recommend another brokerage you believe is more trustworthy?

Jeff’s response: Thanks for your question, Conrad. Like you, I don’t much care for Robinhood – aka “Robbing the Neighborhood.” It all comes down to Robinhood’s dark secret.

Robinhood routes its customers’ orders through hedge funds for execution. The hedge funds then front-run those orders by buying shares at a lower price and selling them to Robinhood’s customers at a higher price. That’s right… Robinhood “sells” its order book for a profit.

This isn’t illegal. But Robinhood was never forthcoming about how it made money. Its indiscretion got the company into trouble with the Securities and Exchange Commission (SEC) and resulted in a recent settlement.

The difference in execution price may be just pennies a share, or sometimes less than a penny. Some investors might be fine with that. But others want to know they’re getting the best execution on their trades as possible.

My mission is to “balance the scales” in favor of regular investors like you.

But Robinhood’s entire business model relies on helping institutional guys profit at your expense. Steering clear of Robinhood is a blessing in disguise.

Alternatives include TD Ameritrade, Fidelity, Charles Schwab, E-Trade, and others.

If you want a mobile-first stock-trading app, Webull and Moomoo are two suggestions.

Setting up an account with another brokerage is an easy process and takes only a few minutes.

That’s all for this week’s mailbag edition.

Remember, if you’ve got what it takes to join the “brain trust” of Legacy investment experts, get in touch at [email protected].

And if you have a question for anyone on the Legacy team, send it to [email protected].