The last seven months have been brutal for crypto investors…

Bitcoin (BTC) soared 685% during the pandemic to an all-time high last November.

And the world’s second-most valuable crypto, ether (ETH), is down 78% since its post-pandemic high.

On top of all that, well-known pundits and investors have been claiming the crypto megatrend is over.

This has left a lot of our readers on the verge of panic selling their cryptos.

Robert A. is a paid-up subscriber of our crypto investing expert, Teeka Tiwari. Here’s how he put it in an email…

I appreciate the consistency in Teeka’s messages. Without his constant advice urging not to sell, I would’ve panicked and sold by now.

But I am still nervous. Every major commentator is signaling the end of crypto, bitcoin in particular. Bill Gates says it’s a sham. Warren Buffett and almost every commentator on CNBC calls crypto a “bubble” that has finally burst.

Robert isn’t alone. Other Legacy readers have expressed similar fears. You may be one of them.

But as you’ll see today, the mainstream view is wrong. The drop in crypto prices isn’t a reason to sell.

Instead, it’s a chance to buy top-quality assets at deep discounts.

Crypto isn’t going away. As Teeka has been showing his readers, we’re still at the “beginning of the beginning” of this market megatrend.

That’s because of three long-term bullish trends still in motion despite all the volatility.

Their funding helped some of the world’s largest internet – and mobile app companies – get off the ground. So VCs have a good track record of creating value.

And last year, VCs invested more than $33 billion into crypto and blockchain startups.

That’s a record for the industry. It’s four times the amount from 2018. 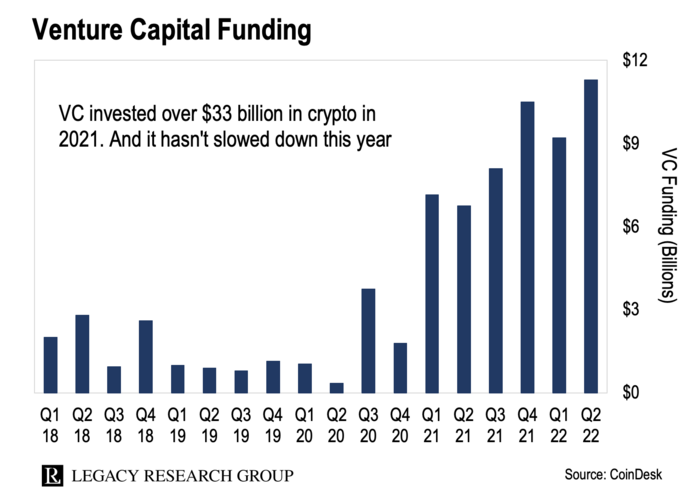 As you can see, VC funding remains strong so far in 2022.

And those numbers don’t include the recent launch of one of the biggest funds in crypto history.

In May, it opened a $4.5 billion crypto fund to take advantage of bargains in this down market.

The firm likens the long-term opportunity in crypto to the “next major computing cycle.” That’s after PCs in the 1980s… the internet in the 1990s… and mobile computing in the early 2000s.

Bullish Trend No. 2 – Adoption is accelerating as institutions get involved…

Teeka has helped readers make fortunes in crypto by focusing on adoption.

His thesis is simple: The more people who use a new technology, the more valuable it becomes.

We’ve seen this with the internet, smartphones, and social media.

The same is true for crypto. The more people who use a network, the more valuable that network’s crypto becomes.

So far, the pace of adoption has been blistering.

This has helped make crypto the fastest-ever asset to reach a $1 trillion market value.

And adoption will keep accelerating as bitcoin moves from the fringes to the mainstream. Teeka…

So it’s a no-brainer to me that, three years from now, way more people will use crypto assets than they do today.

Bullish Trend No. 3 – Bitcoin is a safe haven in an inflationary world…

This third trend relates to bitcoin only. But it’s hugely important given how high U.S.-dollar inflation is now and the importance of bitcoin in the crypto ecosystem.

A lot of folks think of bitcoin as a technology. But it’s also a hard asset like gold, silver, and other commodities.

A hard asset doesn’t have to be physical. It just has to be hard to produce more of relative to its existing supply.

New bitcoin are expensive to mine. And the total supply of bitcoin is limited to 21 million coins. That’s hardwired into its code.

So governments and central banks can’t inflate away its value like they can with the dollar and other fiat currencies.

I know what you’re probably thinking… As inflation has intensified, bitcoin has fallen 70% from its all-time high.

That’s true. Over the short term the crypto’s value has plunged versus the dollar’s.

But a different picture emerges over the long run.

It’s all in the following chart Teeka showed his readers. It’s of how many satoshis (SATS) one U.S. dollar buys.

Satoshis are the smallest unit of bitcoin. There are 100 million SATS per bitcoin. 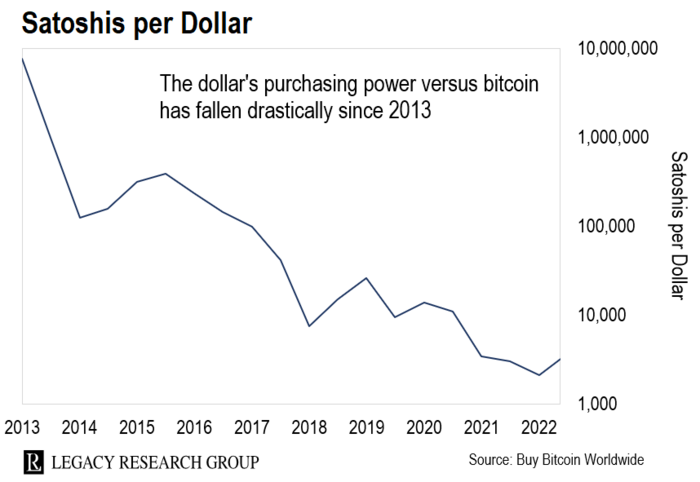 Here’s Teeka on why this chart is so important…

No other asset I know of has risen in value that much over the past decade. And because of bitcoin’s preprogrammed scarcity, I expect this trend to continue for many decades.

That’s why I say – despite its pullback – bitcoin is the best inflation hedge today. Its value will increase. The government will continue printing and devaluing the dollar. It can’t do that with bitcoin.

As I showed you in yesterday’s dispatch, the volatility in crypto right now is par for the course.

In fact, there have been six worse crashes so far in bitcoin’s 13-year history.

And the fundamental drivers behind crypto haven’t changed.

You must stay focused on the big picture. If crypto volatility makes your stomach churn, turn off your computer and go do something else.

The right move now is to hold or buy more crypto. Do not panic sell. You’ll look back on it as one of the worst decisions you ever made.