“Bitcoin will not recover”…

That was the ominous warning financial commentator and bitcoin (BTC) perma-bear Peter Schiff tweeted on Saturday.

It came amid a gruesome crash of the world’s largest cryptocurrency.

That’s the largest loss in the crypto sector’s history.

And Schiff was quick to rub salt in crypto investors’ wounds.

But is he credible? And is this fall a reason to dump your bitcoin?

Plus, I’ll show you what colleague and world-renowned crypto investing expert Teeka Tiwari is urging his readers to do in response to the crash.

Bitcoin’s meltdown has been intense…

That kind of blow is hard to sustain psychologically. Especially if you’ve just started investing in crypto. 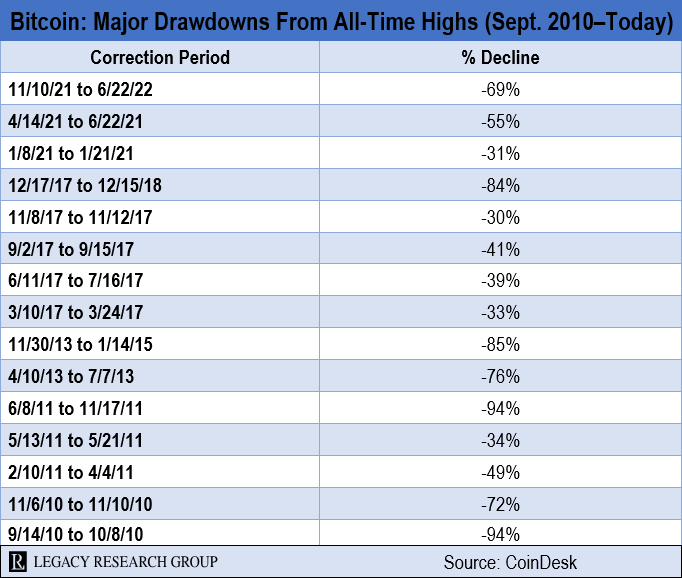 So Schiff’s doom-tweeting will find a receptive audience.

But it’s critical you don’t fall for the bearish narrative taking shape on social media and in the mainstream press.

The worst thing you can do now is sell out of your crypto along with the crowd.

First, he has a financial incentive to run down bitcoin.

Second, his crypto advice doesn’t have much credibility.

One of the first times he told his Twitter followers to avoid bitcoin was when it was trading for $700 in November 2013.

Third, bitcoin has always been volatile.

As Teeka put it in these pages last July…

I’ve said for years that volatility is the price you must be willing to pay for life-changing gains in crypto. You won’t see these huge up cycles without some huge down cycles, too.

And folks who’ve paid that price… and ridden out the volatility… have made epic gains.

But every time, it’s gone on to new highs.

As you can see, bitcoin has had 14 major corrections before. Each time, it’s returned to its previous high – and gone on to a new one. If it follows this pattern to return to its November highs, you’ll be up 242% if you buy in now.

This is true of investing in the stock market, too…

It’s not timing the markets that makes you rich. It’s time in the markets.

You can get fabulously wealthy as an investor. But only if you stay the course.

But to realize that wealth, you’d have had to endure a 91% plunge in the dot-com crash. And there were several drawdowns of 40% or more to further challenge your faith along the way.

He invested early in Apple… only to sell early, too.

In 2003, I invested heavily in Apple. I was betting on the widespread adoption of the iPod. Right after, Steve Jobs canceled 55 million stock options. This sparked fears that the company’s founder was dumping shares.

Apple shares tanked. But I held on and rode out the storm. The mistake I made was selling far, far too early after they rebounded.

This has caused me more heartache, regret, and self-flagellation than any other financial decision I made. That includes the bad decisions that compelled me to file for personal bankruptcy in 1998. The bankruptcy was less traumatic than leaving tens of millions on the table.

So how should you handle the recent bitcoin crash?

Teeka bought more bitcoin for his personal account when it traded around $28,000.

That doesn’t mean bitcoin can’t go lower from here. It can.

But instead of focusing on day-to-day volatility, Teeka focuses on what drives bitcoin’s price over time – mainstream adoption.

And despite the crash… and Schiff’s warning… the adoption story hasn’t changed.

Teeka covered it in detail in the latest issue of Palm Beach Confidential. (If you’re a subscriber, you can catch up in full here.)

This chart he shared with his readers summed it up well…

It shows the number of digital wallets holding bitcoin – one way to measure adoption.

And as you can see, it’s at a record high.

The most important thing to do now is stay the course…

Then, instead of dwelling on bitcoin’s price, recognize the massive opportunity ahead as the crypto revolution continues. And act on it now.

The worst thing you can do is sell everything thinking you can get in at lower prices. Maybe you can pull it off. But it’s easy only in retrospect.

So just sit tight. And consider buying more now at steep discounts if you can afford it.

If you’ve been following along in these pages, you’ll know the importance of keeping a diversified portfolio.

Teeka recommends you put no more than 10% of your portfolio in bitcoin… and no more than another 2% in smaller cryptos.

That way, even a 69% bitcoin drawdown translates to a loss of just 6.9% of your overall portfolio.

That’s no fun. But it’s not a steep enough plunge to ruin you.

And it lets you hold your position long enough to profit from the next recovery.

More on that in tomorrow’s dispatch.