Chris’ note: Yesterday, I showed you how the S&P 500 is up 40% from its March low. For a lot of folks, that seems crazy. We’re in the middle of a global pandemic… 41 million Americans have lost their jobs… and the economy is sliding into recession.

That’s why today, we’re turning to Jason Bodner for insight. He was one of the only guys on Wall Street authorized to make billion-dollar trades. Now, he heads up our Palm Beach Trader advisory, where he uses algorithms to track big-money buying. I’m talking about buying by some of the richest, smartest investors in the world.

And although the world news is grim right now… Jason says the big-money buyers are piling into stocks. Below he reveals how this buying could continue lifting stocks for another two months…

If you look at the headlines, you probably think the world is going to hell in a handbasket right now.

I can’t blame you.

There’s a raging pandemic… civil unrest across the country… a global economic meltdown… and growing tensions between China and the U.S… to name only a few of the headwinds bearing down on the market.

The outlook seems gloomy. But the U.S. stock market continues to charge higher. The S&P 500 is up 42% since its bear market bottom on March 23.

As regular readers know, I’ve been following the big money for nearly two decades. It includes some of the smartest people on the planet.

When they plunk down billions of dollars, they’re not betting on what’s happening now. They’re betting on what they believe will happen 6 to 12 months from now.

And right now, they’re betting on a big economic turnaround once the pandemic, unrest, and political uncertainty recede.

I know it sounds counterintuitive. It’s easy to look at the negative headlines and feel like the country is going in the wrong direction.

I get it… I’m worried about these things, too. But even during the darkest times, things have a way of getting better.

So when it comes to investing, I take my emotions out of the equation. I look at the hard data instead.

And despite the chaos we see unfolding in front of us, the numbers point to better days ahead…

What the Big Money’s Doing Now

For nearly two decades at prestigious Wall Street firms, I regularly traded more than $1 billion worth of stock for major clients. After I left, I used this experience to create an “unbeatable” stock-picking system that’s highly accurate, comprehensive, and effective.

My system scans nearly 5,500 stocks each day, using algorithms to rank each one for strength.

But it does more than just look at individual stocks. It also looks at the big-money buying and selling in the stock market overall.

And on May 11, I told my Palm Beach Insider readers that it was signaling overbought market conditions. I also told them the rebound would likely still last a while. True to those words, we’re seeing no signs of this rally slowing down…

Take a look at the chart below. It shows big-money buying in exchange-traded funds (ETFs).

The blue shaded area tracks the S&P 500. The green bars indicate big-money buying in ETFs. And the red bars show the big-money selling in ETFs… 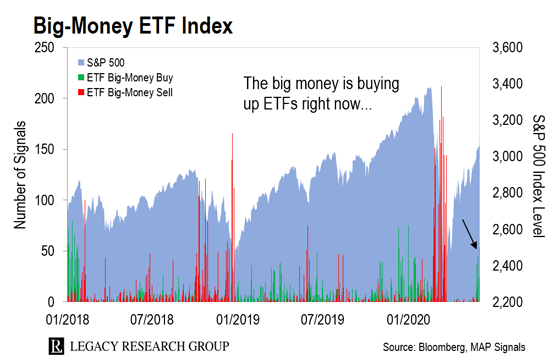 The big boys have been loading up on ETFs again after the sell-off in March. This means we’re likely nearing a peak. But big-money ETF buying can last weeks – especially with the sudden surge in volume we’re seeing.

My data spans the past 30 years. It shows that overbought times like this last, on average, one month.

But they can last as long as three months…

Since the stock market went overbought on May 6, we’ve almost hit that one-month mark. So we could see a short-term pullback tomorrow… or two more months from now.

That will be a great buying opportunity.

I’m not dismissing the problems we’re facing. People are sick of isolation and lockdowns. In some cases, the protests and riots are exacerbating the economic damage the COVID-19 shutdowns caused. The jobless rate is through the roof.

Ultimately, though, the stock market is about the numbers, not emotions. And investors are calculating that the pandemic… and even the civil unrest we’re seeing… aren’t long-term threats.

But here’s the thing… Only a handful of stocks will carry the market higher.

Believe it or not, over the past 100 years, just 4% of stocks have accounted for nearly all the market’s profits each year.

Identifying these outliers can be hugely profitable.

If you’re interested in finding out how my system works, I’ve recorded a special presentation all about it.

You see, I put together a panel of industry experts to stress-test my strategy.

For all the details, watch here now.

Chris’ note: The experts Jason assembled to stress-test his “unbeatable” system include the man who headed up research sales at Bloomberg Tradebook, Craig LoGrande… the $2.5 billion asset manager Forbes called the “King of the Quants,” Louis Navellier… and the former managing director of the Chartered Market Technician Program for Investopedia Academy, Gordon Scott.

As one of them put it during the presentation, Jason’s done “something again that just no one else has been able to do.” Here’s that link again to watch these experts weigh in on this “unbeatable” system.