That’s how much so-called FAAMG stocks lost in value over the second half of last week. 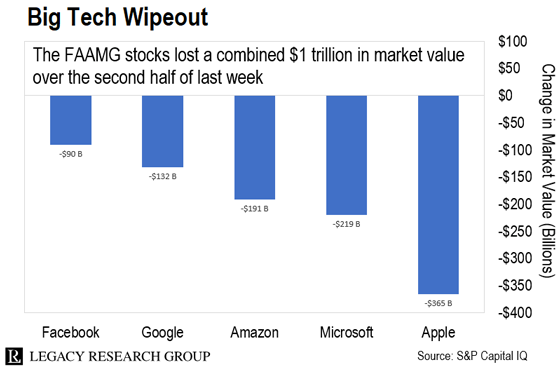 That’s more than the combined value of the bottom 25% of companies in the S&P 500.

And yesterday, shares in the world’s most high-tech automaker, Tesla (TSLA), plunged by 21%. 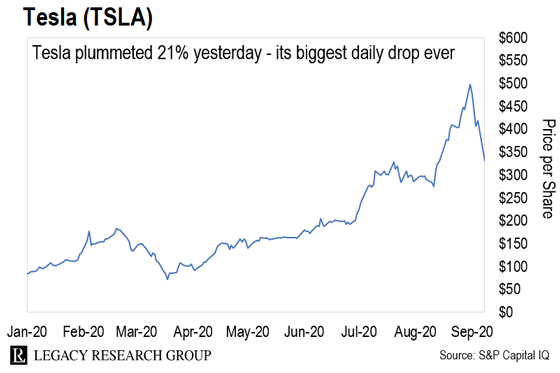 Folks in the mainstream press are drawing comparisons to the dot-com crash. As you may recall, that’s when the tech-heavy Nasdaq index plunged 78% between March 2000 and October 2002.

But our tech expert, Jeff Brown, doesn’t buy the mainstream view that another dot-com-style bust in tech is at hand this time.

As he showed in these pages last week, rather than a meltdown in tech stocks… he sees a huge melt-up on the way.

And as you’ll see today, so much has changed since 1999… the comparison with the dot-com era doesn’t even make sense.

First, tech stocks aren’t as pricey as they were then…

One way to value a company’s stock is to see how much it costs relative to a year’s worth of its earnings.

When valuations get too high, there’s nobody left who wants to buy. That’s when you want to look out below. And in the dot-com boom and bust, valuations got really screwy.

But as you can see from this next chart, that’s not the case today. 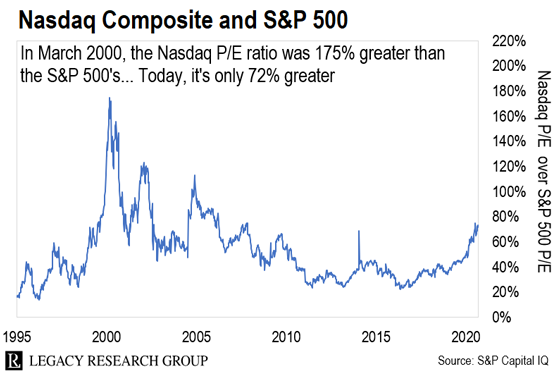 This chart measures the price-to-earnings (P/E) ratio of the Nasdaq versus the S&P 500 – a good proxy for the U.S. stock market.

Today, that valuation gap is less than half as wide.

This next chart looks at year-over-year sales growth for the FAAMGs (green bars) versus the S&P 500 (blue bars) over the past four quarters. 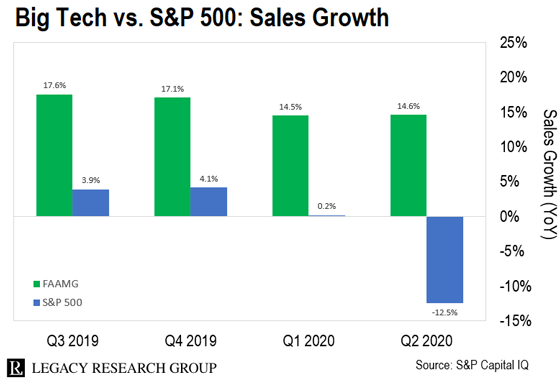 Pay close attention to the last two bars on the right – the second quarter of this year.

The FAAMG stocks grew sales by more than 14% on average. Meanwhile, sales for the 500 companies listed on the S&P 500 fell by an average of more than 12%.

These days, the big tech companies not only have growing sales. They also have profit margins other companies can only dream of. 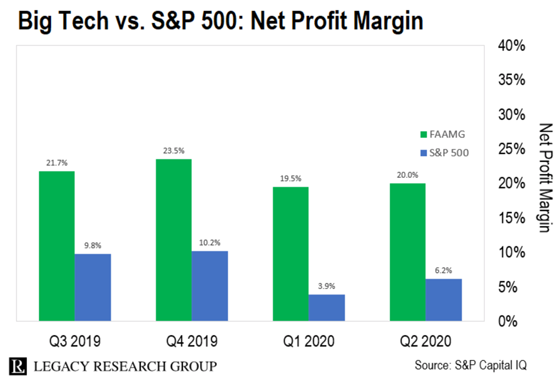 A company’s net profit margin is the percentage of its sales revenue left after it’s deducted all its expenses.

As you can see from the chart above, the FAAMG stocks have net profit margins more than double those of the S&P 500 stocks.

And in the most recent two quarters… the FAAMGs’ average profit margin has been more three times higher than that of the average S&P 500 company.

Finally, tech stocks haven’t taken on too much debt…

The more debt a company has, the lower its profits will be. Any cash it uses to pay down the debt doesn’t flow to the bottom line.

And the FAAMG stocks have lower debt levels than their S&P 500 counterparts. 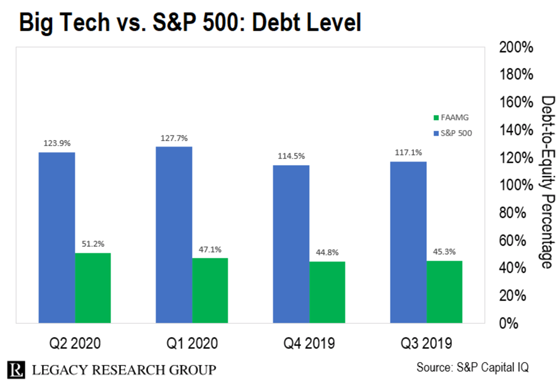 As you can see, the FAAMG stocks have less than half the debt levels of the S&P 500 stocks.

Rewind to the 1990s… when the pressure to grow as fast as possible drove internet companies’ debt to dizzying heights.

For example, by the mid-2000s, Amazon’s push to diversify from books into other areas of e-commerce took its debt-to-equity ratio to 8,404%.

Today, Amazon has a debt-to-equity ratio of just 45%.

Jeff has been warning his readers that many tech stocks have raced to what appear to be crazy valuations.

He also knows the boom in tech won’t last forever. But he says it will be a long run up from here. Jeff…

The dip in tech stocks, in other words, is an opportunity to buy, not sell.

As Jeff has been showing folks in a new video presentation he put together, he’s not worried about tech stocks melting down in the near future.

Instead, he’s been laying out the case for why we’re about to see a huge melt-up in tech stocks. A final, euphoric push of a long bull market that delivers the most explosive gains.

Tomorrow, I’ll have more for you on that… including why even the world’s best stocks have to fall from time to time.

Finally, have you signed up for Teeka’s Set for Life Summit?

If you’re a regular reader, you’ll have noticed a big buzz around Legacy about colleague Teeka Tiwari’s upcoming online summit.

It’s all about what Teeka believes is one of the best speculations in the market today – pre-IPO deals.

As Teeka will reveal tonight… these deals can soar thousands of percent the day they go public.

They’re called Regulation A+ offerings. They’re open to the general public. And in some cases, you can buy into them with minimums of $500-$1,000.

But finding the best deals isn’t easy. That’s why Teeka is going live tonight with his No. 1 pick in the pre-IPO market right now. It’s in biotech, one of the hottest subsectors in tech.

So make sure you clear time in your schedule for that. It kicks off at 8 p.m. ET sharp. As a Daily Cut reader, you can secure your free spot here.