Those are just some of the words folks in the mainstream press are using to describe what’s going on in the pre-IPO market right now.

Pre-IPO (initial public offering) stocks are stocks that have yet to be listed on a public exchange, such as the New York Stock Exchange. Most regular investors don’t have a clue they even exist.

But they’re creating fabulous wealth… at breakneck speed. Bloomberg reports that, this year, pre-IPO stocks are minting one new billionaire a week.

Ahead of the crowd, as usual, was colleague Teeka Tiwari.

And last night, in a live event more than 28,000 people attended, Teeka revealed how regular investors can participate in the 2020 IPO bonanza in a way that has never existed before.

If you didn’t catch Teeka’s event last night, as a Daily Cut reader you can catch the full replay here for free.

In it, Teeka not only pulls back the curtain on how ordinary folks can profit. He also gives you the chance to access his top pre-IPO pick. It’s a tiny company operating in a sector so potentially lucrative, the smart money is pouring billions of dollars in.

Then, below, I (Chris Lowe) will take you through my top three takeaways from last night’s event.

First, it’s important you know a little about Teeka…

I (Chris Lowe) have known Teeka for six years. And I’ve worked closely with him since.

I’ve also had the pleasure of hanging out with him in some far-flung destinations. We attended a cryptocurrency conference in Berlin, Germany… and one of the world’s biggest tech conferences in Lisbon, Portugal. We also traveled to Bermuda for the first annual Legacy Investment Summit in 2018.

There are two things to know about Teeka…

He works tirelessly for his subscribers. And he cares deeply about helping them really move the needle on their wealth.

Take some of the gains he’s given them the chance to pick up in 2020. For many investors – with the coronavirus pandemic, an economic recession, and whipsawing markets – it’s been a particularly tough year to navigate.

But Teeka’s subscribers have had the chance to make double-… and even triple-… digit gains. Teeka…

Subscribers of my flagship Palm Beach Letter advisory have seen year-to-date gains of 87%. That’s 11 times more than the S&P 500. And when the market crashed earlier this year, I recommended three gold mining stocks. They’re are up an average 75% since then.

No one has a perfect track record. But on balance, Teeka’s been delivering on his goal to make sure his subscribers achieve worry-free financial lives.

So when Teeka says one of the most exciting opportunities on his radar right now is in the pre-IPO market… it pays to listen. And his event last night was a master class on pre-IPO investing.

Three things stood out above all else for me…

First, pre-IPO deals are no longer for just the “One Percent”…

Typically, pre-IPO deals are the playground of billionaires and ultra-connected insiders.

But now, that’s all changed.

During last night’s event, Teeka talked about a former U.S. Marine and three-time Purple Heart recipient. He bought pre-IPO shares and earned what Teeka estimates was a $22 million fortune on one company’s IPO day.

Teeka also mentioned a masseuse named Bonnie. She was able to retire early after she made a gain of 1,500,000% on pre-IPO shares.

These are not the kind of folks you typically associate with pre-IPO deals.

But as Teeka made clear, ordinary investors are now able to participate in these markets. It’s due to a rule change by U.S. stock market regulator the Securities and Exchange Commission (SEC).

Here he is with more on that…

They’re called Regulation A+ offerings. And they’re open to the general public – not just accredited investors with a net worth of over $1 million. In some cases, you can buy into them with minimums of $500 to $1,000.

So that’s the first thing to grasp: This market was shut off to ordinary investors. Now, for the first time, you can participate with just a small grubstake.

Second, the potential gains are massive…

Longtime readers will be sick of me banging on about just how lucrative pre-IPO deals can be.

But Teeka didn’t call last night’s event the Set for Life Summit for no reason. The kinds of gains on offer could take you from a world of financial stress to financial freedom – in as little as a single day.

That retired Marine Teeka mentioned… he invested in financial technology company nCino (NCNO) before its IPO. 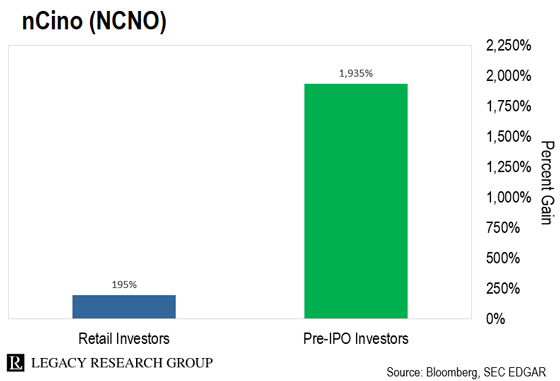 Marshall invested in a pre-IPO round in online auto-trading platform Vroom (VRM). 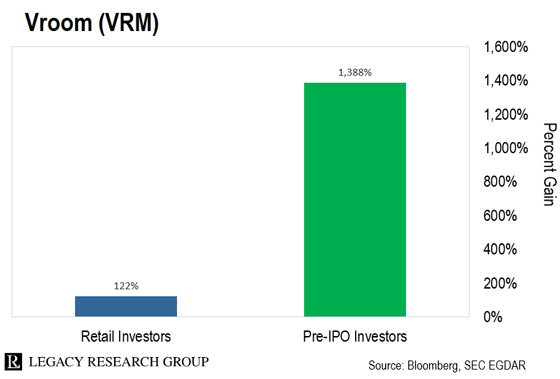 As you can see, folks who invested in public shares in Vroom made 122% on IPO day. But folks like Marshall, who bought pre-IPO shares, made 1,388% on IPO day.

That’s more than 10x what public investors made on the same day. 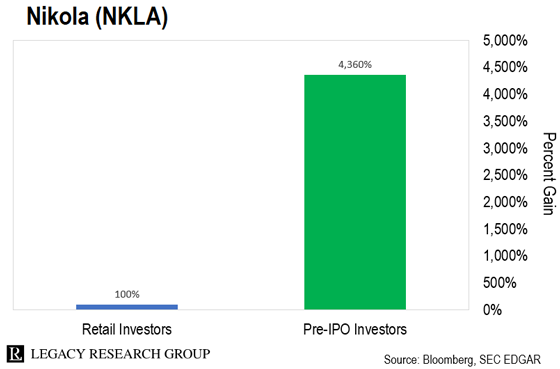 As you can see, investors who bought public shares did well enough. They made 100% on IPO day.

But Trevor and other pre-IPO investors made more than 43x that much. They snagged a 4,360% gain on IPO day.

That’s the second thing to grasp: Crypto-like gains are on offer in the stock market, provided you buy the right companies before they IPO.

Third, one of the best pre-IPO opportunities right now is in biotech…

If you’ve been following along in these pages, this will come as no surprise.

We’ve been banging the drum on the opportunity in gene editing and other areas of biotech for more than two years.

And followers of our tech expert here at Legacy, Jeff Brown, will know it’s one of the tech niches he’s most fired up about.

Even mainstream reporters are starting to pay attention. Forbes recently called biotech the “most profitable sector” in the U.S. today. Here’s Teeka with more…

Based on a number of industry estimates, we could see record-breaking amounts of capital raised for IPOs in October. And biotech IPOs are leading the way. Nearly half of the IPOs so far this year have come from the biotech space.

According to data from PitchBook, venture capitalists (VCs) invested an estimated $5.5 billion in U.S. biotech companies in the second quarter of 2020 alone. That’s the most funds raised in any quarter in the history of the industry.

And private biotech firms raised more in the last three months than their annual totals in every year before 2014.

This is translating to big profits for post-IPO investors… but even bigger profits for folks who get in ahead of IPO day. Teeka again…

But if you had bought shares in those biotech firms when they were still private… your gains would’ve been 3,205%, 3,848%, and 4,151% respectively. That’s the difference between buying at post-IPO and pre-IPO prices.

That was my third takeaway from last night’s event: The best place to hunt for gains right now is in pre-public biotech stocks.

And it certainly doesn’t mean everyone who invests in pre-IPO deals will make millions.

Just like in any market, there’ll be winners and losers.

There are some resources that allow you to search for private deals yourself, such as SeedInvest and MicroVentures. They list dozens of startups raising money from the public. In some cases, you can start with as little as $100.

But you can’t just open these websites, throw a dart, and pick the first company you land on.

To find the companies with the best chances of success, you have to spend hundreds of thousands of dollars on research and thousands of man-hours like Teeka and his team do.

That’s why I urge you to check out Teeka’s presentation on pre-IPO deals. You’ll hear about the top pre-IPO deal on his radar right now (in the biotech space). You’ll also learn more about how this market differs from investing in public stocks and why it’s so lucrative.

Here’s that link again to the replay Teeka and his team have made available for free for Cut readers.