Tech is the gift that keeps on giving… 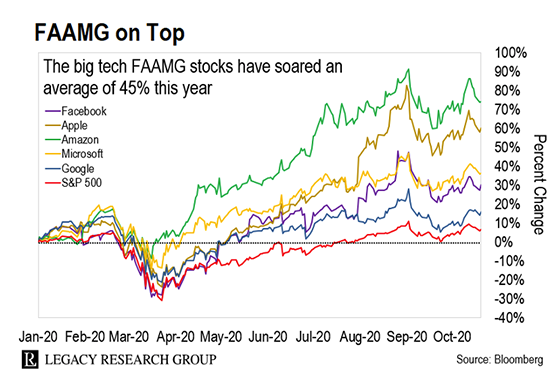 But that’s nothing compared to the gains colleague Jason Bodner has been racking up in tech.

The five top-performing open recommendations in the model portfolio at his Palm Beach Trader advisory are all tech-related. And he’s knocked it clean out of the park with them…

Kudos if you’re a Jason subscriber who acted on his recommendations… especially if you’re up 584% on digital-advertising-software maker The Trade Desk (TTD).

But if you still haven’t pulled the trigger on the world’s best tech stocks, don’t worry. As you’ll see below, they continue to be one of the best places for your money.

We publish 18 investing and trading advisories at Legacy. We also publish 7 daily e-letters – including this one.

It can be hard to keep track of everything… and everyone. And it’s important you know why Jason is so good at what he does.

He spent 20 years on Wall Street, including 12 years at financial services firm Cantor Fitzgerald. His job was handling multibillion-dollar trades for some of the richest investors and financial firms in the world.

He was one of the few guys on Wall Street authorized to handle bets that big. It’s why I like to call him the “billion-dollar trader.”

But after quitting Wall Street five years ago, Jason went out on his own. And he developed a proprietary trading system based on what he learned during his two decades handling giant trades.

Using algorithms, it detects when big-money investors are buying certain stocks… before the rest of Wall Street finds out. As his subscribers know well, this can lead to triple-digit price spikes in these stocks. Jason…

Some people in dark rooms on Wall Street know before these huge trades happen, and they profit from them. It’s just a fact. But if you’re experienced and watch carefully, you can detect signals when the big-money players and the big institutions start to buy.

The massive trades I’ve handled throughout my career taught me how to recognize them before most investors catch on. My readers then get to ride these stocks higher as more big-money investors pile in.

And right now, the big money is piling into tech.

It’s all in the data from Jason’s system…

He isn’t spending his days watching cable news or reading research reports to find out what’s going on… or what the latest market trend is. He’s figuring out the trends on his own.

His system does two things…

First, it ranks 5,500 stocks from strongest to weakest based on fundamentals like sales and earnings, debt, and profit margins.

Then, it tells him when big-money investors start to buy into the top-ranked stocks.

This leaves Jason with the very best stocks in the market…

Take his 20 highest-ranked stocks that saw big money buying at the start of the month.

And their average profit margin is 16%.

That makes it a good stand-in for the U.S. stock market. 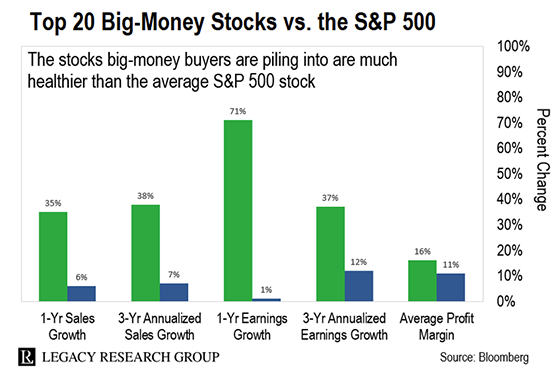 As you can see, Jason’s top stocks smash the average S&P 500 stock on sales growth, earnings growth, and profit margins.

And more than one-third of Jason’s top 20 stocks are in the tech sector.

This shows how strong tech is today. Not only are tech stocks among the strongest stocks in the market in terms of their fundamentals… but also, the big money continues to pile in.

How to play it…

Jason’s top five winners are all above his recommended buy-up-to prices. So they’re not current buy recommendations.

But you can get broad exposure to the tech sector through an exchange-traded fund (ETF) like the Technology Select Sector SPDR Fund (XLK).

And if you’re interested in learning more about how to follow along with Jason’s recommendations at Palm Beach Trader, you can find details here.

Tonight at 8 p.m. ET, our in-house tech expert, Jeff Brown, will reveal a new blueprint for investing in tech.

It’s a way to find small tech companies on their way to becoming the highest-returning tech stocks of tomorrow.

Jeff has spent weeks crisscrossing the country… covering thousands of miles… to capture the fastest-growing technology trend in America today.

And he’ll reveal what he would do right now if he had to start over and build a million-dollar tech portfolio… from scratch… in today’s market… starting with just $1,000.

So if you haven’t already, make sure to secure your free spot here.