What sane investor owns an asset that regularly plunges 50% or more?

U.S. stock market investors have never seen a fall of that magnitude.

That was in 1931, during the Great Depression. It was the worst economic crash in U.S. history.

And a 50% plunge is mild for this asset.

So, it may surprise you that this rollercoaster asset is one of the top recommendations from colleague and former hedge fund manager Teeka Tiwari.

His research shows it will soar by at least 3,240% from here.

I’m talking about the granddaddy of crypto, bitcoin…

It’s one of our favorite speculations here at the Cut.

But to earn that return, you had to endure five plunges of 50% or more. 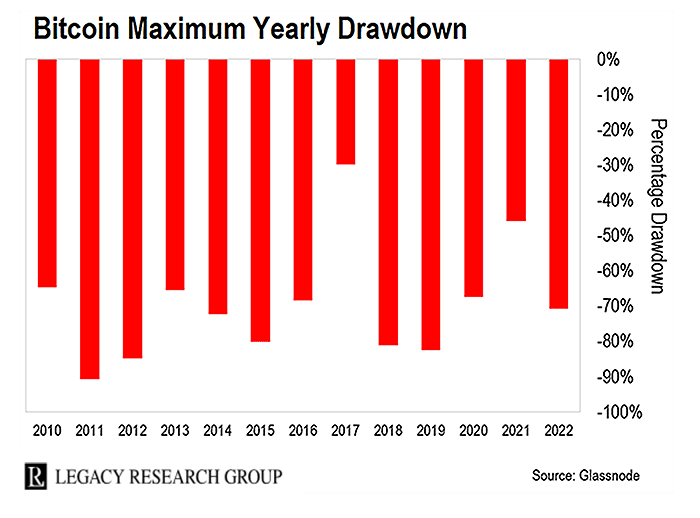 That’s what Teeka means when he says volatility is the “price of admission” you pay for the shot of life-changing gains.

There is no way of capturing those kinds of returns unless you’re willing to ride out these plunges.

Folks who grasp this stand to turn grubstakes into fortunes. Folks who don’t will miss out.

2022 was a horrible year for crypto markets…

It wasn’t just that bitcoin and other cryptos crashed so hard.

We also got a wave of collapses in key crypto projects and businesses.

This cascade of misery began last May. That’s when the TerraUSD (UST) token and its sister coin, Terra (LUNA), imploded in a $40 billion collapse.

Then in June, crypto hedge fund Three Arrows Capital went under because of its exposure to Terra.

And those were just the warm-up acts…

In early November, an even larger disaster hit the crypto market in the shape of Sam Bankman-Fried (“SBF”).

After a report from crypto news site CoinDesk revealed a gaping hole on its balance sheet, his crypto exchange, FTX, hit the wall.

It was one of the largest online crypto exchanges in the world. And SBF was one of crypto’s highest-profile advocates.

But according to the charges against him he’s also the biggest fraudster in crypto history.

Prosecutors claim he’s been running an elaborate fraud at FTX since it launched in 2019. This involved stealing customer deposits by way of a secret software “backdoor.” He then used those deposits to fund risky bets at his crypto trading firm, Alameda Research.

And as Teeka has been warning, there may be more blow-ups at crypto exchanges and lenders in 2023.

So, how can we still be bullish on bitcoin?

As Teeka has been hammering on since the FTX collapse hit the headlines, this isn’t a crypto problem.

If the charges against SBF are even half true, he’ll go down in history as the Bernie Madoff of crypto.

Also, centralized crypto exchanges such as FTX are not crypto.

The blockchain technology behind genuine crypto projects is decentralized. This removes the need for potentially corrupt middlemen in online transactions.

But the exchanges under fire right now don’t run on blockchains. They’re centralized businesses, just like a bank or brokerage.

These exchanges allow crypto users to swap and store their cryptos. But they don’t run on decentralized protocols like bitcoin, Ethereum, and other crypto projects do.

Yes, bad actors were working in these centralized exchanges. But we’ve seen bad actors time and again at centralized Wall Street firms. And in bear markets, they get flushed out.

And flushing out the bad actors is only one reason why Teeka is bullish. He sees three catalysts for a new bitcoin rally.

First, Wall Street institutions are getting involved in crypto…

Take Fidelity. It’s one of the world’s largest asset managers. It has about $4.5 trillion in assets under management.

And last November, it launched a way for investors to invest directly in crypto in their 401(k) plans.

Or look at BlackRock. It manages more than $10 trillion in assets. That makes it the world’s largest asset manager.

Last August, it partnered with publicly traded crypto exchange Coinbase. This will give BlackRock’s institutional clients access to crypto.

Second, the bitcoin halving is on the horizon…

That refers to the halving of supply of newly minted bitcoin, which happens roughly every four years.

In the past, these events have led to a sharp rise in bitcoin’s price. 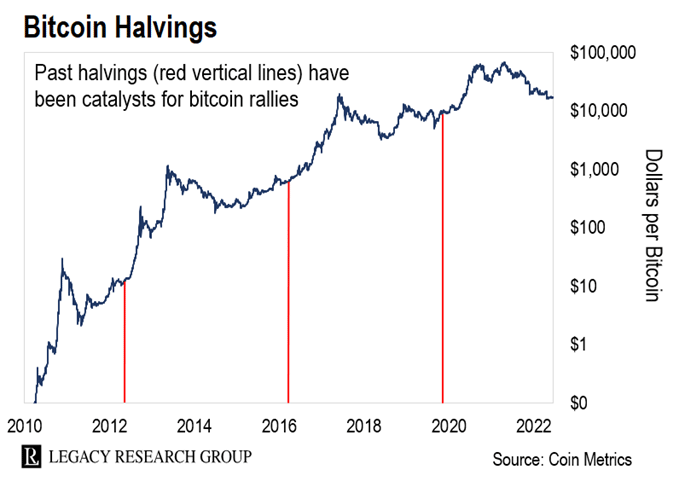 The next bitcoin halving is in 2024. That makes this year a great time to buy bitcoin while it’s so cheap.

If history is any guide, these low prices won’t last for long.

The third catalyst for bitcoin is adoption by young investors…

The deVere Group is one of the world’s largest independent financial advisories. It reports that more than two-thirds of millennials prefer bitcoin over gold.

And that’s a huge deal when you consider the changing demographics of America.

U.S. Census Bureau figures reveal that millennials – folks born between 1981 and 1996 – make up about 22% of the population.

Combined, they’ll eventually account for almost half the workforce.

That means a flood of cash will pour into bitcoin – from Wall Street firms and young investors.

Why will these younger folks buy bitcoin?

For the same reasons why older investors buy gold.

Bitcoin is a hard currency.

So governments and central banks can’t manipulate its supply.

That’s why Teeka sees bitcoin soaring more than 3,000% from here. It will become the gold of a new generation of investors. Teeka again…

Right now, bitcoin’s market cap is about $320 billion. That’s insanely cheap relative to where my research tells me bitcoin is headed.

I know it’s hard to buy something so deeply out of favor. But if Teeka is right, it’s a rare “asymmetric” setup.

Just remember to never bet the farm on a speculative play like bitcoin. And never invest money in these kinds of plays that you can’t afford to lose.