One of the big-picture trends we’ve been tracking for you here at the Cut is the challenge bitcoin and other cryptocurrencies pose to governments’ monopoly over issuing money.

Governments still issue national currencies. But they’ve never had to compete with digital currencies that are decentralized, inflation-proof, censorship resistant, and impervious to the whims of central bankers.

Gold is hovering at a six-year high versus the U.S. dollar. 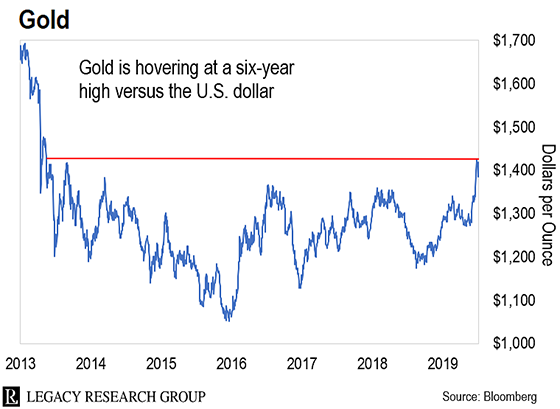 And as we’ve been showing you, folks are using gold as money again in interesting new ways.

And we’ve been urging you to own at least a small amount of both.

But our goal at The Daily Cut isn’t just to help you profit. It’s also to try to help you figure out the big picture.

As Bill would say, “We’re trying to connect the dots.”

That’s why, for today’s dispatch, I reached out to Bill for insight on the challenge cryptos and gold pose to the government-run financial system.

Bill has been writing about our shifting monetary sands for decades. And as you’ll learn below, he believes the shift away from a gold-backed money system in 1971 is the most important economic event of our lifetime.

But are we on the cusp of a new tectonic shift in the money system? What’s really driving folks to give up the dollar for gold and bitcoin?

We’ll turn to questions in a moment. First, let’s make sure we understand what’s been going on.

As a Legacy Research reader, you’re probably already well caught up on the burgeoning crypto economy.

But to give you a rough idea, the bitcoin network has a market value of $200 billion today. That’s up from zero 10 years ago. 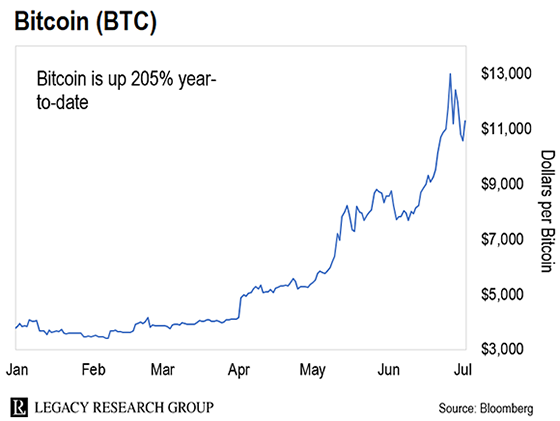 It’s just a taste of what’s to come…

As we’ve been showing you, some of the world’s biggest corporations are getting into the currency game, too.

Last month, Facebook announced it was launching a new “cryptocurrency” called Libra to its 2.6 billion users.

And JPMorgan Chase has created its own version of a cryptocurrency, JPM Coin, to settle transactions between client accounts.

Gold is real money, as Bill says. You could also call it the “anti-dollar.” Gold tends to rise in price when people’s faith in the government currencies falters.

That’s why America’s overseas rivals are plotting to bypass the U.S. dollar as the currency of world trade. Instead, they want to move to a currency system that has gold as its linchpin.

As colleague Nick Giambruno (The Casey Report, Crisis Investing) explained in these pages, China has launched a new oil trading contract. It allows foreign oil producers to get paid in gold for the oil they sell to China.

And as Reuters reports, Malaysian prime minister Mahathir Mohamad wants to see a common trading currency for East Asia that would be pegged to gold.

Last year and this year, we’ve seen record buying of gold by central banks – particularly in China and Russia.

China is the world’s largest holder of U.S. Treasury bonds. It just whittled down its holdings to a two-year low.

So why this rush into bitcoin and gold?

For Bill, it’s just honest money triumphing over the lying type. Here’s how he explained it to me…

Money is just information. It tells you where you stand. Money is a record of your time and what you’ve done with it. It’s also a claim you have on other people’s time and resources.

But money has to be honest. Otherwise, you can’t be sure who did what work… or who has what claim over the time and resources of others. Money has to tell the truth. Or it’s not real money.

Put another way, people are turning to these alternative currencies because the existing ones are liars. Bill again…

The Fed aims to keep the dollar inflating at a rate of 2%. So you lose buying power. Then you have to deal with bank fees. If you take cash from an ATM, you’re charged for it. It’s your money. You worked for it. But to get it back, you have to pay. You also pay when you spend your money with your credit or debit card. It’s the same when you wire money from your bank account.

And if you’re unlucky, your bank may charge you a negative interest rate on your savings. This has already happened in Europe. It means your savings go down each year instead of up.

These costs eat into the amount of your money you can spend to buy things.

It’s why we’re so bullish on bitcoin and gold…

Simply put, these currencies are honest.

So if you haven’t already, consider putting some money toward gold and bitcoin. Unlike phony money, they’re here to stay.

In 1971, we started on this fake dollar standard. That’s when the feds cut off the dollar from gold. And gold is what connected the dollar to the real world of limitations.

Now, we’re seeing the return of honest money. We already know gold is honest. But I think bitcoin – where the supply is limited by an algorithm – is a reaction to the fake dollar standard, too.

I don’t think it will be Facebook’s currency. It’s backed up by a basket of government currencies, which are all in some form of inflation. So this is a crazy innovation to me. Facebook’s Libra coin is the worst currency of the lot.

In the mailbag: “Facebook is in treason to the Constitution”…

Strong words today for Facebook’s coin, Libra, after we put it on your radar last week…

Facebook is in treason to the Constitution and Declaration of Independence. Its coin is meaningless and just muddies the waters for actual cryptocurrencies.

While another isn’t convinced of CBD’s healing benefits, which we wrote about yesterday…

It is a “shotgun” approach to buy and consume it. You can take too much or too little and get no results. You may get lucky and get real relief, or none, or a placebo effect.

Amazon recently announced that it had added 300,000 new jobs since deploying its AI-powered warehouse robots in 2012.

The reason is simple. Robots and AI (artificial intelligence) made Amazon more efficient and productive. That gave the company the opportunity to grow and innovate, which created new jobs.

It’s true that AI will destroy some jobs. But it will also create far more.

But one reader has some doubts…

While Jeff Brown highlights the job growth at Amazon despite automatization, he neglects to measure the job losses caused by the Amazon business model in the rest of the retail environment.

If robots are specifically designed to eliminate human labor, it is difficult to believe that, at the same time, they directly increase employment overall.

Is Facebook’s “cryptocurrency” treasonous, as Stephanie B. says? Is there more to the robot story, as Bernhard E. thinks? Write us at [email protected].