Chris’ note: A “universe of profits”… That’s how renowned speculator Dave Forest describes what’s ahead of us as electric vehicles (EVs) take over from gas guzzlers.

I’ve been spreading the word on the online summit he’s hosting next Wednesday, March 2, at 8 p.m. ET. And you don’t want to miss it. He’ll show you how the boom will play out… and how you can profit. He’ll also reveal details of a $3 EV play that stands to return 49x over the next year.

You can sign up to attend this summit – for free – by following this link. Then read on to learn more from Dave on the profit opportunities this boom will create. As you’ll see, the 3,000+% gains folks have made on Tesla shares over the past three years are just the opening act…

EVs are the biggest moneymaking opportunity of the 21st century.

The explosion coming is unlike anything we’ve seen… 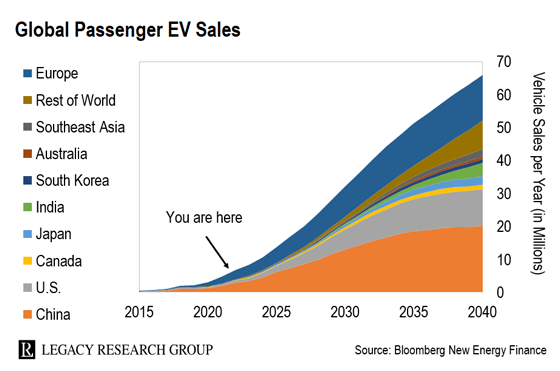 Investors in EV maker Tesla (TSLA) made 3,400% over the last three years. Some people think that kind of EV profit won’t happen again.

But the quadruple-digit gains on Tesla were just the opening act.

Think back to the automobile revolution of the 1920s… Automakers such as Ford (F) cashed in. By 1930, car sales across the U.S. surged from zero to nearly 30 million units.

But automakers were just a small part of the boom. Spin-off businesses gave investors the biggest profits.

Gas stations became a $2 trillion sector from nothing.

And more than 60,000 service stations popped up in just a few years.

Meanwhile, steel and oil took off. Those sectors are worth $100 billion and $7.4 trillion today.

Roadside motels transformed the hospitality industry. That sector is now worth $570 billion.

Historians even credit the auto boom with creating fast food. Drivers wanted quick meals so they could get back on the road. Add that, and you’ve got another $650 billion.

That’s why I’m so excited about the rise of EVs.

Most investors know about EV manufacturers. We’ve all heard of Tesla.

But few know about the universe of profits that EV spin-offs will create.

Put it all together, and it looks more like this…

No other trend hits so many different businesses.

Driving is in the fabric of our society. For a century, we’ve been building our world around cars, highways, and roadside attractions.

Folks made fortunes in the 1920s. The whole continent was up for grabs.

Then in the 1950s, we got the Interstate Highway System. That boom continued until 1992, when construction of the highway network finished.

We haven’t seen a profit universe like this since then.

The rise of the internet in the 1990s was close.

But that wasn’t physical. It didn’t capture so many opportunities the way driving does.

That’s what’s so exciting about the EV revolution…

It affects many of the same industries autos did 100 years ago.

But it goes beyond that. It connects high-tech and real-world infrastructure.

EVs are roving computers. They collect, use, and pass on terabytes of data.

They’ve had the chance to make 385% on companies that mine the metals – such as lithium and nickel – that go into EV batteries. Batteries need these metals to hold a charge.

My readers were also able to grab 2,806% on a company that makes advanced EV charging stations. Other recommendations I made delivered triple-digit gains on the safety tech that keeps EV batteries from exploding.

It’s a profit universe beyond most folks’ wildest dreams.

How to Grab a Slice of the Profits

Are you ready for restaurant chains with EV charging stations?

They’ll have an audience of millions.

How about asphalt that charges your car as you drive?

That’s not science fiction. It’s coming soon to your highways.

One way to profit that I’ve passed along in these pages before is the Global X Lithium & Battery Tech ETF (LIT).

As I mentioned, lithium battery tech is key to the EV revolution. And LIT gives you exposure to a basket of companies involved in mining and refining lithium for EV batteries… as well as companies that make these batteries.

But that’s just one of many ways to profit.

That’s why I’ve put together a special event detailing this universe of profits.

It’s called the EV Superboom Summit. It kicks off Wednesday, March 2, at 8 p.m. ET. And it promises to be one of the most profitable events you’ll attend all year.

At my event, I’ll even give details of this top EV-related play for 2022. It’s free to attend.

So consider adding shares of LIT to your portfolio today. Then make sure to secure your spot for my upcoming EV summit.

I’ll see you there.