Larry Fink is one of the most powerful financiers in America.

During the 2008 financial meltdown, the U.S. Treasury tapped Fink to finance the $30 billion sale of Bear Stearns to JPMorgan (JPM).

Now, he’s at it again… This time in crypto.

And our crypto investing expert, Teeka Tiwari, says it means the end of the raging crypto bear market is in now sight.

Before we dive in, a warm welcome to new readers…

The Daily Cut is a big-ideas e-letter from Legacy Research. That’s the publisher of Teeka, Jeff Brown, and Nomi Prins.

It’s our mission to help you really move the needle on your wealth. One way we do that is by identifying world-changing megatrends early on.

And crypto is a great example…

Teeka began recommending crypto to his subscribers in April 2016 – long before it became mainstream news.

And that’s after the brutal losses crypto investors have endured in the bear market that began last November.

It’s wiped out $2 trillion in wealth…

The crypto “market cap” is the total value of all tradeable cryptocurrencies.

And top coins bitcoin and Ethereum have gotten hammered… 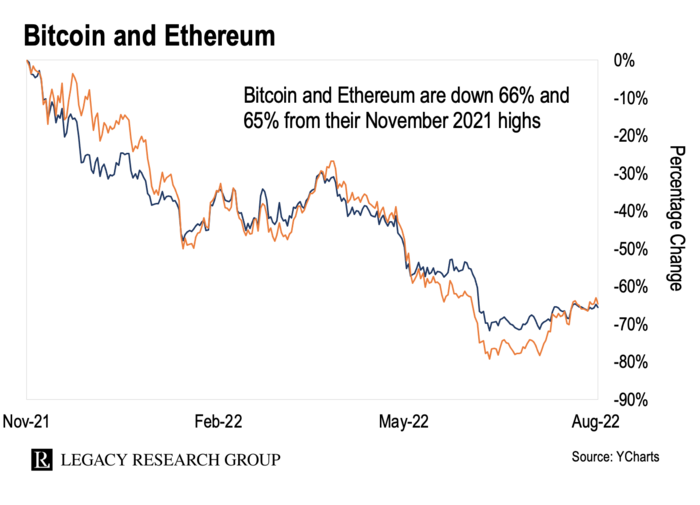 If you’re a crypto investor, this hurts. And if you’re new to crypto, it hurts even more.

That’s why the BlackRock deal is such good news…

Coinbase is the world’s largest publicly traded crypto exchange. And it will now offer trading services to BlackRock clients.

From the start, Teeka has said mainstream adoption would drive crypto prices higher.

That began with individuals. The first adopters were computer programmers, libertarians, and early tech adopters.

Wall Street firms were too afraid to get into something so new. Or they didn’t have the trading and custody services they needed to get involved.

But Teeka predicted that Wall Street greed would eventually kick in… and bring deep-pocketed institutional investors into crypto.

As he told his readers back in November 2020…

Fees are the lifeblood of Wall Street. Estimates show that financial firms rake in about $439 billion per year from fund management fees alone.

This is Wall Street’s gravy train. These firms make it simpler for millions of people to buy financial products. So they charge billions of dollars in fees.

But this gravy is drying up…

Over the last decade, Wall Street profits from managed funds and security products have fallen about 24%. So they’ll soon turn to crypto financial products as new revenue sources.

Fidelity Investments – one of the world’s largest wealth managers – has also brought crypto to 401(k)s.

And there’s been a flurry of bitcoin-related exchange-traded funds (“ETF”). These allow investors exposure to bitcoin in their brokerage accounts.

Now, the biggest player in institutional money is jumping in…

BlackRock says its institutional clients are desperate to get into crypto. So it’s teamed up with Coinbase to give them an access point.

Despite all the volatility in crypto over the past nine months, the biggest institutional investor in the world is entering this market.

I can’t overstate how bullish this is.

The crypto market cap has lost about two-thirds of its value. Crypto lenders Three Arrows Capital, Celsius, and Voyager have blown up. And the SEC – the main U.S. stock market regulator – has launched an investigation into Coinbase. Yet Larry Fink and BlackRock are still coming in.

Fink would never risk his credibility if he wasn’t 100% convinced that bitcoin and crypto assets were here to stay. And he’d never partner with Coinbase if he thought regulators would shut down the exchange.

That doesn’t mean the end of crypto volatility. That’s sure to persist as bitcoin continues toward mainstream adoption.

What it does mean is lot of new institutional buyers entering the crypto market.

And these are major financial players who could swallow the $1 trillion crypto market whole.

That’s why Teeka is doubling down on his bitcoin recommendation…

With news like this, I no longer fear an extended bear market. BTC could drop another 50% from here. But it won’t stay there long.

So if it’s appropriate for you, consider buying more bitcoin now.

We aren’t out of the woods yet. But we can see a way out where before there was nothing but darkness. Reinforcements are coming. And any big bad wolf won’t live long when facing the army of institutional capital gearing up to join our cause.

In April 2019, when everyone else was running scared, he said it was time to put more money into crypto.

He also urged readers to buy bitcoin during the pandemic-induced plunge in March 2020, when the crypto sunk as low as about $5,000.

And Teeka sees bitcoin ultimately heading to $500,000 and beyond. If it does, buying at today’s prices could yield a 21x return.

Just remember to never bet the farm. Teeka recommends you put no more than 10% of your portfolio into bitcoin and another 2% into other crypto.

And start off small.