The commodities rally is picking up steam…

You can see this in the following table… 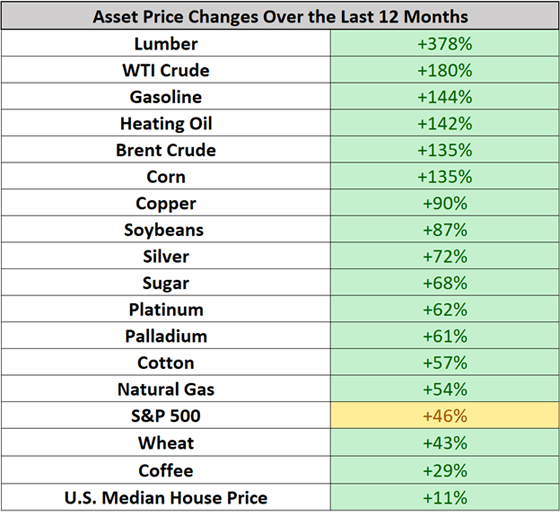 You can’t open a newspaper… or turn on CNBC… without hearing about the recent rally in stocks.

And as I’ll show you today, despite skyrocketing commodities prices over the past year… this rally still has a long way to go.

But the U.S. Bureau of Labor Statistics says consumer price inflation (CPI) is up just 2.6% over the past 12 months.

That doesn’t mean inflation isn’t noticeable elsewhere. As our cofounder Bill Bonner recently put it to readers of his “big picture” advisory, The Bonner-Denning Letter…

Yes, inflation is here. It is showing up all over the place – in commodities, food, housing, and fuel.

Of course, if you don’t eat, live in a house, or go anywhere, you might not even notice. But the rest of us should prepare.

Bill and his Bonner-Denning Letter coauthor, Dan Denning, have been sounding the alarm on inflation for years…

Last year, they put together a special report called After Armageddon. It forecast how the pandemic would change the stock market, the economy, and American society. (If you’re a paid-up Bonner-Denning Letter subscriber, you can access it here.)

The government has no money. It is already running trillion-dollar deficits. All it can do is print money to pay for these bailouts, giveaways, and stimulus efforts. And when the government prints and spends money it doesn’t have, it leads to inflation.

Maybe Bill and Dan have readers in high places. Because now some of the world’s wealthiest investors are starting to worry, too.

Over the weekend, he held the annual shareholder meeting of his $640 billion investing conglomerate, Berkshire Hathaway (BRK.A).

The 90-year-old superinvestor is best known for his sunny optimism about the U.S. economy. But he surprised investors by admitting inflation was becoming an issue for the businesses he controls. As he put it…

Corporate chiefs across America join Buffett and Zell in their concern.

That’s going by new research out of Bank of America (BAC). It shows that the number of uses of the word “inflation” on earnings calls has more than tripled per company since this time last year.

That’s the biggest jump since BofA started tracking this in 2004.

These are perfect conditions for a rise in commodities…

Where vaccine rollouts have been successful, economies are starting to perk up after their yearlong slumbers. This is increasing demand for raw materials.

Then there are COVID-related supply issues across many commodities. Raw materials including lumber, aluminum, and agricultural products are experiencing intense shortages due to supply chain bottlenecks.

In addition to all that, we’ve got record levels of cash stimulus.

This next chart shows the size of President Biden’s stimulus proposals, in inflation-adjusted terms, compared to past government interventions. 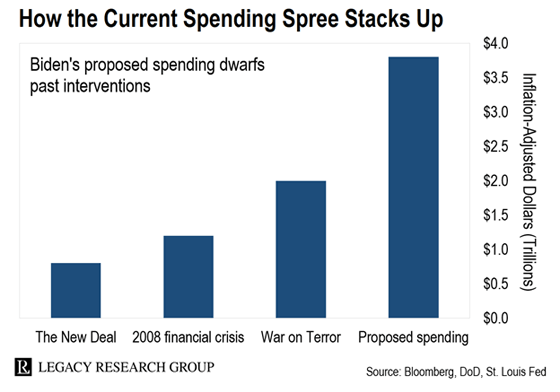 Commodities are a great inflation hedge. Unlike dollars, euros, or yen, governments can’t conjure them up with a few keystrokes.

That makes them great ways to store value as inflation picks up. 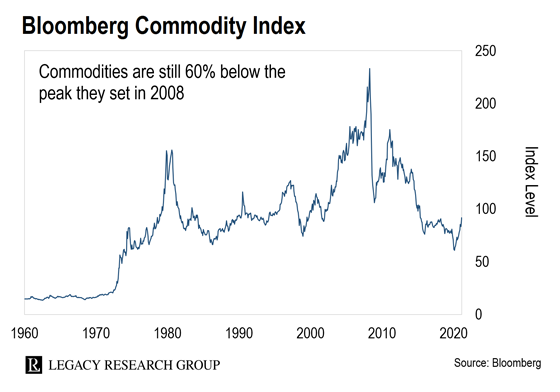 Despite the recent rally, the commodities sector is still down from its peak by nearly two-thirds.

But as I’ve shown you today, commodities have a lot more room to run.

Getting back to the levels we saw after the last crisis would mean a 254% rise from here.

One easy way to get exposure to the commodities sector is through the Invesco DB Commodity Index Tracking Fund (DBC). This exchange-traded fund (ETF) is one of the largest and most popular options for investors looking to get broad-based commodities exposure.

If Bill and Dan are right… and more inflation is coming… this ETF could end up being one of the best performers in your portfolio.