Yesterday, we sounded the alarm on inflation…

Each month, the Bureau of Labor Statistics calculates the change in price of a basket of common consumer goods and services… along with changes in housing, education, and healthcare costs.

Folks in the mainstream press refer to this as the level of inflation.

Another way to think about inflation… and the way we think about it here at the Cut… is a loss in a currency’s buying power.

And when folks no longer trust a currency as a store of value – as is increasingly the case today – they bail on it.

Where do they go instead?

That’s the focus of today’s dispatch.

Get the answer wrong, and your wealth could be decimated. Get it right, and you could grow your wealth more than you ever imagined.

Although most people don’t understand it, inflationary booms can be highly profitable if you know what kind of assets to own.

If you’re reading the Cut for the first time, it means you recently signed up to one of the 19 investment and trading advisories we publish at Legacy Research.

The Daily Cut is the e-letter we created in August 2018 to keep you and your fellow Legacy readers up to date on the team’s biggest moneymaking… and wealth-protection… ideas.

And right now, an inflationary boom fueled by an excess of government and central bank stimulus is front and center on our radar.

As I’ve been showing you, we’re seeing unprecedented stimulus…

President Biden wants to do another $4 trillion in fresh government stimulus.

As I showed you yesterday, that’s three times the size of the stimulus after the 2008 financial crisis.

And it’s nearly five times larger than the spending on New Deal social programs during the Great Depression in the 1930s.

And that’s just on the fiscal, or government-spending, side.

On the monetary side, the Fed is also shattering records. You can see that in this chart of its balance sheet. 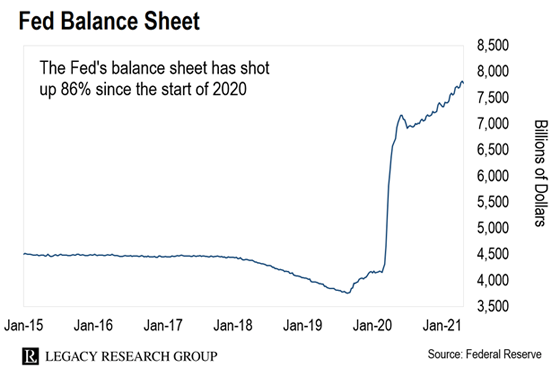 In 2015, the Fed’s balance sheet – a reflection of the new dollars it creates – hit a record $4.5 trillion. This was the result of the digital money-“printing” it did after the 2008 global financial crisis.

As the Fed mopped up some of that stimulus, it got as low as $3.7 trillion.

But last February, stocks plunged on coronavirus fears. And the Fed leapt into action like never before.

It did another $4 trillion in stimulus. This took its balance sheet to a record high of nearly $7.7 trillion.

And it isn’t done yet…

Fed chairman Jerome Powell has pledged to inject another $120 billion a month into the economy. That’s as much as $1.4 trillion a year.

This could cause a 1970s-style inflation…

He’s a veteran commodities investor and speculator who heads up our Strategic Investor advisory.

And in the latest issue (paid-up Strategic Investor folks can catch up in full here), he warned that the next inflationary cycle will be a doozy…

That’s starting to spill over into everyday goods. Last month, consumer products giant Procter & Gamble said it was hiking prices on baby care, feminine care, and adult incontinence products. The size of these hikes will vary. But P&G says they’ll be in the mid-to-high single-digit percents.

By the time the Fed acts, we could see inflation levels we haven’t seen since the 1970s. Maybe even higher.

What does this mean for us as investors?

Folks are rightfully worried about the value of the dollar in the face of all this stimulus.

They’re looking for alternatives… And they’re choosing scarce assets that are reliable stores of value.

Assets governments and their central banks can’t conjure up out of thin air… unlike dollars, euros, or yen.

In short, assets that are scarce will rise against assets in abundant supply.

Signs of the rally in scarcity are plentiful…

As Dave mentioned, commodities are booming.

Meanwhile, copper and aluminium prices are at 10-year highs.

These key industrial metals have both doubled from their lows a year ago.

And the Bloomberg Commodity Index, which tracks prices for 23 commonly traded commodities, is shooting higher. 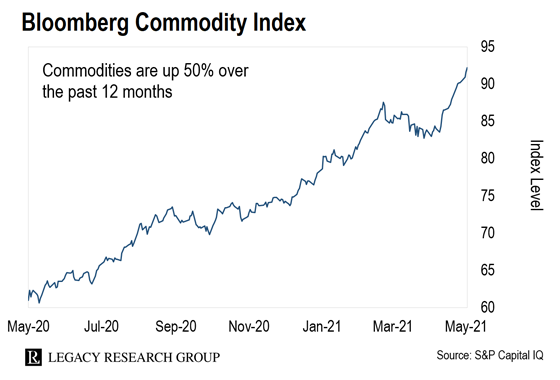 Government-issued fiat currencies have a theoretically infinite supply. But there can never be more than 21 million bitcoins.

And new bitcoins aren’t issued on the whim of governments and central banks.

Bitcoin’s money supply is baked into its code. New bitcoins enter the supply on a predictable schedule. This tapers off over time. 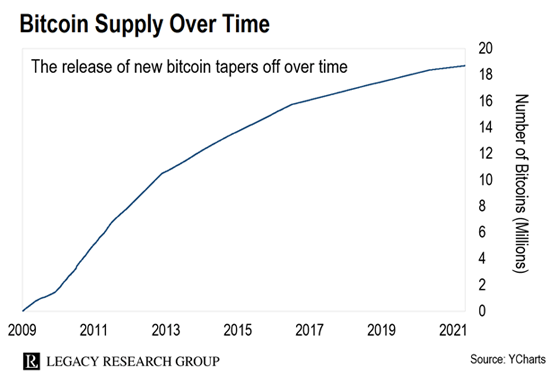 Hard assets are not assets you can stub a toe on… although many have that quality. They’re assets that are difficult to produce relative to existing supply. Traditionally, they’ve included gold, silver, and other commodities.

As Nick explained it…

This is a main reason humans have used gold as money for over 5,000 years. It’s an excellent store of value because it’s hard to produce more of it relative to its existing supply.

But bitcoin is even harder than gold…

That’s controversial. After all, bitcoin is just computer code.

But look at what happens when you include bitcoin in the gold and copper example. Nick again…

Bitcoin’s supply is inflexible and entirely resistant to this dilution effect. No matter how high the bitcoin price goes, miners can’t induce the production of more bitcoins. Because the code that governs new issuance can’t be changed. There is no other asset in existence like this. This is why bitcoin is the hardest asset the world has ever known.

It’s no wonder bitcoin is one of the year’s best-performing assets.

Nick, Teeka, Jeff, Bill, and Dan have also told their readers to brace for higher levels ahead.

But that’s not a reason to panic.

If you want to protect your wealth against the inflation they see coming, buy physical stores of value such as commodities and land.

Also, consider a digital store of value in the form of bitcoin.

These assets are all poised to rocket if inflation fears continue to rise.

And look out for more from me on this important subject in future updates.