They’re the most explosive securities in America…

Before we dive into what’s going on with Tesla… a quick reminder.

In just three hours from now, colleague E.B. Tucker will hold his first special event of the year.

He’ll be revealing the secrets behind what he calls the most explosive securities in America.

They’re not stocks, bonds, funds, options… or even cryptos or private deals.

Tonight’s event is free to attend. So if you’d like to find out how to make these kinds of gains in your portfolio, you won’t want to miss E.B.’s big reveal tonight at 8 p.m. ET.

This event won’t be for everyone. But if you’re open to learning about an unusual type of investment 99% of Americans know nothing about, it will be right up your street.

Now back to the subject of today’s dispatch…

If you’re a Tesla fan, you’ll know what I mean.

Ludicrous mode enables the top-line Model S Tesla sedan to rocket from 0 to 60 mph in under three seconds.

That’s faster than most Ferraris and Lamborghinis. In short, it makes you feel like you’re being launched into orbit.

It’s a feeling Tesla shareholders will be familiar with.

Since the start of 2019, I’ve been showing you why the Tesla bears are wrong. But even I have to pinch myself when I look at that chart.

It’s one of the most epic runs of a major stock I’ve seen in my two decades covering markets.

Investors have made the kind of returns on Tesla in a week that normally take years to make in the stock market. And it’s tempting to try to ride that rocket.

But as you’ll see today, whenever you see a stock go parabolic like this, it comes crashing back to Earth. So, even if you’re bullish on Tesla, now is NOT the time to pile in.

It wasn’t long ago that Tesla was struggling…

In 2018, Musk took flak for smoking a cannabis joint on the Joe Rogan podcast.

The Securities and Exchange Commission (SEC) – the main U.S. stock regulator – also fined him for falsely claiming that he had funding secured to take Tesla private at a 20% premium to where Tesla stock was trading at.

And investors were skeptical that Tesla could consistently meet its production goals for its new mass-market Model 3 sedan.

The company ran into serious production hassles last year at its Fremont, California, production plant… which meant long wait times for customers who had preordered cars.

And things got so bad, financially, for the company that Musk had to lay off 7% of its full-time staff to try to stay in the black.

That’s more than Goldman Sachs, Lockheed Martin, and IBM. It’s also more than 460 of the other 500 giant U.S. corporations listed on the S&P 500.

Tesla is now also worth more than Ford… General Motors… and Honda combined. But it makes 10 million fewer cars than these three rivals together. And it earns a fraction of the net profit that they make.

Kudos to colleague Teeka Tiwari for predicting the rally…

Last September, more than 300 of your fellow readers joined us for our second annual Legacy Investment Summit in Carlsbad, California.

Teeka gave a talk about how to profit from the rapid advances in technology we’re going through. And one of his recommendations was Tesla.

Of course, that was before Tesla’s parabolic move higher. Tesla shares are up 229% since Teeka’s call in Carlsbad.

That hasn’t stopped Tesla’s cultlike following from piling in…

To his detractors, he’s a P.T. Barnum character… a crooked CEO… even a fraud. But for his fans… he’s about the closest thing there is to the Second Coming.

For example, figures from the Robinhood investing app reveal that, on February 4, 15,000 amateur traders bought Tesla stock for the first time at above $800.

If you’re a long-term Tesla bull, it may be tempting to jump in line behind them. But that’s unlikely to work out well.

Sure, shares may keep going vertical for a bit longer. But nothing goes vertical for long. And the fall that comes after these parabolic moves is jolting.

Here’s what happened after the cryptocurrency went parabolic in the fourth quarter of 2017. 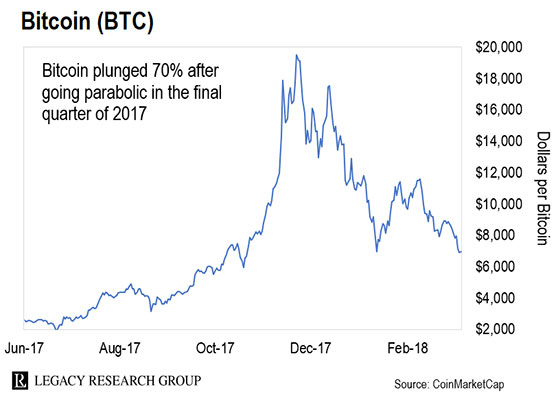 As you can see… bitcoin followed a pattern similar to Tesla shares today. Then, it plunged 70%.

It’s also the effect of one of the most vicious “short squeezes” of all time.

And once you see how these work… you’ll get why it makes more sense to wait for better buying opportunities ahead.

You see, investors don’t just buy stocks on the anticipation that they’ll rise in price. They also bet that stock prices will fall.

This is called short-selling. And it works as follows…

Short-sellers borrow shares from their brokers that they believe will fall in price. Then, they sell those shares at the current market price.

Their aim is to buy the same shares at a lower price in the future and then return them to their brokers.

If the share price falls, they profit from the difference between the proceeds from the short sale and the cost of buying back the shares. This is called short covering.

As I mentioned above, shares hit a low of $179 last June.

Bad news was swirling around the company. And the outlook – at least as most in the mainstream painted it – was bleak. Analysts across the largest investment firms were slashing their price targets for Tesla as a result.

If you believed the bears… and you thought Tesla’s shares were going down… you could have shorted the stock.

You could have borrowed Tesla shares from your broker (for a fee) and sold them for $179. Then, you could have waited for an opportunity to buy them back for less… and pocket the difference.

Instead, they started to climb on good news.

That was a problem if you were short a bunch of Tesla shares. You had to buy back those shares at a higher price. And the higher they went, the more urgent it became to cover your short.

It’s an even more serious problem if you shorted a stock a lot of other investors also shorted.

Because now, you’re going to get caught in a short squeeze.

In a short squeeze… it’s not just a few investors scrambling to buy back shares. There are so many short-sellers scrambling to cover their positions, surge in demand pushes prices even higher.

And the higher prices rise… the more pressing it becomes to cover your shorts and stop taking losses… and the more prices spiral as a result.

Six months ago, investors were borrowing and short-selling about 25% of all Tesla’s shares. That’s enough to kick off the mother of all short squeezes.

And today, short-sellers still control 18% of the company’s shares.

This happened to Volkswagen shares during the financial crisis…

As you may recall, October 2008 was the worst point of the global financial crisis.

And short-sellers started to place bets on a plunge in the share price of the German automaker.

On October 28, 2008, this made Volkswagen the second most valuable company on the planet at the time (after oil major ExxonMobil).

As short-sellers scrambled to buy back shares, the company’s market value hit $343 billion. But as you can see from the chart below of that episode, it didn’t last. 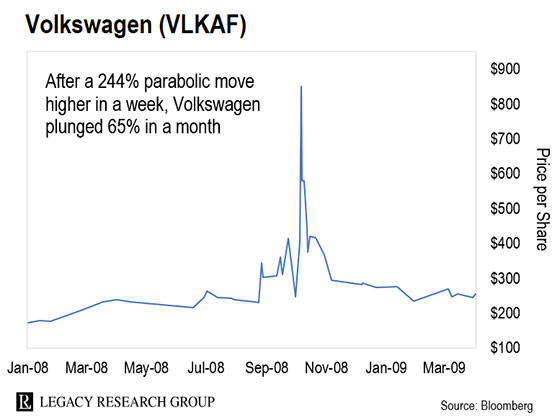 After the short squeeze… and parabolic move higher… Volkswagen plunged 65%.

And unless the laws of financial gravity have been suspended, the current Tesla short squeeze is destined for the same fate.

That’s why now is not the time to buy. Even if – like our tech expert here at Legacy, Jeff Brown – you think that company has a bright future ahead.

Analysts on the Street think it’s a car company. So do most mom-and-pop investors.

But as Jeff has been pounding the table on, Tesla is better understood as an advanced artificial intelligence (AI) company with a mile-long lead on the self-driving trend.

And that’s a big deal if you believe – as he does – that self-driving cars are among the biggest tech trends of the next decade. Jeff…

Every other carmaker buys or builds an engine, a chassis; fills in the rest of the details; then writes software to assist controlling the car.

Tesla does the opposite. It’s designed a software architecture – including AI – and built a car around it. For Tesla, the software comes first. Then the chassis, engine, tires, seats, and so on.

That gives Musk’s firm a huge lead on our self-driving future. Car companies need AI software to pilot self-driving cars. And Tesla has the best self-driving AI capabilities in the world right now.

If Jeff’s right, buying after these parabolic moves break down… and holding for the long term… could be a great way to profit as that future unfolds.