Tesla isn’t the only investment in the world worth watching…

We spilled a lot of ink yesterday on the dizzying ascent of shares in Elon Musk’s electric carmaker, Tesla.

As we told you, the 76% jump in value over the past eight months has been one of the most spectacular run-ups for a major stock I (Chris) have seen in my two decades covering markets.

Tesla has sucked up so much airtime that a new rally in bitcoin has gone completely unnoticed.

But we’re paying attention. And as you’ll see today, it’s shaping up to be a great short-term speculation… whether you’re a true bitcoin believer or not.

As he explained in these pages, he’d just spotted a pattern called a bullish cross in the price chart of bitcoin.

It told him that the latest uptrend in bitcoin was going to kick off a new bull run. 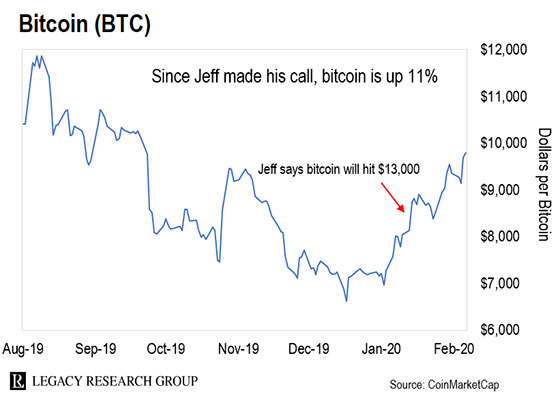 As you can see, bitcoin had been falling since its peak of $13,000 last June.

But finally, bitcoin is a buy again. Since Jeff made his call, bitcoin is up 11%. It’s now at a three-month high.

And the bull run is just getting started. Jeff foresees a 33% gain in a matter of weeks.

If you’re joining us for the first time… welcome aboard!

Our mission at The Daily Cut is to put you ahead of major market trends – early on – so you can profit and protect your wealth.

I (Chris) do that by plugging you into the latest ideas, insights, and recommendations from Doug Casey, Bill Bonner, Teeka Tiwari, Jeff Brown, E.B. Tucker, and the rest of the Legacy Research team.

I also have some of the world’s best traders on speed dial. And one of them is Jeff…

If you don’t know him already, Jeff used to manage money for Silicon Valley’s elite. Now, he heads up the Jeff Clark Trader advisory.

To be clear, Jeff isn’t a bitcoin guy. He doesn’t know what a blockchain is or how to spend a satoshi. His bread and butter is trading stocks based on predictive chart patterns.

And he’s damn good at it.

And Jeff sports an impressive 73% win rate across all of his trading services.

But these patterns don’t work on just stocks. They also have predictive power for bitcoin and other assets.

He sent out a bullish bitcoin alert to his Market Minute readers on February 15, 2019.

He titled it “The Next Big Move for Bitcoin.” And he told readers that the cryptocurrency would rally 16% in a matter of weeks.

This was right after the “Crypto Winter” bear market. And sentiment on bitcoin was still brutal.

But Jeff’s call was right on the nose. Bitcoin gained 281% before its peak last June.

We put this on your radar three weeks ago.

And Jeff believes a 33% gain from here is in the cards.

It’s down to this next chart… 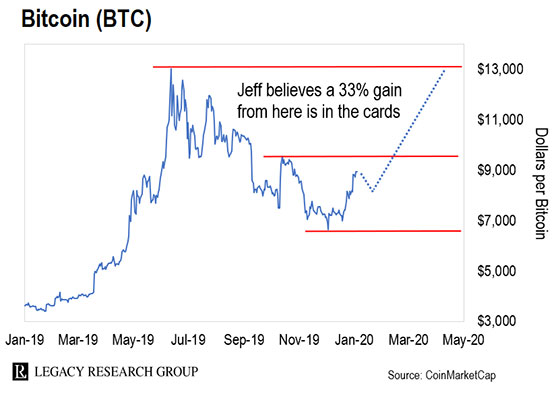 If you’re already familiar with chart analysis, you can read Jeff’s detailed explanation of what it all means here.

In short, Jeff told his subscribers that if bitcoin broke above $9,400 (the middle horizontal red line on the chart), it would keep rallying before it met with “resistance” at $13,000.

That’s the point at which Jeff expects pushback from a growing number of investors willing to sell at that price. (It’s marked by the top horizontal red line on the chart.) 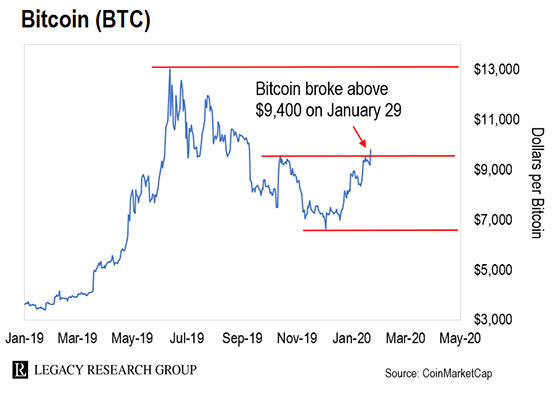 If Jeff is right, that means now is a great time to add bitcoin to your portfolio as a short-term speculation.

And bitcoin isn’t hard to buy…

Teeka Tiwari and the team at Palm Beach Research Group have put together a quick one-page guide.

And as a Daily Cut reader, you can access it for free here.

Just understand that bitcoin is a speculation. It is volatile. As always, keep your position sizes small… and never bet more money than you can afford to lose.

Are you gearing up for short-term gains in bitcoin? Are you riding out all the turbulence and holding on for the long term? Or are you still skeptical of cryptocurrencies? Write us at [email protected].