He’s a professor of neurosurgery at the Johns Hopkins University School of Medicine.

In July, he led a groundbreaking spinal fusion operation… It was the world’s first surgery using augmented reality (AR).

Traditionally, surgeons have to keep an eye on a patient’s body… while looking up at scans of the patient’s bones and tissues on a separate monitor.

But thanks to AR, Witham could see these scans superimposed in his field of vision directly over the patient’s body. This gave him a kind of X-ray vision. 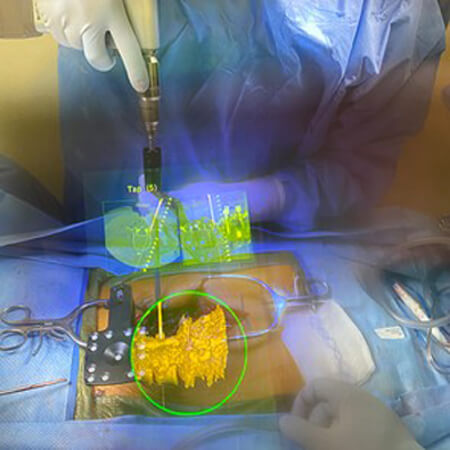 Medical techniques like this were once the stuff of science fiction.

But as I (Chris Lowe) will show you today, they’re now possible in the metaverse.

And this is just the start… The medical metaverse will also include immersive virtual reality (VR) surgical training… and consultations with artificial intelligence (AI) “doctors,” via avatar, in 3D digital worlds.

So if you’re looking to really move the needle on your wealth in 2022, this needs to be on your radar. It’s hard to think of a more powerful and wide-reaching tech trend.

Before we dive in, a quick recap for newer readers…

Instead of just looking at web pages or videos online, you’ll enter a virtual world as an avatar (a digital representation of yourself). And you’ll interact with other people’s avatars there.

You’ll be able to enter metaverse worlds using just your laptop, smartphone, or game console. But VR and AR devices will bring them alive.

Roughly 500 million people are already playing metaverse-like games such as Minecraft and Roblox.

And as I’ve been showing you, they’re not only playing games in these worlds. They’re also hanging out with each other at virtual cinemas and concerts.

Meanwhile, Meta Platforms (MVRS) – the $920 billion social media giant formerly known as Facebook – is rolling out a metaverse world that will include virtual conference rooms and workspaces.

But as significant as those leaps are… the metaverse will transform a lot more than the $173 billion gaming industry, the $62 billion social media industry, and the $5.8 billion virtual conferencing industry.

VR will also play a big role in medicine…

Take the recent study of student orthopedic surgeons at the University of Connecticut.

The trainees practiced surgical procedures, such as placing a pin in a broken bone, in 3D with these headsets. This helped them learn 570% faster than students who didn’t train with VR.

That’s not just a small improvement. It’s a nearly 7x increase in performance – a game-changer, in other words.

It means relatively inexperienced surgeons don’t have to practice in the operating theater, on real patients. Instead, they can train in a virtually identical 3D environment before moving on to humans.

Soon, you’ll even consult with your doctor in the medical metaverse…

The COVID-19 pandemic showed that we can change our habits fast in an emergency.

If you’re like me, you may have had your first Zoom-based doctor’s appointment sometime over the last two years.

Now, companies such as Treatment.com out of Vancouver, Canada, are building a medical metaverse world.

Patients will go there to consult with AI “doctors” that can diagnose minor ailments and send more serious cases to their human counterparts.

This service will sync up with the personalized digital data on each patient, if they consent, from smartwatches and other wearables.

It may sound far-fetched that we’ll see digital doctors…

But already, Google (GOOG) gets more than 1 billion daily searches – about 7% of its total searches – for medical questions. The medical metaverse is the next evolution of that.

If you’re still on the fence about all this, I get it…

I started college in 1994. This was in Dublin, Ireland, where I’m from.

On the first day, someone helping with registration handed me a little slip of paper with a random string of numbers and letters followed by an “@” sign and the name of the university. They told me I could use it in the college’s computer rooms.

It was an email address. But I was totally oblivious…

And I didn’t set foot in a computer room… or send a single email… in my four years in college.

I had no clue what email was… nor much inclination to find out.

I didn’t set up my first account until 1998, after I graduated.

So I get it if you’re struggling with all of this. I really do. Truly breakthrough tech innovations are so unlike anything that came before, they’re always hard to process at first.

But I want you to be honest with yourself…

If the metaverse sounds like wishful thinking – or even hokum – to you… ask yourself what you thought about past tech breakthroughs like the internet and smartphones before they went mainstream.

Did you dismiss them too?

If your answer is yes, you likely missed out on the life-changing gains that were on offer.

That’s the scale of the opportunity ahead…

And it’s why I’m continuing my campaign to get you to pay attention to the metaverse megatrend.

Though for my money, the metaverse will be even bigger, and more profitable, than what’s come before.

You can get started by picking up shares in the Roundhill Ball Metaverse ETF (META).

If you’re new to investing, an ETF (exchange-traded fund) is a fund containing a basket of stocks. It trades on an exchange, just as a regular stock does.

META invests on your behalf in a basket of metaverse stocks.

These include Roblox (RBLX). It’s the company behind one of the most popular gaming worlds. They also include Meta Platforms, which as I mentioned is making a virtual world to socialize and work in.

This ETF also gives you exposure to leading AR companies, such as Snap Inc. (SNAP).

In short, it’s a “one-click” way to get some broad exposure to the metaverse via the stock market.

That makes it a great place for you as you take your first steps as a metaverse investor.