If you followed our call on silver last year, you’ll be glad you did…

Here’s what I (Chris) told readers of our Legacy Inner Circle advisory in the August 10, 2018 dispatch…

Our mission at Inner Circle is to help you profit from the biggest trends shaping the market. Today, we put a new trend on your radar: a looming bull market in silver… and the catalyst that will trigger it.

At the time, silver was unloved and out of favor.

Investor sentiment was so negative that The Vanguard Group – one of the world’s largest fund managers – had just been forced to shutter its flagship precious metals fund.

Here’s what happened next… 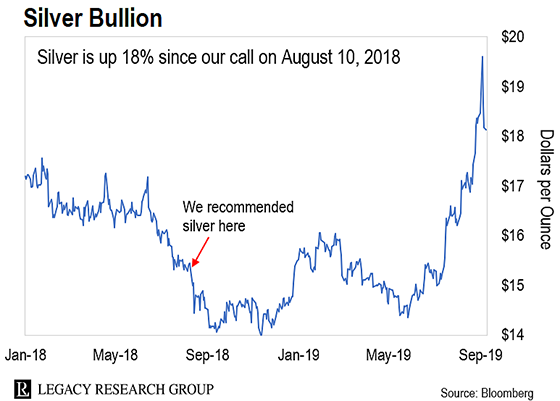 Even after last week’s pullback, silver is up 18% since then. That compares with a gain of just over 4% for our regular stock market stand-in, the S&P 500.

When I want to know what’s going on in a certain market, I reach out to one of my colleagues here at Legacy… and bring you his insights.

And last summer, one of our go-to precious metals investing experts, E.B. Tucker, was turning bullish on silver.

As regular readers know, E.B. heads up our Strategic Investor and Strategic Trader advisories. And when he’s not researching new investing opportunities for his readers, he’s building a fast-growing precious metals “royalty” company. (It finances new mines in return for a cut of profits – or royalty payment – from production.)

Silver was trading at $15.31 an ounce when E.B. turned bullish last year. And E.B. said he wouldn’t be surprised to see the silver price triple from that level.

The catalyst E.B. identified may surprise you…

It has nothing to do with silver’s relationship with gold… or its safe-haven status during runaway inflation.

It has to do with silver’s status as what E.B. calls a new “energy metal.” As he told Legacy Inner Circle readers last summer (paid-up members can catch up in full here)…

There’s a new megatrend at play in the silver market. It’s just that most folks haven’t fully grasped what’s going on yet. And it has to do with a sea change in the way we produce power…

As your readers will probably be aware, clean energy is on the rise. From hydroelectric dams… to wind power… to geothermal power… people are demanding cleaner sources of energy. But one clean energy source in particular is set to surge – solar power.

That means silver is about to get a huge boost as well. It’s a key ingredient in the photovoltaic (PV) cells that allow us to capture and store the energy from the sun.

As E.B. has been telling Casey Research folks, he’s a skeptic of the mainstream view on climate change.

But that doesn’t mean there won’t be more solar power in the future. And a lot of that demand will come out of China.

More than 1 million people die each year in China due to polluted air. Much of it is a result of burning coal for power.

It’s political suicide for the ruling Communist Party of China to let air pollution get even more out of hand. That’s why it’s turning to solar as an alternative…

China is now home to about two-thirds of the world’s solar-production capacity.

Some of China’s new solar facilities are on a giant scale. Take the Tengger Desert Solar Park in north-central China. At 43 square kilometers, it’s the biggest solar power station in the world. This has earned it the nickname the “Great Wall of Solar.”

Tengger has the largest daily peak output of any solar power station – 1,547 megawatts. That’s enough to power about 253,700 homes. And to produce all that power, it needs silver… lots of it.

And demand for solar isn’t growing only in China…

As this next chart shows, the amount of electricity we produce globally with solar is up every year since 2006.

And numbers from research firm GlobalData say it will double by 2025. 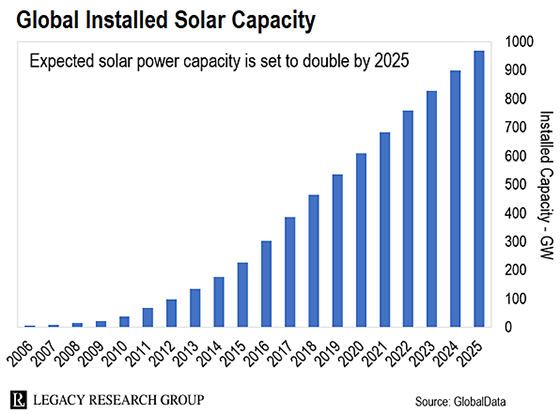 There’s good reason for the surge in solar. Generating power this way is getting more efficient. This is slashing costs. E.B. again…

Commercial use of solar began in the 1950s. That was the advent of the first silicon solar cells. These were used in small electronic devices. Back then, the cost to produce a 1-watt solar cell was about $300.

But technological innovations since then have driven down costs dramatically. Today, a PV cell will set you back only about $1 per watt. And costs are still heading lower. This opens the door for an explosion in large-scale solar power generation.

And silver is hard to replace in solar panels…

It has the highest thermal and electrical conductivity of all metals.

And it’s used to conduct electricity out of PV cells and onto the grid… or into a battery for storage. Solar panels wouldn’t be as efficient without silver.

The average PV cell contains about 0.643 ounces of silver.

That may not sound like much. But generating 1 megawatt (MW) of electricity – enough to power 150 homes – takes about 4,000 solar panels.

So we’re talking almost 2,600 ounces of silver for that much power.

And that’s for just 1 megawatt. But remember, we use about 536 gigawatts (GW) today. And by 2025, GlobalData predicts we’ll reach 969 gigawatts.

E.B. says the best way to profit is to buy silver coins…

As we showed you last week, gold and silver prices are taking a breather.

This will create better buying opportunities ahead.

So first, buy physical silver. Like with gold, silver coins are a good starting point. They’re a real, hold-in-your-hand asset. Mining stocks, on the other hand, represent a share of a company’s future profits.

E.B. asked coin dealer Gainesville Coins to create a page of discounted options for bullion coins as a jumping-off point.

The page was originally only for E.B.’s paid-up readers. But because of gold and silver’s recent moves, he’s making it available to all Legacy readers.

Neither E.B. nor Legacy takes any fees or commissions from Gainesville Coins. It’s purely a service to you and our other readers.

Check it out right here.