Our mission here at The Daily Cut is simple…

And we cover a wide range of themes and strategies…

I’ve also spilled a lot of digital ink over the long-term booms in the legal cannabis and cryptocurrency markets.

So when I see several Legacy analysts singing from the same hymn sheet, I take note…

And right now, I count nine Legacy Research analysts who are bullish on gold.

I’d go so far as to say that no single other investment has so many members of the team on board.

The rally in gold was also a core theme at our second annual Legacy Investment Summit in California last month.

As gold industry insider E.B. Tucker put it during the panel discussion I hosted on gold, he’s looking for gold to take out its $1,900 all-time high before this bull market ends.

You don’t want to miss out…

Natural resource speculator Rick Rule was also with us in California.

Like when he invested in five tiny uranium mining stocks in the late 1990s. At the time, uranium was selling for about $8 a pound. Barely 10 years later, it was selling for $136 a pound. By Rick’s estimation, even the worst of those stocks returned 20-to-1.

So, when Rick makes a big call on gold, we listen.

And as he told the Legacy folks who joined us at the summit, the gold bull market is real. And you’re going to be kicking yourself if you don’t participate.

That’s why, today, we’re keeping the focus on gold…

We’ve already looked at why it’s key to own physical gold as a baseline in your portfolio.

We’ve also shown you how you can speculate on gold mining stocks to get “leverage” – or extra oomph – to the gold price.

Today, I’ll show you another way to play the rally – owning shares in gold royalty companies.

These checks fund new mine production. Each royalty company gets a cut of profits in return.

That’s why royalty companies are sometimes called the “secret bankers” of the mining industry.

Here’s how E.B. explained it…

It can cost $100 million for a mining company to open up a new shaft. If you help finance that infrastructure as a royalty company, you get a percentage of the profits from the gold inside.

But it gets even better. If that mining company finds more gold – which it probably will – you get a percentage of that production, too. You pay nothing for the effort these miners continue to expend to look for new deposits. You have a royalty on all future findings.

That’s a heck of a lot less risky than owning a regular gold mining stock. But the profits still roll in.

Gold mining companies, on the other hand, are much more speculative…

As we’ve been showing you, gold mining companies are best thought of as moonshot speculations.

Mining for gold is just an incredibly risky business.

First, you have to go and find just the right mineral deposits beneath the Earth’s surface.

Then, you have to pour hundreds of millions of dollars into developing the mine… getting licenses… even building roads and transport links.

And oftentimes, your mines will be in countries where corruption is rife… and geopolitical risk is high.

You get none of that with gold royalty companies.

But royalty companies still give you oomph over the gold price…

If you tuned in to our free Casey Daily Dispatch newsletter all about investing in gold royalty stocks yesterday, this chart will be familiar to you.

And it compares this with the price of a one-ounce gold bar going back to the start of the year. 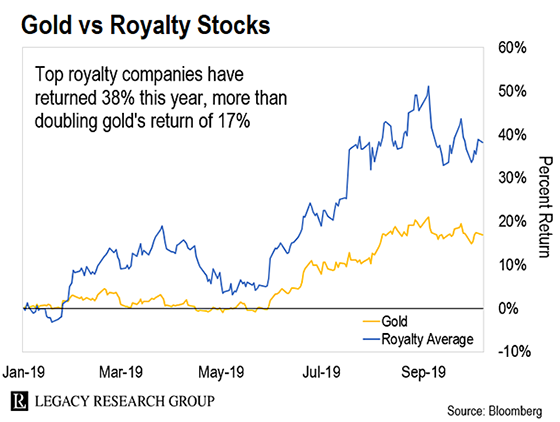 And when an investment boosts your returns… while at the same time reducing your downside risk… it’s something you want to own.

This next chart blows me away…

It tracks the average return of the same four gold royalty stocks during the last bear market in gold (August 2011 to July 2014).

And it compares it with the price of gold bullion. Take a look… 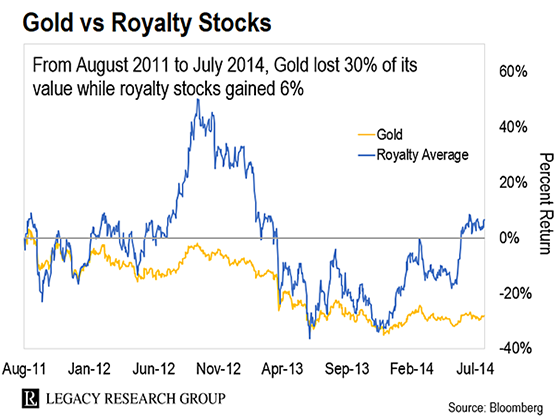 As you can see, the gold bullion price fell 30% over that three-year bear market.

Over the same period, the average gold royalty stock rose 6%.

There’s good reason for that outperformance…

E.B. knows this from personal experience. He sits on the board of a fast-growing royalty company. So he knows the industry inside out. And as he explained it to our Casey Research readers…

When the price of gold falls, gold mining companies still have to pay huge sums for the workers and equipment to get gold out of the ground. Selling that gold for less than the cost of mining can send gold mining stock prices plummeting.

Take the performance of the popular gold mining stock ETF the VanEck Vectors Gold Mining ETF (GDX) in the last bear market in gold. It plunged 79% peak to trough.

Sure, royalty payments shrink in a bear market. But the well-run royalty companies are saved by not having to face huge, unavoidable cost burdens. All a royalty company needs to keep going is an office… some desks… and a couple of computers.

Falling gold prices give royalty companies bruises, in other words. But they don’t suffer the broken bones the gold miners do.

That’s what makes royalty companies such a great way to play the bull market in gold.

They give you plenty of upside to the bullion price… and they protect your downside in a bear market.

E.B. says the best one to start with is Franco-Nevada (FNV). It’s the largest – not to mention one of the safest – of the gold royalty companies.

Switching gears, I just got off an interesting call…

It was with Mike Merson at Legacy HQ in Delray Beach, Florida.

Mike is the managing editor for master trader Jeff Clark. And he just put some exciting news on my radar.

Mike says Jeff is getting ready to launch a new trading advisory. It’s going to be based on the big idea Jeff presented on at the Legacy Investment Summit in California.

And judging by the response it got there, my hunch is it’s going to be a hit.

I’ll have more details on that for you next week. So keep an eye out for those. In the meantime, if you’re a hardcore Jeff Clark fan… or you’re just interested in becoming a successful trader… you can find out more here.