Gold investors are about to get more good news…

We first urged you to go buy gold last August. 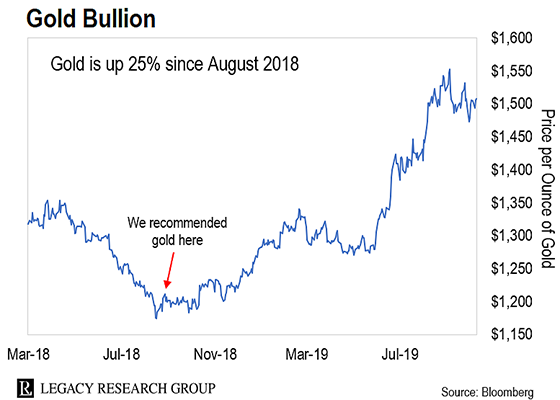 And I (Chris) have been a broken record on why it’s not too late for you to participate in the rally.

In these pages, I’ve shown you why our own go-to gold investing expert E.B. Tucker… legendary natural resource speculator Rick Rule… our globetrotting geologist Dave Forest… and Legacy cofounder Bill Bonner are all singing off the same hymn sheet.

Like me, they all believe that gold is headed higher.

But if you’re still not convinced, today, I’ll show you why Christmas is coming early for gold investors this year.

It’s in the form of another rate cut from the Fed in 21 days. And as you’ll see, it’s going to be rocket fuel for the gold price.

For most of 2018, Fed chief Jerome Powell talked about “normalizing” (aka raising) interest rates. And he followed through with four rate hikes.

That’s the most rate hikes in a single year since 2006.

But since the S&P 500 plunged 20% in the holiday quarter last year, that plan has been dead in the water.

And traders are now pricing in an 82% chance of another rate cut at the next Fed meeting on October 30.

That’s according to the CME FedWatch Tool. It’s a widely watched barometer of where rates are headed.

Why do we care so much about a dry topic like interest rates?

One look at this next chart below shows why… 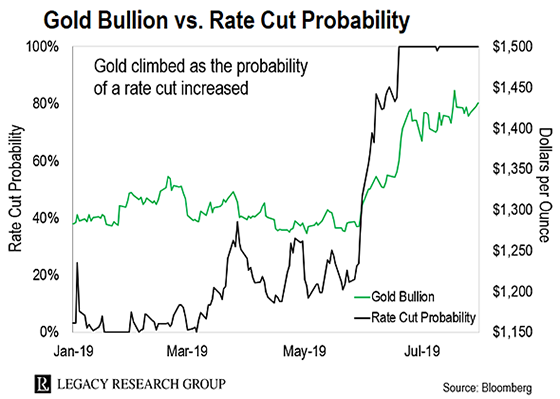 It plots investors’ expectations of the probability of a rate cut (the black line) against the price of gold (the green line) going back to the start of the year.

As you can see, as investors have grown more convinced the Fed would slash rates… the gold price has shot higher.

There’s good reason for that…

Gold allows you to safely store wealth over time.

But it doesn’t throw off fixed income payments, like bonds and bank CDs.

That’s a strong headwind for gold when rates are high.

When rates fall… those interest income sources disappear… and gold becomes more attractive to investors. That’s when demand shoots up.

How far will gold go from here?

Two weeks ago, at the Legacy Investment Summit in Carlsbad, California, I got the chance to sit down with E.B. Tucker on a panel discussion about gold.

Next year, I believe gold will take out its previous high. It’s already done that in almost every other currency except the U.S. dollar.

Until gold hits $1,900, people won’t be aware of what’s going on. The average professional asset manager has no gold stocks. He’s more likely to be figuring out how to open a crypto wallet than he is to be buying gold.

You want to be involved in investments as they’re moving through the awareness curve. Once everyone’s convinced themselves something’s a good idea, it’s too late.

Every fundamental reason why gold should move has been laid out in the last couple of years. Now, you’re going to start seeing things take off.

So now’s the time to take advantage. You won’t want to be sitting on the sidelines during this gold bull market.

Your first step is to buy some physical gold…

E.B. used to comanage a fund that invested in gold mining stocks. And he refused to open an account for new clients until they first bought some physical gold.

That’s because you have to have physical gold as a baseline in your portfolio. It’s not an investment. It’s more like wealth insurance.

If you’re new to gold, start with common one-ounce coins like the ones Gainesville Coins sells.

E.B. asked Gainesville Coins to create this page as a starting point for subscribers who are new to physical gold. And it’s extending this special offer to Daily Cut readers. (We do not get any compensation from Gainesville Coins for bringing you this offer.)

Next, you can move on to a few bars. Then, you can even buy shares in an exchange-traded fund (ETF) that stores physical gold on your behalf. At the summit, E.B. recommended the Sprott Physical Gold Trust ETF (PHYS).

Unlike many other ETFs, it owns gold on your behalf in allocated accounts. So you own specific bars that can’t be claimed by the fund in the case of a bankruptcy.

And tomorrow, we’ll introduce you to E.B.’s top gold investing idea from the summit. It’s not bars, or coins, or collectibles, or even regular gold mining stocks.

It’s a niche gold investment that gives you some of the upside of gold mining stocks… with less risk. So stay tuned for that tomorrow.