The Robots Are Coming!

And, believe it or not, that’s a good thing…

Jeff Brown (The Bleeding Edge, Exponential Tech Investor, and The Near Future Report) is our “go to” tech expert. I also like to think of him as one of the top candidates for the title of “Most Interesting Man in the World.”

And in today’s mailbag edition of The Daily Cut, he debunks perhaps the biggest myth out there when it comes to robotic workers…

Reader question: Why do you think AI in all its forms is such a great idea? What about the hundreds of millions of people who are going to lose their jobs because of AI? What will happen to them & their families? Will they all have to go on welfare, food stamps & Medicaid because they don’t have jobs anymore? Plus, many would also lose their homes because they can’t afford their mortgage payment. I would love to hear your response.

Jeff’s answer: Amazon is one of the world’s leading AI-robotics companies. Surprising, isn’t it? Most of us think it is just a massive e-commerce company.

Amazon’s robotics business began through a strategic acquisition in 2012 of robotics start-up Kiva Systems for $775 million. Kiva had developed robots that could sort and pick up packages.

Amazon liked Kiva’s technology so much, it didn’t want anyone else to have access to it. Hence the acquisition.

Amazon took over and turned Kiva’s work into a tremendous strategic advantage. To date, Amazon has deployed more than 200,000 robots in its distribution facilities. As a result, Amazon’s warehouses are nearly completely automated.

When orders come in, AI-powered robots locate the items for an order… take it to the packaging center… box it up… slap on the shipping label… and sort the package into the right loading bin where humans load the packages onto the trucks.

In the earlier days of Amazon, humans had to do all that work. But I discovered that since fully automating, Amazon robots reduced mis-sorts by more than 50%. That’s right; humans used to sort the boxed packages into bins for loading onto the trucks.

And they made a lot of mistakes, which resulted in late deliveries – because the package was loaded onto the wrong truck. That system is no more, however, and we can see the results today in how fast (and consistent) Amazon is able to deliver packages to us.

And here is the surprising statistic…

Since introducing robotic workers, Amazon added more than 300,000 new human jobs on its way to a six-fold increase in the size of its workforce.

It’s natural for us to think that robots will eliminate jobs. But at Amazon, they are creating them.

The reason is simple. Robots made Amazon far more productive, efficient, and profitable. That’s allowed the company to innovate, grow, and improve – which, of course, created a need for new jobs.

Technology continues to solve the world’s biggest problems. Yes, it creates a few, too. But I wouldn’t ever want to halt technological advancements because of a few bad actors. And I’ve been saying for years that AI and robotics will create far more jobs than they destroy.

So far, the data supports that. And yes, Amazon is an extraordinary company that remains a great long-term investment.

Next up… another question for Jeff Brown.

If you haven’t read it yet, it’s a detailed exposé of the largest nuclear fusion project on the planet… and if you’re a paid up subscriber, you can catch up here.

Reader question: I read your prediction about nuclear fusion with great interest. One thing that caught my eye was the estimate of 30 million tons of extractable lithium in the world. That sounded like a very small number. Taking into account something I came across a few days earlier:

Quote: And according to Bloomberg New Energy Finance, electric car production is expected to increase more than 30X over the next decade. To say this will cause a massive surge in lithium demand is an understatement. The same report from Goldman Sachs estimates for every 250,000 electric cars produced, lithium demand will surge by 70,000 tons/year. Research from investment bank UBS shows the world will use around 200,000 tons of lithium this year. In the next six years that’s expected to surge 5X to one million tons/year.

Is there a danger that we will use the majority of the world’s lithium reserves producing electric cars before we even get to start using this invaluable energy resource to produce clean energy? If so – and I’m not totally mistaken – perhaps the right thing would be to ban electric cars to save the lithium for the major clean energy revolution.

Now instead of asking Jeff to answer this question, we’ve got something even better…

Dave has been a professional geologist for over 20 years. He’s founded his own mineral exploration and development companies… raised tens of millions of dollars in equity financing… developed a 10 million-ounce gold deposit in Colombia… and became the first person granted a modern exploration license in Myanmar.

That’s just a small sample of what he’s done over the years. And it’s why – whenever there’s a question about natural resource investing – Dave is always our “go to” guy…

Dave’s answer: According to the US Geological Survey, global resources of lithium are currently around 62 million tonnes. Yearly demand is about 85,000 tonnes. Meaning we have 730 years of supply.

So what if demand rises due to electric vehicle use? The highest demand estimates are about 1 million tonnes per year. So we’d still have 62 years of supply.

Another important point: if demand and prices rise, miners will likely find more lithium. Exploration in recent years has been quite successful. Since 2015, mining companies have discovered nearly 30 million tonnes of new lithium resources worldwide.

Lithium is a relatively abundant element in the Earth’s crust. If the demand is there, we’ll almost certainly find more.

Next up in the mailbag… cryptos.

Now if you haven’t been following the space, you may not have noticed that bitcoin is up nearly 200% since the start of 2019. And that prompted one reader to ask our “crypto guys” about bitcoin’s smaller cousins… the so-called “altcoins.”

Reader question: Hi Legacy! Question for any of your crypto guys: Is there any hope for altcoins? My Bitcoin is doing great, but I am now wishing I had put 6x more in rather than diversifying into altcoins. Will they ever catch up? Thank you.

Teeka’s answer: You want to own a broad portfolio of coins and you want to have rational position sizes, because when bitcoin goes, the whole market goes.

We went back and looked at all the moves. And generally speaking, within six months of bitcoin breaking its downtrend line, you see the rest of the altcoin market begin to catch up, and then ultimately outperform.

So that opportunity is still there. We are just beginning to see life come back into the market.

Reader question: Jeff, is there ever a right time in the markets for options plays on ProShares or Direxion ultra-leveraged ETFs? Thanks.

Jeff’s answer: Hi Michael. Thanks for your question.

Traders often use options to gain leverage on a trade. And the ultra-ETFs are already leveraged. So what you’re asking me is if there is ever a time to use leverage to increase exposure on an already leveraged trade.

My first reaction was to tell you to just go to Vegas instead.

Actually, though, there are times when this can be a viable strategy – as long as you understand the beast you are trying to ride.

Leveraged ETFs use futures contracts to get “more bang for their buck.” That way, if the underlying security/index (like the S&P 500, for example) moves 1% then the ETF will – in theory – move 2%, 3%, or even 4%, depending on how much leverage is used.

But futures contracts often price in a time premium which slowly decays a little every day as the contract approaches its expiration day.

Options contracts do the exact same thing. So, you’re basically buying a “wasting asset” in order to leverage another wasting asset.

That’s almost always a bad idea. EXCEPT… when the time premium is minimal AND you have a high level of confidence that the move you are looking for will happen within just one or two days.

The time premium is usually quite small on options that only have one or two days remaining until expiration. If that happens to line up with a time at which technical indicators (like the CBOE Put/Call ratio, the McClellan Oscillators, and other indicators with strong predictive track records) are signaling an imminent move, then you could have a good setup for a very speculative trade.

It’s still a little too close to gambling for most folks to attempt. But if the right conditions line up, then aggressive traders might be able to profit from the strategy.

For our last question of the week, we turn to a curious reader who’d like us to peer into our cannabis crystal ball…

Reader question: I’m curious, what will the market for cannabis do if we have a market crash like many are predicting? Your thoughts please!

Unfortunately, Teeka couldn’t respond before we went to press. But as someone who’s studied the markets for over 20 years, I can shed some light…

There are two good reasons to believe the cannabis market will stay strong during a market crash.

But first, it helps to understand how unique a market cannabis is. That’s due to the fact that cannabis is medicinal as well as recreational. So let’s take those one at a time…

As a medicine, cannabis demand won’t collapse during a downturn. If you think back to your economics 101 class, demand for medicine and health care is inelastic. People need those things no matter what the economy or market is doing.

It’s the same story when you consider cannabis as a recreational “drug,” instead of a medicine…

Take a look at the chart below. It tracks sales of alcohol – the most popular recreational drug – between 2006 and 2017. 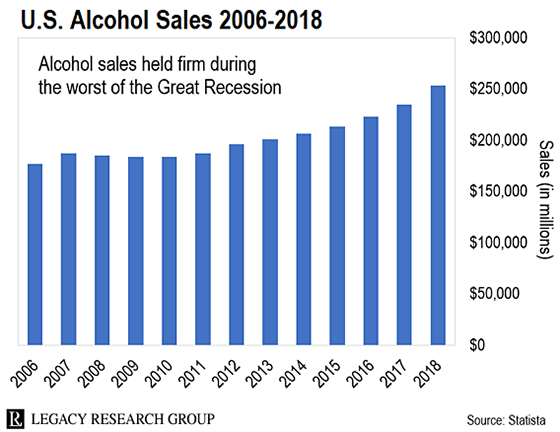 See how sales held firm even during the depths of the Great Recession? That’s because demand for alcohol tends to be inelastic. And it’ll be the same story with cannabis.

This is one of the reasons why Teeka Tiwari made cannabis investing a key piece of his newest research advisory – Palm Beach Venture. He can explain it way better than I can, so here’s a link to the radio broadcast where he lays it all out.

That’s all for today. Have a nice weekend.

P.S. Don’t forget… if you want to ask our gurus any of your questions in person, you can join us at this year’s Legacy Investment Summit. Read on here for the when, where, and why.