The wave of cannabis legalization sweeping North America is one of the market megatrends we’ve been tracking here at the Cut.

As that process unfolds, we expect the cannabis market to outgrow the market for tobacco and alcohol combined.

But legal cannabis stocks have been in a brutal bear market since early 2019.

Individual stocks did even worse… with some falling 80%… even 90%.

And even if you’re holding a small, speculative allocation to cannabis stocks in your portfolio, as we recommend, it’s been a painful time.

But as you’ll see today, the tide is starting to turn… 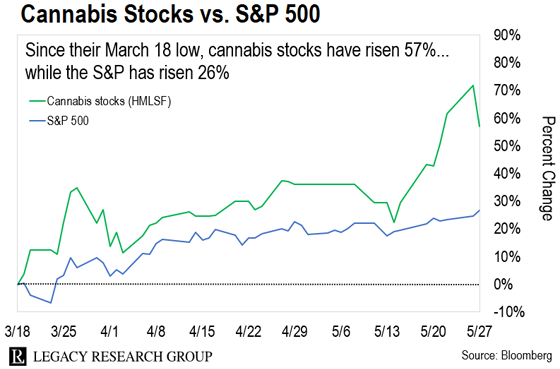 And here’s the key thing to keep in mind… It’s not just cannabis stocks that are doing well.

“Under the hood,” the cannabis industry looks stronger than ever.

So if you haven’t yet picked up some exposure to this profit trend… now is a good time to pull the trigger. (More below on how.)

Our mission is to keep you up to date with the latest ideas from Teeka Tiwari, Jeff Brown, Bill Bonner, Doug Casey, Dan Denning, Jason Bodner, Nick Giambruno, Dave Forest, and the rest of the Legacy team.

One of the biggest ideas we’ve been tracking is the blistering growth of the legal cannabis market.

Nick was one of the first analysts at Legacy to put this emerging trend on readers’ radars.

And in June 2017, he started adding best-in-breed cannabis stocks to the model portfolio at our Crisis Investing advisory.

I know that sounds like a crazy thing to say.

After all, cannabis stocks have been deeply out of favor with investors. Only the dot-com bust in tech stocks in 2000… or the “Crypto Winter” bear market for crypto assets in 2018… compares to the rout in legal cannabis stocks last year.

As I mentioned, some leading stocks plunged more than 90%.

But investors don’t look in the rearview mirror… They look out for what’s happening now… and what’s likely to happen in the future.

And what they’re seeing right now is good news.

This Illinois-based company makes and distributes a range of cannabis products in the U.S. These include edibles, cannabis vape liquids, CBD (cannabidiol) oil, and cosmetics.

Green Thumb is the main player in the new Illinois market. (In 2019, Illinois became the eleventh U.S. state to make cannabis legal for recreational and medical use.) It also has operations across eight other states.

And in the January-to-March quarter of this year, it became the first U.S. multistate operator to reach $100 million in sales.

Curaleaf (CURLF) and Trulieve (TCNNF), the two other largest U.S. multistate operators, each took in $96 million in sales.

And get this… These companies have been running for only a few years.

This level of growth in sales is not unheard of…

It’s quite common with technology companies.

But of those three high-flying tech companies, only ServiceNow is turning a profit. It’s a different story entirely for these multistate cannabis companies.

We can see that in something called their “EBITDA margins”…

EBITDA stands for “earnings before interest, taxes, depreciation, and amortization.”

Don’t get hung up on the jargon. An EBITDA margin measures the portion of sales a company keeps after paying for day-to-day costs, such as the raw material in its products, marketing, salaries, rent, etc.

Over the first three months of the year, Green Thumb Industries and Curaleaf recorded a 21% and 25% EBITDA margin respectively.

Trulieve kicked it up a notch with a 51% EBITDA margin. That’s a level of profitability that’s higher than 456 of the 500 companies in the S&P 500.

Canada legalized cannabis for recreational use nationwide in 2018. 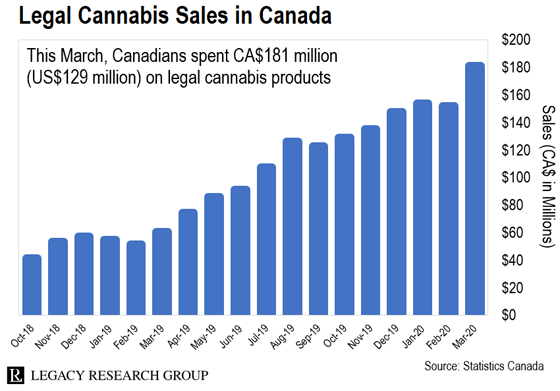 Long story short, the legal cannabis market is thriving… even though investor sentiment is in the ditch.

You want to buy stocks when they’re cheap, hated, and in an uptrend.

That’s the mantra of one of my investing heroes, Steve Sjuggerud at True Wealth.

And it’s the single most important lesson you’ll ever learn as an investor.

If you follow Steve’s advice, you’ll always keep your downside risk low. (The stocks you buy are cheap already.) And you’ll maximize your upside potential. (The lower the price you pay to own a stock, the higher your profits when you sell.)

This sweet spot is exactly where cannabis stocks are right now.

Last year, the legal cannabis market got hit hard with a boatload of negative headlines. Mainstream investors panicked and sold their positions… which crushed prices.

But as usual, the mainstream ignored what was going on under the hood. The fundamentals – sales, market share, and profits – are telling a completely different story.

The media failed to report on the speed the industry is growing. Instead it focused on fearmongering headlines centered on the risks of vaping.

And there are plenty of catalysts for higher prices on the horizon.

For instance, banking is about to get a whole lot easier for U.S. cannabis firms…

Cannabis is legal in 39 U.S. states in some form. But it’s still illegal on the federal level.

So it’s a struggle for U.S. cannabis companies to open bank accounts or access lines of credit… even though they’re operating in states where voters have chosen to legalize their products.

But this is changing.

Treasury Department figures reveal that there are now more than 730 banks and credit unions providing services to cannabis companies. That’s almost double the number from the end of 2017.

Public opinion is also moving in the right direction. In a Pew Research survey last year, 67% of Americans said cannabis should be legal. That’s a record for the poll, which stretches back to 1969.

And it goes even deeper than that.

In a YouGov poll in March, 53% of respondents said cannabis companies should be named essential businesses.

And in 41 states where coronavirus-induced lockdown laws were in place, 28 of them declared cannabis companies essential services and allowed them to stay open.

The tide is turning in favor of cannabis on Capitol Hill, too…

For instance… California reported earning $84.7 million in cannabis tax revenues in the first three months of this year.

It’s in the interest of lawmakers from those states to support their local cannabis businesses.

It’s the new stimulus bill that made it through the House of Representatives two weeks ago.

Tucked in the pages are measures that will allow federally regulated banks to work with cannabis companies without fear of backlash.

With all this good news for cannabis, it’s time to jump in if you haven’t already. An easy way is with the Horizons Marijuana Life Sciences Index ETF (HMLSF) that I mentioned up top.

It invests in shares in 54 leading cannabis stocks around the world and is a good proxy for the overall sector.