Chris’ note: Last week, we did a deep dive into one of the biggest profit trends on our radar – the metaverse. (Catch up in the archives here.) This week, we’re shining the spotlight on the biggest risk to your wealth – inflation.

Kicking it off is an insight from renowned speculator Dave Forest. Over at our Strategic Investor advisory, he’s been predicting higher inflation for 2022. He calls it “Project Zimbabwe,” after the hyperinflation in that country a decade ago.

The U.S. probably won’t get to Zimbabwe levels of inflation. At one point, a gallon of gas there cost 1 trillion Zimbabwean dollars. But with the Fed dedicated to keeping the stimulus spigots open… and rising energy costs feeding into rising consumer costs, Dave says prices in the U.S. will keep climbing…

Inflation is on the rise…

Consumer prices were up 6.8% this November compared to November 2020. That’s the highest rate in nearly 40 years.

The Fed is sticking to the script that inflation is “transitory.” But I don’t believe it’s as temporary as the Fed claims.

Last month, when it announced it’d start to taper its bond-buying program – aka quantitative easing, or QE – some took it as a sign that the central bank thinks inflation is slowly coming back under control.

But tapering doesn’t mean the Fed is pulling out of more stimulus completely. It means it’s doing a little less stimulus than before.

If the Fed wants to kill inflation, it has to reverse course. That means violently raising interest rates and stopping QE altogether.

If it does, the economy will stall. But that may be what we need to stifle inflation.

That’s what the Fed faces. Getting things back to normal requires a controlled stall. But even if it’s the right call to make, it’s too politically damaging.

Spending trillions of dollars without paying for it with higher taxes increases the national debt burden. So the Fed is trapped. It can’t raise rates meaningfully. And it can’t stop firing the money gun.

I call the situation “Project Zimbabwe.”

I don’t think we’ll come anywhere near the hyperinflation of Zimbabwe in 2008. Peak inflation there hit 79.6 billion percent, and a gallon of gas cost 100 trillion Zimbabwean dollars. But I believe U.S. inflation is here to stay.

Pumping money into the world creates more demand for products that the system just can’t handle.

When most people are flush with cash, they want to spend it. We saw this when retail sales jumped 1.7% in October even with rising prices. People want to buy more TVs, more appliances, more cars…

The other side of inflation is energy. We need it to make everything we consume – food, electronics, transportation…

Moving away from fossil fuels may be a noble cause. But it’s helped push up consumer prices.

For instance, look at fertilizer prices from November 2020 to last. 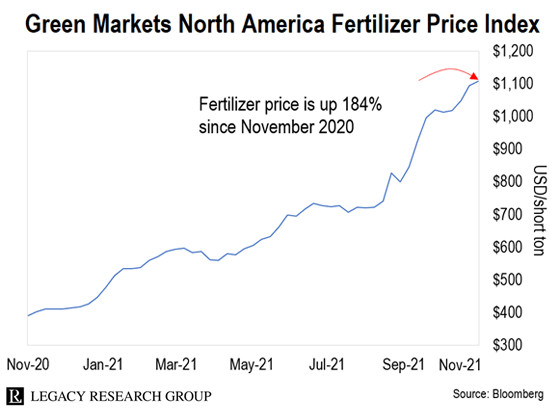 One of the key ingredients in fertilizer is ammonia. Making ammonia is energy-intensive. It’s a byproduct of natural gas. And the price of natural gas is up nearly 100% this year because of rising demand.

China and Russia have stopped exporting ammonia so they have enough domestic supply. Fertilizer producers can’t get the raw materials they need to make their products. So prices are skyrocketing.

Without fertilizer, you wouldn’t be able to buy fruit or vegetables at the local store. There wouldn’t be enough to go around.

When these price hikes hit farmers, they pass those costs on to consumers, who end up spending more for the same products.

In a free market, when energy heads higher, oil companies ramp up spending to take advantage of the higher price. But today, instead of looking for cheap fossil-fuel energy sources, they’re developing more expensive clean energy projects like wind or solar.

That’s why I don’t think oil or gas prices will head lower any time soon. And that keeps the inflation feedback loop running.

As the saying goes, “The only cure for high prices is higher prices.” In other words, we may not see prices fall until they go so high, they curb demand.

Meantime, it’ll have to become a severe political concern for the Fed to admit there’s a problem… and act.

Buckle up for higher inflation.