Our warning on this pot stock proved timely… $150 billion has stepped out of the shadows… How to “trade war proof” your wealth… In the mailbag: “Too many are drinking the Kool-Aid”…

“A ton of downside risk”…

That was our warning in last Thursday’s Daily Cut.

It had skyrocketed more than 1,000% since it listed on the Nasdaq on July 18. And as we noted then, it had the “hallmarks of a stock in the grip of a mania”…

One, it had reached dot-com-like valuations. When we wrote about it, this pot grower was trading at more than 700 times sales.

Two, it was trading all over the map. The day before we published our essay, shares had shot up 100% in a single trading session… and trading had been halted five times because of volatility.

As we predicted, Tilray didn’t defy gravity for long… 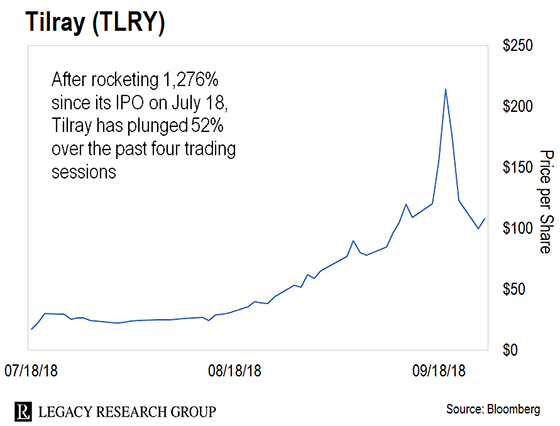 Last Wednesday, Tilray shares closed at $234. That represented a 1,276% gain since the company’s initial public offering (IPO) in the U.S. in July.

A wave of pot legalization is sweeping the U.S., too.

Despite being illegal at the federal level, Oklahoma recently became the 30th state to make cannabis legal for medical use. Of these 30 states, nine allow recreational cannabis use.

As Crisis Investing readers know, it’s been a rewarding setup…

Even though the longest holding period so far is only 15 months, the average gain for the eight legal pot stocks Nick Giambruno has recommended under his “End of Marijuana Prohibition” theme is 147%.

Nick has also given our Casey Report readers the chance to make gains of more than 300% on this profit theme.

The big picture is that an enormous industry is emerging from the shadows. The United Nations estimates the global cannabis market to be worth about $150 billion a year.

About $33 billion worth of coffee is produced annually. So, the cannabis market is about four or five times bigger than the coffee market. It’s also bigger than the iron, copper, aluminum, silver, corn, and wheat markets.

The end of cannabis prohibition is now inevitable. That means we can finally profit off that $150 billion market without risking jail time.

But you need to limit your downside risk…

By diversifying your portfolio of speculative investments with around five to 10 positions, you can suffer losses on the majority of the positions and still make huge returns. A 1,000-to-1 – even a 100-to-1 – winner will more than make up for the ones that don’t work out.

As Tilray proved, volatility (aka price swings) can be wild. Not every speculation will work out. So diversification like Nick describes is key.

As we told you yesterday, it’s why you want to make sure you also diversify away from companies with high levels of overseas revenues.

These companies could get you into trouble as the trade war intensifies.

It’s why regional and community banks make so much sense right now.

They do business within specific regions in the U.S. – a few states at most. They earn virtually all of their revenues from within the U.S. International trade conflicts won’t affect them.

These banks have two other powerful tailwinds at their backs…

The first is rising interest rates…

And as you’ll know if you looked at the news today, we’re in a world of rising interest rates.

Following its monthly rate-setting meeting today, the Fed raised its target rate by a quarter point, to a range of 2% to 2.25%.

It also told investors it plans to hike rates one more time before the end of 2018… and three more times next year.

The second tailwind is deregulation…

In May, President Trump signed the Economic Growth, Regulatory Relief, and Consumer Protection Act into law. It rolled back restrictions on some of these banks.

The new law adjusts the size a bank has to be before it qualifies for certain regulatory scrutiny. Before this law was passed, a bank with assets of $50 billion or more would be considered a “systemically important financial institution” and would have stricter regulations from the Fed.

The new law raised the threshold to $250 billion. Many of these smaller banks can now operate without the Fed looking over their shoulder. Compliance costs will fall. And profits will rise.

In short, rising interest rates and less regulation will send profits at these banks higher. They’re also some of the most “trade war proof” investments in America today.

Finally, in the mailbag: “Too many are drinking the Kool-Aid”…

The support keeps coming in for Dan Denning’s Declaration of Digital Rights, which we shared with you in last Wednesday’s Cut – “Google’s Secret Pact With the Chinese Government”…

Thank you for stepping up. Too many are drinking the Kool-Aid. Our media is censored more than most realize, until they see a foreign broadcast.

Yes, I would sign and back it up with my vote. I am an old fart who has watched our liberties and freedoms hacked and given away by all these whining idiots who are pulling down statues, infringing on our First and Second Amendment rights, and giving away bits and pieces of America for the past 10 years or more.

I suggest that you begin your campaign ASAP. Our freedom of speech is quickly slipping away.

I agree with Dan Denning’s arguments. I am horrified at how quickly and extensively the government and corporations are using technology to gather information and aggregate on innocent citizens – which subverts the principle of innocent until proven guilty. I am also alarmed at how little the average person seems to be aware or interested in reining them in.

The myth “unless you are guilty, you have nothing to hide” runs deep. I have nothing to hide, but I don’t want a police officer and/or corporate sales person following me around at all hours of the day taking notes and recordings and sharing it with who knows who for purposes not shared with me – nor do I throw out my window blinds.

I don’t believe such measures keep us safe, and I do think they are contrary to democracy. And shame on Google for choosing profit over principle!

I’m in. Keep us posted, especially with ways that we can help. Seriously, I am IN!

We need to take a stand for our liberty and rights which are being infringed through digital censorship (Google and Facebook). I will commit time and resources to this cause and do anything I can to help move this forward.

Have you added legal pot stocks to your portfolio? Or are you more interested in getting Dan’s Declaration of Digital Rights off the ground?

We’ll discuss what we’re calling “The Technology of Tyranny”… and share ways you can take a stance on this important issue… all from the luxury Fairmont Hotel in Bermuda.

Some of the brightest minds in the industry will be there – including master speculator Rick Rule… media personality Glenn Beck… Emmy Award winner John Stossel… and all our experts at Legacy Research. Find out how to join us right here.