We’ve reached peak globalization… The S&P 500’s Achilles’ heel… This stock market niche is “trade war proof”… In the mailbag: “The government belongs to me”…

To catch up on what it’s all about, make sure you read last Wednesday’s Daily Cut.

If you’re worried about the erosion of online privacy… and censorship by Google and Facebook… it’s a must read.

We’ll be returning to this theme later on this week. Today, we’re taking a deeper dive into another theme that needs to be on your radar – the escalating trade war.

Yesterday, the trade war kicked into a higher gear…

It brings the total value of Chinese goods hit with U.S. tariffs to $250 billion. That’s almost half the value of imports from China last year.

And China has hit back with tariffs on $110 billion of U.S. imports – including soybeans, chemicals, rubber, and textiles.

But here’s the thing…

It doesn’t matter if you think trade tariffs are a good idea or not. The mainstream media has spilled enough ink on the pros and cons already.

What you need to know is that stocks you own could be at risk. In particular, stocks in the multinational corporations that make up the S&P 500.

Forget about the ins and outs of the trade war. The world has entered a new era of “peak globalization.” Global trade has reached a plateau and is starting to decline.

In an era of peak globalization, international business will be hardest hit. The average S&P 500 company earns 48% of its revenues overseas. If even just one-quarter of those overseas revenues goes up in smoke because of the trade war, it will destroy share prices.

Nick’s been urging readers to buy U.S. small-caps to protect their wealth…

Definitions vary, but small-cap stocks have a market value of between about $300 million and $2 billion.

They’re smaller, newer firms than the multinational corporations listed on the S&P 500 – where market value starts around $5 billion and goes up to more than $1 trillion. So they still tend to earn most of their revenues in the U.S.

For example, the average stock in the Russell 2000 small-cap index earns about 78% of its revenues inside the U.S.

That leaves 22% of revenues at risk in a trade war for the small-cap stocks it tracks… versus 52% for large-cap S&P 500 stocks. You can see this in the chart below. 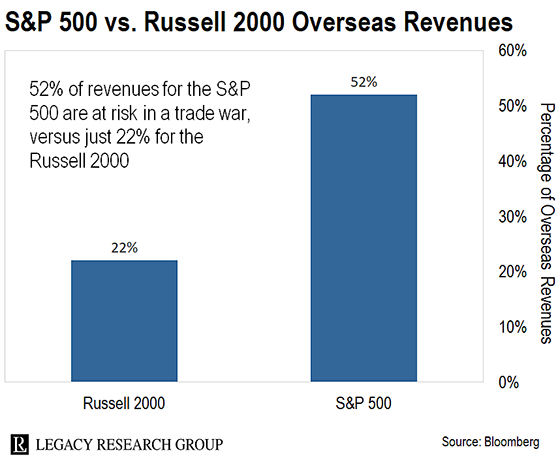 And there’s an even more “trade war proof” niche of the U.S. stock market…

You may remember Grant from his two years as co-author on our Palm Beach Letter advisory with Tom Dyson. He now works with the more than 20 Legacy analysts to help spot the best opportunities that should be on your radar.

It’s not just large corporations that are taking a hit. As U.S. manufacturers boost prices to pay for rising input costs, demand will suffer. This, in turn, will lead to layoffs.

Followed to its logical conclusion, the Main Street economy will get hit with both rising shelf prices and rising job losses.

Take Elkhart, Indiana, the “RV capital of the world”…

Elkhart is a town of just 200,000 people. It makes about eight out of every 10 RVs Americans buy every year. And it’s been booming.

But the trade war is starting to take its toll. In June, demand for the RVs Elkhart makes fell by about one-fifth. Grant again…

The RV Industry Association says the tariffs on steel and aluminum are increasing manufacturing costs. People are buying fewer RVs as a result. RV makers in Elkhart have responded by laying off 883 people since the start of the year.

Assuming a levy of 25%, tariffs on $250 billion worth of Chinese imports are a $50 billion hit to American consumer. Even if the levy is less than that, it’s bound to have negative effects on U.S. manufacturers.

In short, in a trade war, you want to own stocks in companies that do most of their business at home. You also want to avoid companies – such as manufacturers – whose input costs will rise.

These are not your big, multinational banks. These banks service specific regions in the U.S. – a few states at most. That means they get virtually all of their revenues from inside the U.S. Plus, because they’re not making a physical product, they don’t care if manufacturing costs rise.

They’re easy “one-click” ways to stay invested in the U.S. stock market… while still sheltering your wealth from any fallout from the trade war.

Plus, as we’ll explain tomorrow, two economic tailwinds are set to drive profits at banks higher… no matter what happens on the trade war front. Stay tuned…

Meantime, in the mailbag: “The government belongs to me”…

Like we mentioned above, feedback keeps pouring in for colleague Dan Denning’s Declaration of Digital Rights…

I, too, am increasingly alarmed at the loss of our constitutionally-guaranteed rights to privacy. There are several facets to this loss, as I see it. It would take a long treatise to name them all, but I will highlight the most troubling to me.

First is the unprecedented powers given to (or simply usurped by) shadowy, unaccountable branches of the government (NSA, CIA, FBI) to spy on Americans without cause, or for flimsy reasons that do not stand up in court. I am a law-abiding American, and my data should not be swept up under the guise of “national security” or some other nebulous premise.

The basic principle of our constitutional government is the right of the individual to live a free, peaceful life, without government interference. I am innocent until proven guilty, not the other way around. I am supposed to have the right to privacy in my home and my person. I am not a pawn of government, nor do I belong to the government. Quite the opposite, the government belongs to me and my fellow citizens. It feels as if our own government is at war with its populace.

Second is the “badness of big”, as we call it in our family. When corporations or governments get to a certain size, it is nearly impossible to rein them in when they are skirting the law, outright flaunting it, or when they become a law unto themselves. Does Google or the NSA have a warrant to sweep up my data and that of millions of others? That’s how it’s supposed to work in America. And who appointed Google “international censor of the world”? I don’t remember voting for that! Democracy works best when all opinions are expressed, no matter how obnoxious they may be.

I am old enough to have known folks who escaped communist regimes in eastern Europe. They told of governmental overreach eerily similar to our own today. We must demand our “representatives” to return to us the constitutional republic that we were founded to be. Otherwise, the “big” will continue to be emboldened in their take-over of every facet of our lives, and America will go down in history as just a failed experiment. May freedom reign once again in this great nation!

Dear Sirs, your concern is not just limited to the U.S.; it is a global issue. There are two things that worry me:

Great ideas. I support them, though I see minimal chance they will be implemented. Those in power ALWAYS hang on to power until the bitter end. Good luck anyway!

Go for it, Dan. This is such an important issue!

I’m all for the protection of privacy, particularly the “banning” of these clustered cameras on every corner. I’m not buying the “need for enhanced security” line. Nobody asked me how I’d feel about my every move being under the watchful eyes of the disrespectful microscope the moment I’d step out of my door.

The suggestions about privacy are right on. I try to tell people about this up and coming police state, but younger people seem to be hooked to their cell phones, jobs, and family. They just cannot believe that it will ever happen in America… The Land of the Free and the Brave.

I support your proposals and wish you good luck from Canada. As always, the major challenge is to motivate “We the Sheeple” to recognize where events before us are leading. Unfortunately, I think that most of us are like “squirrels witnessing a bank robbery”!

Are you interested in hearing more about the growing threat of a surveillance state – and ways to take back your freedom?

I (Chris) will be presenting on that important topic at the first-ever Legacy Investment Summit next month at the luxury Fairmont Hotel in Bermuda.

For more details on how to join me – along with Dan Denning, Bill Bonner, Doug Casey, Teeka Tiwari, Jeff Clark, and the rest of the Legacy Research team – read on here.

And as always, keep your insights and questions coming at [email protected].