We’ve gotten so gloomy, it’s easy to miss the good things happening in the world…

The media is widely broadcasting these headlines. They’re serious. And they deserve our attention.

But they’re not only things happening in the world.

And letting the doom and gloom suck you in can lead you to overlook the spectacular breakthroughs happening all the time.

That’s why, today, we’ll look at a new milestone in one of the tech megatrends we’ve been tracking for you – precision medicine.

This won’t just transform healthcare as we know it… It will also pave the way to spectacular returns for pioneering investors.

It’s a new approach to disease prevention and treatment based on someone’s unique genetic makeup. And as you’ll see, it’s about to go mainstream.

Today, most physicians are working blind…

Sure, your doctor can prescribe you a battery of diagnostic tests.

And many of these – such as magnetic resonance imaging (MRI) and ultrasound scans – are highly sophisticated.

But doctors still can’t see what’s going on inside your genome – your complete set of DNA.

Our genome determines almost everything about who we are – from the shapes of our bodies… to our height… to our hair color.

It also determines what diseases we get.

We know of more than 6,000 diseases caused by mutations – or errors – in our genetic code.

And some types of cancer – including breast, ovarian, colorectal, and prostate cancers – are strongly influenced by our genes.

It allows doctors to see the diseases potentially written in our DNA. And with genome sequencing technology, doctors can move from treating those diseases… to preventing them before they happen.

As I’ve written about in these pages, all this is possible thanks to CRISPR gene-editing technology. It allows you to “cut” mutated genes from your genome and “paste” healthy ones in their place.

And doctors have already used this process to effectively treat certain genetic blood diseases, such as sickle cell anemia and beta thalassemia.

That’s a rare genetic disease that destroys the cells in the optic nerves in your eyes. And without an effective treatment, about 90% of those affected lose their vision by the age of 50.

There’s no cure right now… but a 2017 trial using gene therapy to treat LHON showed significant improvements in more than 60% of patients in a 12-month period.

They’ve even used gene editing to re-engineer the T-cells in our body to kill cancer cells.

Normally, cancers can evade our T-cell defenses. But doctors have re-engineered them to recognize when they’ve encountered a cancer cell… and kill it.

The problem is human genome sequencing has been too expensive and time-consuming to reach a mass market.

Your genome contains three billion “base pairs” of DNA…

DNA is made of two linked strands. These wind around each other to resemble a twisted ladder – also known as a double helix.

Each base pair forms one rung of that ladder.

So, we’re talking about a ladder with three billion rungs. And as you can imagine, sequencing those base pairs requires massive amounts of computing power… and sky-high costs.

But thankfully, that’s all about to change…

Over to our tech expert, Jeff Brown. He’s been tracking the advances in genetic sequencing for readers at our free tech investing e-letter, The Bleeding Edge…

The cost to sequence a human genome was more than $100 million back in 2001. But those costs have fallen steadily year after year. Since 2007, this trend has accelerated at a pace even faster than Moore’s Law.

It’s the observation that the number of transistors on a microchip – and therefore computing power – double about every two years.

As a result, the cost to sequence a human genome hit $600 at the end of last year. That was a major milestone. That’s in the range for many to pay for sequencing their genome out of pocket.

Now, to be clear… This technology is far more advanced than the at-home genetic kits companies such as 23andMe and Ancestry.com use.

Those home kits don’t sequence your entire genome… but about 0.1% of it. Then they use that sample to determine the likelihood your genes came from a particular individual or group.

The NovaSeq X Series sequences all three billion base pairs of your DNA. And it picks up any mutations you may have that can lead to disease.

And these new machines are a major upgrade from existing whole genome sequencing tech. Back to Jeff…

Illumina’s NovaSeq X machines will be about 60% more efficient than today’s sequencers. That will cut the cost to sequence a human genome to just $200.

It’s about precision medicine for the masses. And it’s happening now. Illumina’s new machines will ship in the first quarter of 2023. This will send the precision medicine trend into hyperdrive… and change healthcare as we know it.

Most people just don’t realize it yet…

Look at the iShares Biotechnology ETF (IBB). It tracks the performance of the world’s leading biotech stocks, including Illumina.

It peaked a month before the tech-heavy Nasdaq… and has tracked it lower ever since. 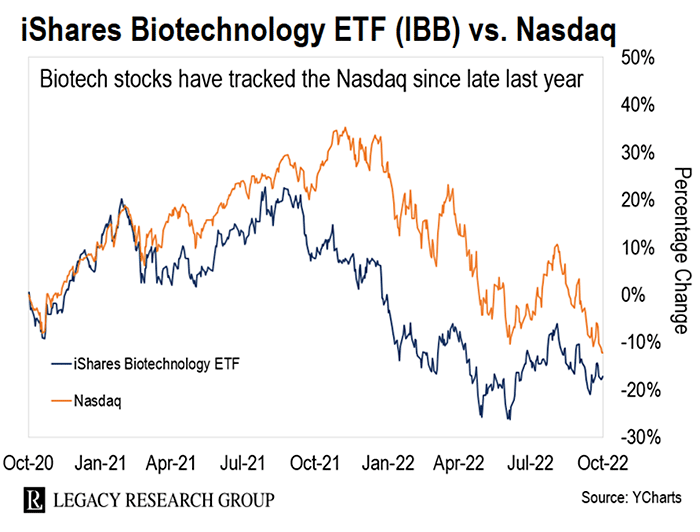 That tells us investors aren’t paying attention to the breakthroughs happening in the biotech world.

Instead, they’ve been offloading their biotech stocks en masse… along with tech stocks and anything else they deem “risky.”

That leaves prices at 2015 levels for the world’s best biotech stocks. 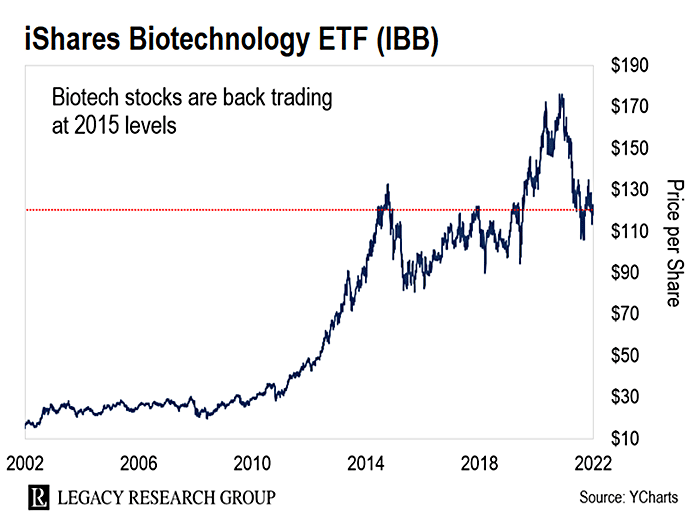 That’s seven years ago… when genomic sequencing was still in its infancy.

But as Jeff has been pounding the table on, it’s about to go mainstream.

And when investors catch up to the golden age of biotech this will bring about, the sector will soar again.

I know it’s hard to seize opportunities like this…

As I mentioned up top, there are some serious problems in the world.

And we’ve all got psychological scars from this year’s bear market.

But unless you think biotech stocks will continue to sell at 2015 prices forever… despite the breakthroughs we’re seeing with genetic sequencing… now is a great time to pick up some exposure to this tech megatrend.

And thanks to the breakthroughs happening there… and the real difference this will make in people’s lives… it’s hard to imagine a more exciting sector than biotech to be invested in right now.

And according to scientists at MIT’s Center for Biomedical Innovation, there are thousands of trials underway that may see 40 to 50 new genetic therapies approved for clinical use by 2030.

The golden age of biotech is just getting started…