It’s a great time to be an investor…

Even secondhand sneakers are going up…

If you think that’s a lot, last month, buyers forked out $3.1 million on 621 pairs of virtual sneakers.

You can’t wear these sneakers. You can’t hold… or even touch them. They exist only in digital form.

When you buy them, you’re really buying something called a non-fungible token (NFT). It’s a type of crypto that gives you ownership over a copy of a digital video or image.

And even $3.1 million is small potatoes compared to what some folks are willing to pay for NFTs.

Last week, a buyer in Singapore handed over $69 million for an NFT by a 39-year-old graphic designer out of Charleston, South Carolina, called Mike Winkelmann (aka Beeple).

It’s a digital collage of other digital artwork Winkelmann created over 13 years.

This is classic bubble behavior…

Or as our cofounder Bill Bonner put it over at his daily e-letter, Bill Bonner’s Diary…

It’s La Bubble Epoch. The best of times… and the worst of times. Grand and squalid. An information age, where nobody knows anything, and even the surest lessons of history are forgotten.

With that in mind, I (Chris Lowe) will continue my crusade to get you to pay attention… and start playing defense as well as offense in your portfolio.

I know it feels fantastic to be bagging the triple- and quadruple-digit gains my colleagues at Legacy Research have served up in their model portfolios.

But when the party inevitably ends… and you know what game plan to follow… I promise you’ll thank me.

There’s no hard-and-fast definition of a bubble…

Financial wonks argue over it all the time.

My favorite is from Charles Kindleberger’s 1978 book Manias, Crashes, and Panics.

He was an economic historian who studied just about every bubble in history going back to the 17th-century tulip bulb mania.

And he distilled the essence of a bubble as follows…

A bubble is a period in the market when valuations become untethered from reality.

All bubbles require two things… an abundance of easy money and a narrative that the bubble assets can only go up.

FOMO rules in a bubble…

That’s internet-speak for “fear of missing out.” It’s the psychological mood that drives all bubbles.

Here’s Kindleberger on it…

There is nothing so disturbing to one’s well-being and judgment as to see a friend get rich.

You may recognize this phenomenon.

Do you have a friend who made big bucks on Tesla (TSLA)… or GameStop (GME)? Did you start to get envious? Did you buy some shares so you wouldn’t miss out?

That’s what happens in bubbles. Instead of figuring out if a stock is a good value at its price given its future earnings prospects… investors opt for the game of greater fool.

The investment they’re piling into may be foolish – as in crazily overvalued. But they figure they’ll find a greater fool to pay an even higher price as the bubble inflates.

A classic example was all the “flipping” of real estate at the height of the housing bubble in 2007.

The condos and houses weren’t worth any more. But the game of greater fool spiraled their prices higher.

The problem is bubbles are easier to spot than to time…

As I showed you last week, they can go on a lot longer than most folks expect.

Even the best investors make fools of themselves trying to time the top.

Take Ray Dalio, founder of the world’s largest hedge fund, Bridgewater Associates. In 1995, he told Pensions & Investments magazine we were “approaching a blow-off phase of the U.S. stock market.”

Or take legendary trader George Soros. His Quantum Fund lost $700 million on bets in 1997 and 1998 that the dot-com bubble would burst.

Dalio and Soros correctly called the bubble. But they got the timing horribly wrong. They’re two of the most successful investors alive. And if they can’t do it… it’s unlikely you or I can.

This is the hardest thing to get your head around…

Just because we’re in a bubble doesn’t mean it’s time to sell your stocks.

So instead of trying to predict when it will happen, the best thing you can do is follow an asset allocation plan.

This plan should cover offensive and defensive plays.

You can still aim to shoot the lights out with cryptos, pre-IPO shares, tiny biotech stocks, and shares in blank check corporations (aka special-purpose acquisition companies, or SPACs).

You just want to make sure you also have a good chunk of your portfolio in defensive investments such as cash and gold.

It also helps to study previous corrections and crashes…

There have been 10 corrections and crashes going back to 1987.

They’re in the table below. It looks at the biggest drawdown (peak-to-trough fall) investors in the S&P 500 had to endure in each crash. It also shows the number of days they had to wait for the index to recover that loss. 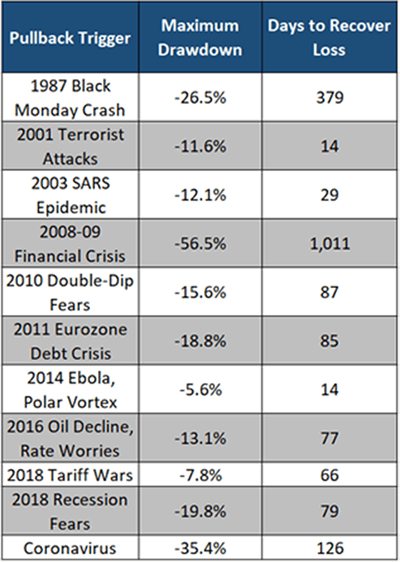 As you can see, the S&P 500 recovered each time. And except for the 1987 Black Monday crash and the 2008 financial crisis, it did so in less than three months.

After the 1987 crash, it took just over a year for the S&P 500 to recover. And after the 2008 financial crisis, stocks’ recovery took more than two and a half years.

Those were difficult times, to be sure…

But folks who held for the long term recovered their losses… and then some.

Just remember not to bet the farm on stocks…

Too much exposure to the stock market leaves you open to the kind of losses that are psychologically hard to bear.

If you were 100% in stocks, this cut your portfolio in half.

You may think you’d have the mental fortitude to ride out a crash like that. But few do when it actually happens… and you’re worried your nest egg could disappear.

If you had allocated, say, just 30% of your wealth to stocks, the 2008 plunge would have translated to just a roughly 17% hit to your net worth.

Is that painful? You bet.

But it’s not what Bill calls a “ruinous loss” – a loss you never recover from.

I hope you take this advice to heart…

I witnessed the 2008 crash wreak havoc on people’s retirement dreams.

Folks who went into that crash without a game plan got crushed. I don’t want to see that happen to you.

My mission here at the Cut is not only to help you make significant wealth with the best moneymaking ideas from the Legacy team. It’s also to help you hold on to the wealth you make.

I know getting folks to think about their downside risk when their portfolios are soaring is like getting kids to eat their greens.

But now is the time to put precautions in place… not in the middle of the next financial panic.

Investing is not easy. When investing seems easy, it may be time to worry. At least, keep a sense of humility and try to maintain perspective.

Check out more on how to sensibly allocate your assets in our Coronavirus Crisis Playbook.

You’ll learn about the actions to take now to make your portfolio crash-resistant… how to make money as stocks fall… and a proven commodities system you can use to avoid having your wealth wiped out in the next crisis.

As a Daily Cut reader, you can access this playbook for free here.