Fast-forward to today… and the Dow is up 63% and close to its all-time high.

It’s a similar story for the broader S&P 500 and the tech-heavy Nasdaq. Take a look… 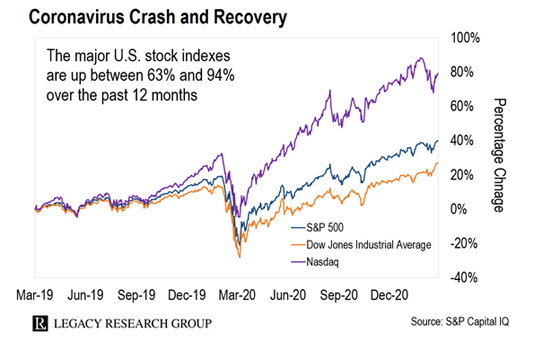 The Nasdaq has done even better. It plummeted as much as 30% in the coronavirus crash. But over the past 12 months, it’s up 94%.

If you’re a longtime reader, and you followed our repeated advice in these pages last March, you held on to your stocks during the crash. And you’ve been able to enjoy one of the most rewarding 12-month periods in the stock market on record.

But this isn’t just a history lesson. As you’ll see today, doing nothing but holding on is nearly always the best reaction to a crash.

If you’re new to the Cut, welcome aboard…

My mission is to help you move the needle on your wealth by highlighting the best moneymaking ideas from Teeka Tiwari, Jeff Brown, Dave Forest, Nick Giambruno, Jason Bodner, and the rest of the Legacy Research team.

But there’s no point in making wealth if you fail to hold on to it. That’s why we also keep a lookout for threats on the horizon.

And as we explored in these pages last week, stocks are in a bubble right now.

Valuations are becoming untethered from reality. That’s thanks to the cash injections the government and the Fed are pumping into the economy… and a popular narrative that stocks can’t fall thanks to all the stimulus sloshing around.

As I’ve been showing you, bubbles can go on for a lot longer than most people think. But eventually, they burst. And folks who are mentally unprepared usually panic, sell, and get wiped out.

So pay special attention today… especially if you’re a new reader. What you do in the next crash could be the difference between retiring on time or having to work long into your golden years.

“Don’t let the crowd convince you to panic sell”…

Scary headlines about the coronavirus pandemic were filling the mainstream news. People were starting to panic buy toilet paper and masks.

I didn’t underplay the seriousness of the pandemic. But I urged you not to panic sell your stocks…

So far, the virus has killed 4,371 people… and infected nearly 120,000. And according to folks who spend their lives studying the spread of viruses like this one, it’s just starting to hit its stride.

But as I and my colleagues here at Legacy Research have been hammering on, the worst thing you can do right now is join the crowd and panic.

I hope you took my advice. As I mentioned above, it would have allowed you to catch one of the most stunning recoveries in history.

But I don’t blame you if you sold your stocks during the plunge.

Going against the crowd is easier said than done…

We’re social animals. We may think we’re rationally calculating the future cash values of the stocks we invest in. With some rare exceptions, what we’re really doing is following the crowd.

It’s hard for us not to join the crowd. And the louder the stampede – in or out of the market – the harder it is for us to resist. As I put it this time last year…

When folks see toilet paper disappearing from the shelves of their local store, they become afraid – even if they weren’t afraid before. Then they hop on the queue to load up on some extra rolls.

The same goes for the stock market. When we see other investors unloading their stocks, we become afraid – even if we weren’t particularly fearful before. And the temptation is to panic sell out of our positions.

Selling triggers more selling. That’s how all stock panics – from the 1929 crash, to the dot-com bust, to the 2008 crisis – build up steam. The panic starts off small. Then it spreads.

I wasn’t the only one at Legacy urging readers to hold on to their positions during last year’s coronavirus crash. I took my cue from the other experts on our team…

“The best thing investors can do is sit still”…

That was colleague Teeka Tiwari’s message to readers in the dark days of last March.

I implore you to leave your long-term investments alone. If you try to get “smart” with your long-term money, you’ll fritter away your capital. And you’ll likely cause yourself an extra five to seven years of work just to recoup your losses.

Again, what we are experiencing is temporary.

Jeff Brown had a similar message for his readers…

Jeff is our tech-investing expert. Last March, he put together an emergency video update with a game plan for his readers.

You can watch it here. It was one of the best calls I’ve ever seen. About 30 seconds in, here’s what Jeff said…

First of all, and most importantly, things are absolutely going to get better. I know it’s a very uncomfortable time in the market. In fact, I can only remember three times over the past 45 years that were like this.

One was October 19, 1987 – of course, that was the notorious Black Monday. Then the period right after the tech bubble bursting [at the end of the dot-com bubble in 2000]. At that time, the valuation of tech stocks was far worse than anything before COVID-19 came around. And of course, during the financial crisis in 2008 and 2009.

One thing is consistent with all three of those crises. They were some of the best times to invest in the stock market. They provided the best opportunities for the largest gains. And I believe that’s where we are right now in the market.

Jeff wasn’t just reminding readers the crash would be temporary… and stocks would recover. He was also reminding them that when others are fearful… you want to be greedy.

Being greedy in a crash is counterintuitive…

But crashes are actually some of the best moneymaking opportunities the market can throw at you.

Quality stocks sell at bargain-basement prices. And buying at these prices supersizes your returns over the long run.

That’s because the lower the price you pay for an investment, the higher your profits will be when you sell.

It’s an entirely different approach to handling market crashes from what you’ll hear about in the mainstream.

Instead of following the crowd and selling, you hold steady. And you scoop up quality stocks as the market puts them on sale.

And contrary to what you may think… the stock market often recovers within months. So you don’t have to wait long to see the returns build up again in your portfolio.